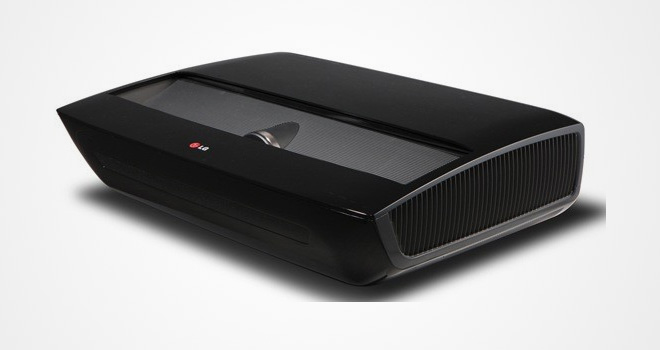 One of the more impressive products at the Consumer Electronics Show would have to be the LG Laser TV – a projector than can beam a 100-inch image from just 56cm away from the screen.

Tech Guide took a closer look at the product on the LG stand at the Las Vegas Convention Centre.

The Laser TV short throw projector defies the usual rules when it comes to regular projectors.

With a projector, the bigger you want the picture the further from the screen you have to take the projector.

But with the LG model, which is available in black or white, the device has a DLP lens powered by a laser light source.

The Laser TV’s lens actually faces away from the screen and is bounced off a mirror to the nearby wall 56cm away and exactly onto the included 100-inch grey projection screen.

And the result is an impressive picture with solid contrast levels aided by the grey (rather than white) screen.

The projector’s brightness was also strong enough for a clear picture even under the bright lights of the Las Vegas Convention Centre on the LG booth.

The LG Laser TV has a built in TV tuner and two 10W speakers so it will be a snap to set up.

Now you can have a 100-inch picture on your wall after mounting the lightweight screen on your wall.

There will also be no cable in around the screen as they will all be connected to the Laser TV in the end closest to the wall so they can be discreetly tucked behind the low entertainment unit the projector sits on.

The LG Laser TV will be available in Australia in the second half of 2013 and is expected to be priced at $9000 which is still a lot cheaper than if you were buying a 100-inch LED TV.

* Stephen Fenech travelled to Las Vegas as a guest of LG.