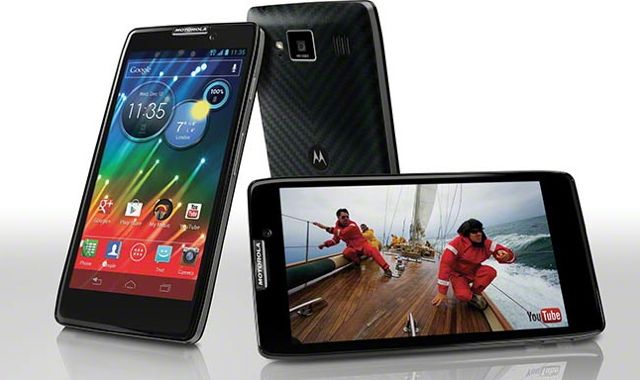 Motorola has thrown its hat into the 4G smartphone ring with two impressive new devices that will be launched exclusively on the Telstra network.

The Motorola RAZR HD is available now with the RAZR M arriving in November.

Tech Guide had a hands on preview of both devices and also took the RAZR HD away for a closer examination.

There are several attractive features of the RAZR HD including one that addresses one of the biggest complaints from smartphone users – battery life.

The battery aboard the RAZR HD is 2500 mAh and, in our testing for the last two days, has soldiered on even with heavy use.

After a full work day using the device – there was still 40 per cent battery left.

The screen is sharp and bright and offers a large window to your content.

The back panel is made of Kevlar so you know it’s going to be strong and withstand all of the daily bumps and scrapes.

The device has a sealed design so there’s no clipping off the back panel to get at the battery, SIM and microSD card.

The tray for the SIM and microSD card is located on the left edge of the RAZR HD but the battery is sealed inside like the iPhone.

And despite its thin design, there is still room for a micro USB port and an HDMI Our port to allow HD content to be viewed on a flatscreen TV.

What adds to the longer battery life with the RAZR HD is another feature called Smart Actions which suggests way to conserve the battery power.

Some of these include adjusting the ringer late at night, lowering the screen brightness and ringer volume and not running background data updates.

This adds hours to the already impressive battery performance of the RAZR HD.

The user interface that runs above the Android 4.0.4 operating system has been designed with simplicity in mind.

The time, weather and battery widgets are right there on the home screen while a single swipe to the right reveals the main settings for easy access to do things like turning wi-fi, Bluetooth and GPS on and off.

Also included is a Guide Me app which can give users step-by-step instructions how to use the main features of the device.

Also on board the RAZR HD is an 8-megapixel camera with full high definition video capability, 16GB internal memory and a microSD card slot to expand that capacity even further.

The RAZR HD is also the first Android smartphone to include Google’s Chrome as the default browser for an even more personalised web experience on the device.

The 4G RAZR HD is available now from Telstra for $5 upfront on the $60 Every Day Connect Plan which includes $600 of value, unlimited texts and 1GB of data.

The RAZR M is also a 4G smartphone that manages to fit in a 4.3-inch screen in a relatively small form factor.

How does it do this? By packing in a screen that goes from edge to edge – in other words the display goes across the entire width of the device.

The borderless appearance significantly reduces the size of the RAZR M and manages to provide a larger screen experience on a device that’s not going to shock you with its girth.

In fact the RAZR M fits very nicely in your hand and will be very popular when it is released in November on the Telstra network.

It has almost identical specs to the RAZR HD including processor, camera and operating system.

The RAZR M is slightly lighter at 126g and has a respectable 2000 mAh battery that will last all day.

The 4G RAZR M will be available on the Telstra network for $0 on the $60 Every Day Connect Plan.

iShower lets you hear your music – under the shower