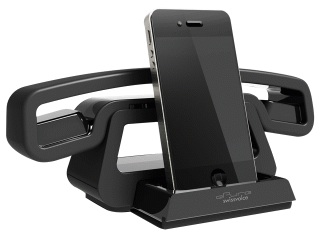 Swissvoice has released a cool new Bluetooth handset to make it easier to take calls on your mobile phone while you’re at home or in the office.

The ePure Bluetooth Station BH01i has a fresh and eye-catching design and connects wirelessly to your mobile to make it even more comfortable to make and receive your calls.

Also on board the device is a retractable charging station for iPhone. It’s the old 30-pin dock connector so if you have an iPhone 5 with the smaller Lightning dock connector you’ll need an adaptor.

The hollow design looks great and only takes up a small footprint on your desk.

The handset itself is also charged by the base and has the controls to pair your mobile and make, receive and end your calls.

Calls on the Swissvoice ePure Bluetooth handset are very clear and, like your mobile, there is no cable to get tangled up with.

Users can also take advantage of Siri – the voice controlled assistant on the iPhone 4S and iPhone 5 – simply by saying the name of the person they’d like to call.

The base gets its charge with a microUSB cable that connects to your computer.

And once you’ve paired your mobile once, the Swissvoice ePure Bluetooth Station BH01i will remember it the next time and reconnect automatically when it’s in range.

But it’s not just about making and receiving calls.

The Swissvoice ePure Bluetooth Station can also stream the music on your mobile.

When the device’s handset is placed horizontally on your desk, it switches to left and right stereo speakers so you can hear your music in decent quality.

The handset’s controls in this mode allow users to navigate their music and also adjust the playback volume.

And, of course if you get a call while listening to your favourite songs, you can simply pick up the Swissvoice handset and answer it.

The Swissvoice ePure Bluetooth Station BH01i is ideal for people who use their mobile phone as their main contact point instead of shelling out extra for a home phone and the monthly line rental.

With this device it will allow the user to keep their mobile aside or on the charging dock while still being able to make and receive calls as if they had a home phone.

The Swissvoice ePure Bluetooth Station BH01i is available now and is priced at $159.

There are other Swissvoice models available including the BH01u which has a universal mobile USB charger ($149) and a corded version – the CH01 ($49).

The CH01 Swissvoice models are available in a number of colours – blue, white, green, orange and pink.