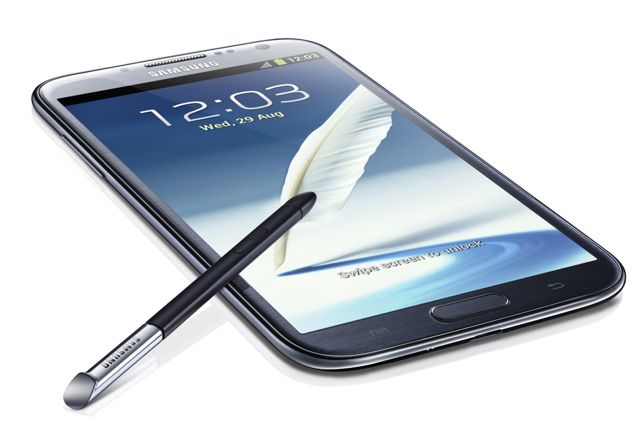 The devices were introduced at a packed media conference by Oscar-nominated film director Wim Wenders who explained how the latest technology is being used to encourage creativity.

“To be creative implies a willingness to take risks and be a bit adventurous,” Wenders said.

The Galaxy Note II is the follow-up to the popular large screen phone/tablet (some have called it a phablet!) Galaxy Note which was introduced at this same event a year ago.

This new version boasts an all-new design that takes its cue straight from the Galaxy S III with more rounded corners and a 5.5-inch Super HD AMOLED screen (up from 5.3-inch).

It also comes with a new S Pen stylus which now boasts a new feature called Air View. This allows users to simply hover the S Pen over an email, a calendar entry or even a picture or video and see the entire contents without the need open the application.

But perhaps the most impressive feature of the Galaxy Note II are under the hood – including a 1.6Ghz quad core processor, 2GB RAM and the latest Android 4.1 operating system Jelly Bean.

The device is just 9.4mm thick, weights 180g and is also 3G and 4G compatible which means it should work on the Telstra and Optus 1800Mhz 4G networks in Australia.

I took a hands-on look at the Galaxy Note II and noticed how fast the device was. The new S Pen is slightly more responsive and gives the same feel as a real pen writing on paper.

The S Pen can also change the ink colour simply by toggling the button on the side of the device.

Another new feature is Pop Up Note which activates as soon as the S Pen is taken out – even during a phone call if you need to write down something during the conversation.

Sitting the new product next to the original Galaxy Note and, despite having a larger screen, we saw that it isn’t that much bigger.

The device is expected to be available in October

Samsung has created a completely new category with the Galaxy Camera which combines a high quality 16 megapixel camera and the latest Android 4.1 operating system.

The device has a 4.8-inch screen – that’s the same size as the screen found on the Galaxy S III.

The devices look like an ultrathin camera stuck to a smartphone.

Now taking and sharing high quality photos is a reality through the 21x zoom lens, optical image stabilisation and with 3G, 4G a wi-fi connectivity onboard to make is easy to send images to friends and to social networks.

There are a number of shooting modes and it can also shoot full high definition video and slow motion movies at 120 frames per second.

It also has a sharing widget which can send your pictures to your family and friends as well as the ability to store them in the cloud to access on other devices.

Pictures can also be shared with other nearby devices with a wi-fi direct connection.