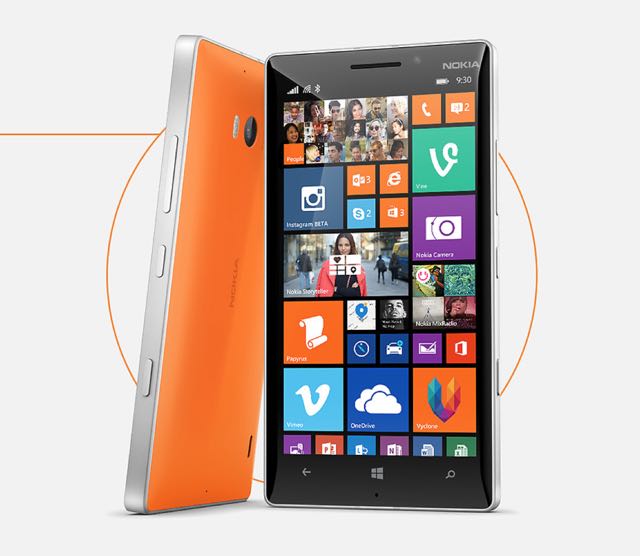 The Lumia 930 is Nokia’s latest flagship smartphone that offers a host of new features, an updated design and the latest Windows Phone operating system.

It is a product the Windows Phone faithful have been eagerly awaiting and delivers high quality hardware Nokia is renowned for.

Microsoft, the company that owns Nokia, naturally runs its own operating system on the device.

The Nokia Lumia 930 matches Android and iOS smartphone in many areas, exceeds them in some and lags way behind in others.

The Lumia 930 has a blocky feel with thick edges. This leaves plenty of room for the volume up and down keys, on/off/lock key and camera shutter button on the right edge.

Along the top you’ll find the sim card drawer (which took us while to prise open) and headphone jack while the bottom had the micro USB charge/sync port and the left edge was clean.

The front is dominated by the 5-inch 1920 x 1080 full high definition ClearBlack OLED (organic light emitting diode) display which has three soft keys along the bottom edge – back, home and search.

The back panel had a gentle curve and was where we found the lens to the device’s 20-megapixel PureView camera and flash.

But the colour of that back panel of our review unit was fluorescent lime green that had potential to hurt your eyes if you looked at it too long. We know another available colour is a bright orange.

For our money we would have preferred white or black – but that’s just us. For those after a bit of colour in their life – the Lumia 930 delivers in spades.

The device is noticeably thicker than other smartphones in this class at 9.8mm and also slightly heavier at 167g.

But that’s not to say it doesn’t have definite build quality. It has – and it felt great to hold in your hands.

We’ve always been a fan of Nokia’s work and the Lumia 930 continues that tradition of craftsmanship.

The Nokia Lumia 930 has a range of features starting with a dazzling 5-inch full high definition OLED display with 441ppi (pixels per inch).

Images and icons are sharp and bright and, because it is OLED, the blacks are blacker and the colours even brighter. You’ll enjoy look at this screen.

Onboard there are lot of features that come pre-loaded on the device including turn-by-turn navigation, public transport transit app, maps plus Mix Radio music app and news, weather, sport and stocks widgets.

One feature we would have liked to see was a microSD card slot to expand the device’s 32GB internal memory. No such luck. But users are given an extra 7GB of free cloud storage with OneDrive.

This is the first Lumia smartphone to come pre-loaded with Windows Phone 8.1 which also brings some new features to the table.

One of the most talked about is Cortana the digital assistant – similar to Siri on the iPhone.

Unfortunately for Australian users it’s not available yet. It has something to do with adapting it for our Australian accents.

Anyway – if you are thinking of buying the Lumia 930 for Cortana you’ll be disappointed. It looks like it won’t be available here till next year.

Users can now also use their own wallpapers as a background for their live tiles on the homepage.

The number of apps for Windows Phone 8.1 is also lagging a fair way behind iOS and Android.

You’ll find all of the major apps but there is still a host of others that haven’t been made for this platform.

By far the best feature of the Nokia Lumia 930 is the 20-megapixel PureView camera.

Nokia has always been at the forefront of camera quality on its phones and it has brought that legacy all the way through to this device.

The camera has a ZEISS lens and 2x digital zoom and a flash operating range of up to 3m.

Users can also opt for auto mode or take control over things like white balance and ISO.

But the bottom line is images are stunning. Excellent colour reproduction in pictures that are crisp and clear.

And in low light situations the dual flash kicks in to illuminate the scene at just the right level.

The 20-megapixel PureView camera is one of the best cameras you’ll find on a smartphone. The other that’s up to this standard is Sony’s Xperia Z2 smartphone with its 20.9 megapixel camera.

If you’re into your photography, the Lumia 930 has a lot to offer you.

On the battery side, the 2420mAh rechargeable cell was slightly behind what we’ve seen with other devices.

For our testing we just got through a day before we had to reach for the charger again.

With a device is this size and thickness we would have thought Nokia could have included a larger battery.

The Nokia Lumia 930 is one of the best Windows Phone devices you’ll find.

It has headline features that make it stand out from the crowd like that amazing camera.

But it is let down by things you won’t find like a microSD card expansion, apps not available for Windows Phone 8.1 and a battery that could have been better.

Nokia’s Lumia 930 is still a top tier phone that will be welcomed with open arms by those users who are happily working within the Windows ecosystem.

But we doubt whether it has the power to lure users away from iOS and Android.

Take your selfies easier than ever with the Bluetooth Selfie Stick