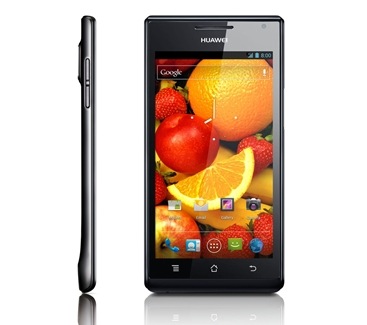 Rather than going through the mobile carriers, the sleek smartphone is competitively priced at $499. The device is unlocked and will work with all of Australia’s mobile operators.

The Ascend P1 is just 7.69mm and weighs a featherweight 110g. It is running the latest Android 4.0 Ice Cream Sandwich operating system.

Also onboard the Ascend P1 is an 8-megapixel camera with dual flash and auto focus which is also capable of full high definition 1080p video capture.

And while the sharp 4.3-inch screen makes your images and videos appear sharp and bright, the Ascend P1 also sounds great with Dolby Mobile 3.0 Plus which actually creates a 5.1 surround sound experience.

The Ascend P1 is equally capable at home or in the office and comes with apps to edit PowerPoint and PDF documents on the go.

Huawei is a relative newcomer to the Australian smartphone market and its decision to adopt the outright purchase model rather than be subsidised through the carriers could work in its favour.

At $499 is well below the outright cost of highly-fancied Android-powered competitors like the Samsung Galaxy S III, Sony Xperia and HTC range.

For those who do purchase the Huawei Ascend P1 outright it’s then simply a matter of either using their existing SIM card or purchasing a SIM-only plan from value providers like Amaysim.

Amaysim offers plans from $19.90 and a $39.90 plan with unlimited calls, texts and 4GB of data using the Optus network.

How to save your computer from Internet Doomsday