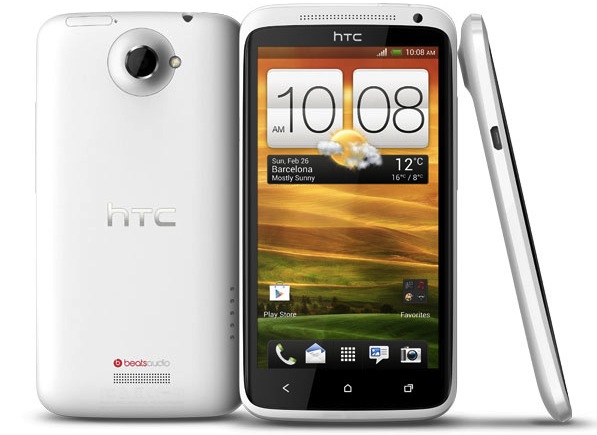 The HTC One X’s badge of honour is that it’s the world’s first smartphone with a quad core processor under the hood.

And with plenty of smarts built into the device those extra processors will come in handy.

The One X has an eye-catching design and a huge list of features and abilities including the Android 4.0 operating system, HTC’s new Sense user interface, an 8-megapixel camera, Beats Audio enhancement and an impressive 4.7-inch screen.

The HTC One X has a slim white casing with a gently curved rear panel. On the front of the device the screen is also curved at the edges.

What impressed us was how thin the device felt in our hands – it’s just 8.9mm thick. It’s also quite light at just 130g.

The 4.7-inch screen of the HTC One X has three virtual buttons just below the display – back, home and recent apps.

The back panel also a sim tray – just like the iPhone.

It also needs to be opened with a special tool – just like the iPhone.

It also takes a micro SIM – just like the iPhone.

The right edge has a volume up/down key while the top has a headphone jack and an on/off/lock key. The left side has a micro USB charging port.

The 4.7-inch screen is a dazzler and because it goes almost edge-to-edge it doesn’t make the device huge. In fact we were surprised that we could easily use the HTC One X with one hand despite the massive screen.

One of the standout features of the HTC One X is the quality of the 8-megapixel camera which is one of the best you’ll find on a smartphone.

Pictures we took with the device were vibrant with warm and accurate colours and a crispness we are used to seeing on pictures taken with dedicated digital cameras.

There are lots of fun settings and shooting modes which will help users get so much more out of the camera.

Among our favourites was the slow motion video and the depth of field setting to capture images usually only a high-end camera is capable of.

The Android 4.0 operating system just adds to the slick nature of the device. It contributes improved text input, spell checking and predictive text.

Users can unlock the HTC One X just by looking at it thanks to Face Unlock.

There’s also NFC (near field communication) to enable data exchange when it comes in contact with another NFC compatible device.

HTC latest version of Sense UI also makes its debut on the One X.

One excellent new feature is HTC Car which puts the device in driving mode.

It turns the device’s screen to landscape mode with large screen icons and maps and phone access right there on the home screen to make it easier to access these features when it is in an in-car mount.

Even with the included HTC earphones the music quality was certainly above average.

If you love music and listen to a lot of it on your smartphone, the Beats Audio technology should make potential smartphones customers give the HTC One X very strong consideration.

In terms of speed, the HTC One X is no slouch thanks to the quad core 1.5Ghz processor.

Right from the get go users will see that speed in action. When switched on the HTC One X starts up and is ready to go within seconds.

When navigating the phone it’s obvious there’s a lot of power and speed in your hands.

Apps open and close instantly and connect to the internet just as quickly if they need to.

This speed also allows users to get to their content quickly as well.

We don’t think the HTC One X is actually twice as quick as a dual core smartphone but it was definitely faster and more responsive.

Now all that speed comes at a bit of a price. The HTC One X’s battery limped towards a full day’s use.

After a complete recharge in the morning we were looking for a charger before dinner time. Admittedly that was with pretty heavy use and with wi-fi turned on for most of the day.

Charging the device also took a while as well. From about 10 per cent battery to full charge took us more than three and half hours.

The HTC One X is a definite step up in class and speed for Android smartphones.

Backed by the speed and impressive design, the HTC One X has a host of features to enjoy and create content.

It is available now through Optus and Vodafone and coming soon to Telstra.