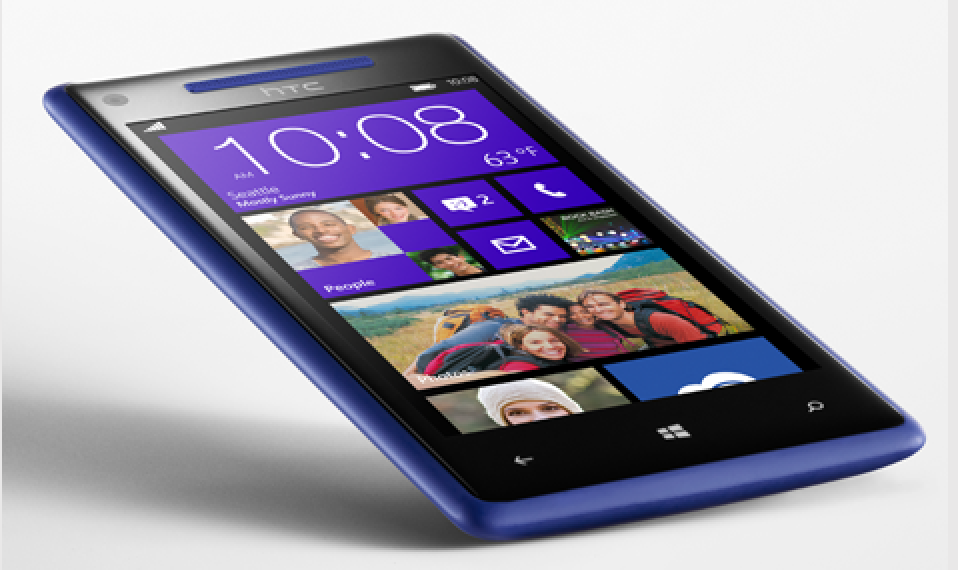 HTC is known for producing some excellent Android smartphones and has now taken that prowess to create the 8X – its new Windows Phone 8 device.

The 8X is a 4G smartphone with a 4.3-inch screen, an 8 megapixel camera, 16GB of internal memory and a 1.5Ghz Snapdragon processor.

And of course it’s running the Windows Phone 8 operating system that will appeal to users who are already working in the Microsoft/Windows ecosystem on their desktop and laptop computers.

One of HTC’s strengths has always been design and the 8X benefits from that expertise.

It sits nicely in your hands thanks to a curved back panel and it has a rubberised feel for added grip and comfort.

The front of the 8X is dominated by the excellent 4.3-inch 720p high definition screen which packs in an impressive 341 pixels per inch (the iPhone 5 has 326 ppi).

Below the screen you’ll find soft keys – back, home and search – and above the screen is a 2.1 megapixel front camera.

Along the top are the headphone jack and the on/off/lock ley. On the right edge are the sim card tray, the volume up/down rocker switch and the dedicated camera button which activates the camera and fires the shutter.

On the bottom edge is the microUSB charge/sync port.

The back of the 8X has the 8-megapixel camera with LED flash and a small speaker grille.

The biggest feature of the HTC 8X would have to be its Windows Phone 8 operating system.

Users are able to pin their favourite apps to the home screen and choose how big or small they like each tile depending on how often you use it.

For example, if you do a lot of text messaging you can make the tile the full width of the screen. And because the tiles are “live” they display the latest message, update or information without the need to open the application.

There’s also the ability to access Microsoft Skydrive online storage and view and edit the Office documents you’ve been working on while you’re on the go.

But the HTC 8X isn’t all about work. Also on board is Beats Audio – a technology that combines with the built-in amplifier to produce excellent sound.

Whether you’re using the 8X for work or play the processor onboard provides nice zippy performance.

The HTC’s screen is also a pleasure to look at. Web pages, emails, pictures and documents look crisp and bright.

On the camera side the main 8-megapixel camera can take decent pictures in good light but we’ve seen better results with other devices like the Nokia Lumia 920 (another Windows Phone 8 device), the Galaxy S III and the iPhone 5.

But what the HTC 8X has over those other models is an excellent front camera that offers a wide-angle view.

The front camera is often used to frame self portraits and now, with the HTC’s wide-angle capabilities, users can fit not only themselves but also their friends and the landmark they want to capture as well.

Network performance is also very impressive thanks to its 4G compatibility on the Telstra network.

The 8X also works on the Vodafone network and will run on its 4G network when it comes online this year.

Another strong feature of the 8X is the battery life which easily lasted a full day with moderate to heavy use.

A minor complaint we had with the 8X was the fact the external buttons on the top and side are almost flush with the edge of the phone and are hard to find if you’re feeling around for it.

There is also no way to expand the memory with a microSD card so all your left with is the 16GB internal memory but users can also utilise online storage with Skydrive.

The HTC 8X is an impressive device that backs its many features with high performance to provide a satisfying experience for users.

If anyone’s looking to buy their first smartphone or are looking for a change from Android or the iPhone then the HTC 8X would be a great choice.

Price: Available on plans from Telstra and Vodafone

The Two Blokes are back Talking Tech in 2013