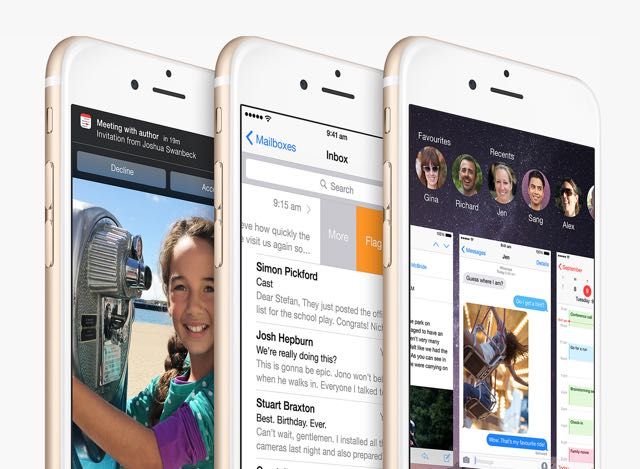 Despite the issues with iOS 8 this week, the new iPhone and iPad operating system has been adopted very quickly. Here are some more hidden features.

After its release just over a week ago, iOS 8 was installed on 46 per cent of all Apple mobile devices within a few days.

But it wasn’t without its problems with some users with around 40,000 customers affected by a bug within the iOS 8.0.1 update that crippled their devices.

Apple took down the update within an hour and yesterday sent out the iOS 8.0.2 update that resolved all of the issues.

iOS 8 is bursting with a number of new features with many you many not even know about.

Here are even more hidden features of iOS 8:

The new iOS 8 update will allow iPhone and iPad users to install their own keyboards to use with their device.

A popular choice has been Swift Key which finally offers iOS users the swipe typing that has been available on Android devices for years.

A new messaging feature onboard iOS 8 is the ability to record and send audio just as easily as you can send a picture or video with your iMessages.

If you don’t want to see the bright colours of your home screen it’s possible to switch to grayscale mode.

Go to Settings > General > Accessibility > Grayscale and a simple toggle of the control turns your iPhone to black and white which is helpful for people with certain vision problems.

When you receive an email from a person who isn’t already in your contact list there is a section at the top of the message that lists that person’s phone number – information gathered from the content of the email – and gives users the option to adding them.

REPLY TO MESSAGES FROM NOTIFICATIONS

If you are using your iPhone and a new text message comes in it usually comes down from the top of the screen as a notification.

But now with iOS 8, users can answer from the notification. Simply swipe down on the notification and you’ll see a text entry window so you can send a quick reply if you need to.

It’s common to be included in a group message but when a lot of people are onboard and there are replies flying everywhere it can get annoying receiving constant notifications.

With iOS 8 you now have the option to either leave or mute the conversation to stop those notifications or messages coming in.

Keeping track of group messages can be confusing but now it’s possible to name each group for easier identification.

Click on Details and pull down on the screen and a text entry field will be revealed to allow you to name the group.

SAVE ATTACHMENTS FROM A GROUP MESSAGE

When pictures and videos are shared in a group message there is now an easy way to view and save those attachments in one place.

Click on Details and scroll to the very bottom of the screen and you’ll see all of that content in one place.