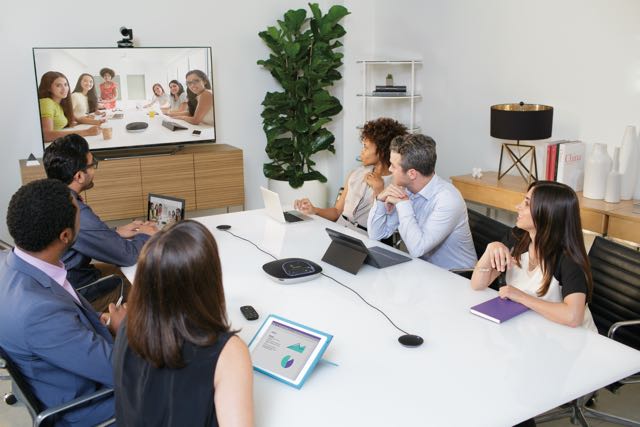 Logitech, a company best know for its keyboards, mice, cases and other accessories, has also made quite a name for itself in video conferencing and has just released some new solutions.

And Logitech and is among the market leaders in this growing market.

Workplaces are changing with open plan layouts and hot-desking which sees employees sitting wherever there is a free desk rather than in the same spot.

Another addition are more conference rooms – also known by the cooler term of “huddle rooms” in start-up companies – and it is here where video conferencing can come into play.

And video conferencing, with Logitech’s range of products, is not just limited to large businesses so you can forget sitting the laptop at the end of the table and have everyone crowd around it.

These affordable suite of products can suit companies from the smallest start-ups to the biggest corporations.

At the high end, the Logitech GROUP ($1,599.95) includes a full high definition 1080p camera that has a 90-degree field of view along with smooth pan and tilt controls to it’s easy to see everyone in the room and clearly see expressions, movements and other non-verbal cues.

It can handle conferences of up 20 people.

There’s also a 10x zoom onboard the camera to zero in on objects or on a whiteboard while maintaining quality and clarity.

It has scalable H.264 video coding so you can get smooth streaming and also works through all the popular services like Skype and Google Hangouts along with cloud services like Cisco Jabber WebEx, Broadsoft, Zoom and Vidyo among others.

Also included in Logitech’s GROUP is a sleek full-duplex speakerphone that provides crisp clear sound so everyone can be heard easily with a 6m diameter of the base.

For larger conference rooms, there’s an expansion microphone pack ($489.95) that can expand that range by another three metres.

Logitech GROUP will work with all video conferencing programs as well as any computing device is a USB connection – PC, Mac and Chromebook.

Companies who already own a speakerphone system can also just purchase the Logitech GROUP full HD camera on its own for $949.95.

But for smaller companies and those that can’t afford top of the line Logitech GROUP, there also the Logitech BCC950 and the Connect which are good for conferences of up to six people.

The BCC950 ($379.95) has an all-in-one design with motorised pan, tilt and zoom on the full HD camera and and integrated omnidirectional speakerphone.

You can also move up to the Logitech Connect ($699.95) – a slick device that has a speaker built onto the bottom of the cylindrical unit and a full HD camera with 90-degree field of view and autofocus.

It also has digital pan, tilt and zoom control and the remote control also doubles as a magnetic lens cover.