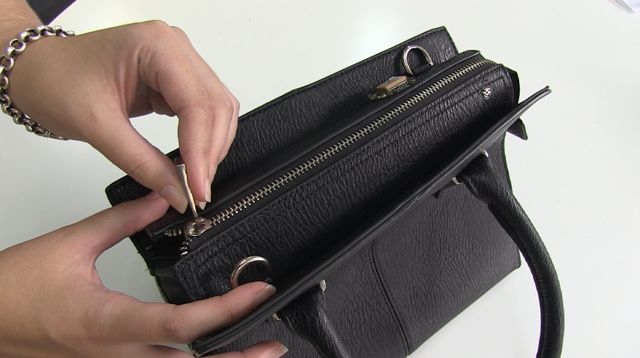 iBag can help you curb your compulsive credit card spending

If you’re having trouble controlling your compulsive credit card spending there’s a brand new hi-tech bag that can help control it for you.

The iBag, which is currently being developed by Finder.com.au, has RFID (radio frequency identification) technology onboard that knows when you take your wallet out to spend.

There’s also a real-time clock that can lock the bag at designated vulnerable spending times of the day.

It even has a GPS chip on board that can detect when the owner enters a shopping centre or any other “danger spending zone”.

When this occurs it triggers the built-in GSM module to send an SMS to a responsible other to let them know you’re being tempted to spend.

If the user ignores this warning and ventures further into the “danger zone” an LED light is triggered on the iBag.

iBag can be just the product for you if you’ve run up high credit card bills because you can’t exercise some spending control.

Finder.com.au is a site that can help users compare credit cards and associated interest rates and annual fees.

The site has decided to make the iBag to not only assist compulsive spenders but to shine a light on a serious problem in Australia.

According to the Australian Securities Investments Commission (ASIC), we’ve racked up more than $34 billion in credit card debts.

A survey commissioned by Finder found 1 in 4 credit card holders don’t pay off their credit card balance in full and roll it over to the next month.

“We started with a handbag for women because our research shows they’re more likely than men to splurge and less likely to pay off their cards in full each month.

“With enough interest in the iBag, we’d love to develop a version for men too, because credit card debt is excessive in Australia.

“The core function of the iBag centres on teaching people to be aware of their spending urges and to help them monitor when they’re using their credit cards.

“The RFID system makes it really easy to do that. You can access the usage logs with software that accompanies the iBag and use it to program it to shut during your peak spending hours.”

Users who are interested in the $199 iBag can register their interest to order the bag in a similar way companies propose concept products on Kickstarter.

If Finder receives enough interest in the iBag it will go into product. You can register your interest here.