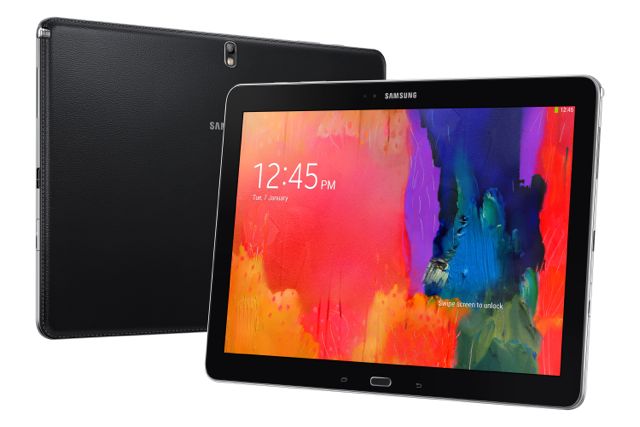 Whoever coined the phrase “good things come in small packages” obviously didn’t have the Samsung 12.2-inch Galaxy NotePRO tablet in mind at that time.

Small is definitely not a word that can be used to describe the device.

This is more a “go big or go home” sort of product and aimed at the user who wants to take advantage of the extra screen real estate.

It’s also the sort of device for the user who wants a tablet that could possibly take the place of their laptop.

On the design side the 12.2-inch Galaxy NotePRO tablet is identical to the smaller Galaxy Note 10.1 2014 Edition.

The size of this device is not going to be for everyone – which is why Samsung has an excellent range of smaller tablets.

It is quite large and also pretty heavy and would be easier to use with a Samsung accessory like a cover to hold it in place for typing or viewing or the keyboard cover that holds the device at a comfortable angle and also provides a physical keyboard.

A tablet of this size puts in the same class as a laptop in terms of portability but it’s still easy to slip it in a bag and take it with you.

The top edge has the on/off/lock switch beside the volume and up and down keys while the right edge has the USB port along with the microSD card slot and the SIM card slot on the 4G models.

There’s an 8-megapixel camera with flash on the back along with a 2-megapixel front facing camera for video calls and selfies.

It has the same stitched leather rear panel and silver edging along with the similar home button.

Of course, there’s also the S Pen that tucks away into the top right corner of the device.

The larger screen gives users an even larger canvas for writing, drawing and sketching.

In fact, the screen is only slightly smaller than an A4 sized piece of paper and that’s a lot of room to fit in your notes and drawings.

Speaking of the large 12.2-inch WQXGA TFT LCD screen, it has a resolution of 2560 x 1600 which is made up of more than four million pixels.

It is bright and clear and great for work or play. It has 247ppi (pixels per inch) and is sharp and bright.

Whether you’re watching a movie or working on a document – the screen looks great.

On the work side the ability to multi-task is a big draw card for customers who need to stay productive on the move.

The display can be divided in to up to four sections to run four different apps at the same time and also drag and drop between the open windows.

Once you have this capability it’s hard to go back to a device that doesn’t offer that multiple window functionality.

Users can create and edit documents on the move with Hancom Office. The version included with the Samsung Galaxy NotePRO can view documents created with Microsoft Office.

If you want to create and edit these documents as well as your own, then the full version of Hancom Office can be downloaded from the Samsung App Store for full editing functionality.

Having the S Pen is also a useful tool for productivity and creativity on the go with the Galaxy NotePRO.

It powers many functions apart from just writing on the screen.

When the S Pen is removed from its slot Air Command is automatically launched and offers features which can be immediately accessed.

Screen Write – you can write directly on the screen and save it.

Pen Window – lets you draw another window anywhere on the screen to open up another app in that space.

Writing on the screen is smooth and responsive as if you’re writing on a real piece of paper. Although real paper doesn’t let you erase what you’ve just written as quickly or easily.

But even typing on the screen’s virtual keyboard is also quite easy thanks to the size of the screen.

The virtual keyboard across the width of the large 12.2-inch screen is actually a full size keyboard and we were able to type easily, quickly and accurately.

This got a big tick from us because typing on the on-screen keyboard on smaller devices we always found difficult.

On the performance side there is a 2.3Ghz quad core onboard the 4G/LTE Galaxy NotePRO.

The device is fast and smooth and it’s quick and easy to open apps and navigate the screens and menus.

On the connectivity side there’s 4G, wi-fi, Bluetooth, DLNA and Kies which can be used to sync to your PC.

The camera takes surprisingly good images if you’ve got the strength to hold the device long enough to capture your picture. If you do, you won’t be disappointed with the results.

The pictures aren’t as good as those that your smartphone can capture but it’s not too far behind.

Having a larger device means you’ve got a larger battery and the Galaxy NotePRO delivers here.

The battery lasted for two days between charges which is good news for users whether you’re using the Galaxy NotePRO for work or play.

The 12.2-inch Samsung Galaxy NotePRO isn’t for everyone but those who take on the extra size will not feel disappointed.

But it’s not just extra screen size the customer takes on but the extra price – it costs $1,099.

Overall the Samsung Galaxy NotePRO is a quality product with the power and size to be a real laptop replacement.

But the Samsung Galaxy NotePRO is a delight to use and the extra room on the screen gives the device a luxurious feel.

Price: $1,099 – also avaiable through Optus and Telstra on contract