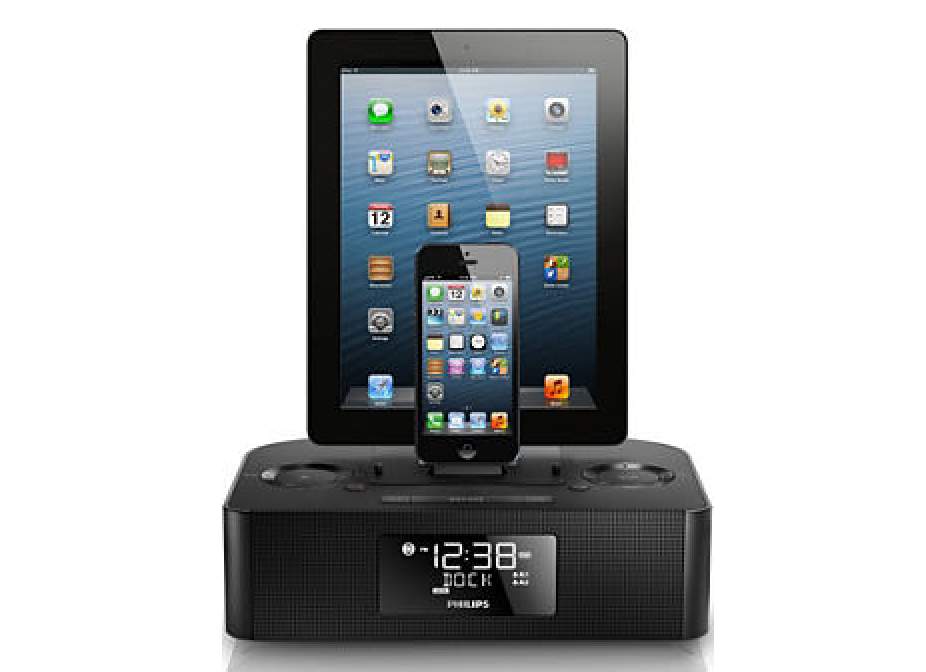 What’s better than one dock for your iPhone or iPad? Answer: Two docks – and that’s exactly what you get with the Philips Dual Dock Clock Radio.

The Philips Dual Dock Clock Radio AJ7260D/79 has docks that will suit any iPhone or iPad.

The first dock has the traditional 30-pin connector for older Apple devices like the iPhone 4S, iPod Touch fourth generation and the iPad third generation and earlier.

The second dock has the newer Lightning connector which was introduced with the iPhone 5, iPad fourth generation, iPad Mini and the iPod Touch fifth generation.

Each dock can easily accommodate an iPad or iPhone and can charge the devices while they’re connected. It’s possible to charge a third device from the USB port on the rear panel.

Onboard is 8W RMS total output through the two Neodymium speaker drivers and it produces a clear crisp sound with excellent bass for a product of this size.

Users can also connect other devices using a cable through the Audio In port on the back.

While we loved the quality of the playback we would have loved a remote control to control our music. Unfortunately there wasn’t one in the box.

There’s a digital FM radio included with the ability to set a number of presets but if you’re a fan of AM radio – you’re out of luck. The only way to listen to AM radio through the Philips clock radio is through an app like TuneIn Radio.

And you don’t have to worry about manually setting the time. Simply plug in your iPhone or iPad and the Philips Clock Radio will automatically synchronise from your device.

There are dual alarms which can be set for couples who want to wake up at different times or can be used to set a weekday alarm and a later weekend alarm.

You can choose to wake up to your own music from the docked device or the radio and gradually rises in volume to ease you out of sleep rather than blaring suddenly.

One annoying feature of regular clock radios is losing the time when you lose power or accidentally unplug the device from the wall.

Not so with the Philips Dual Dock Clock Radio because it has a back-up battery to maintain the clock and the products settings.

Users can install to AA batteries to have this back up but you can’t power the entire device with these batteries and use it as a portable – it needs to be plugged in.