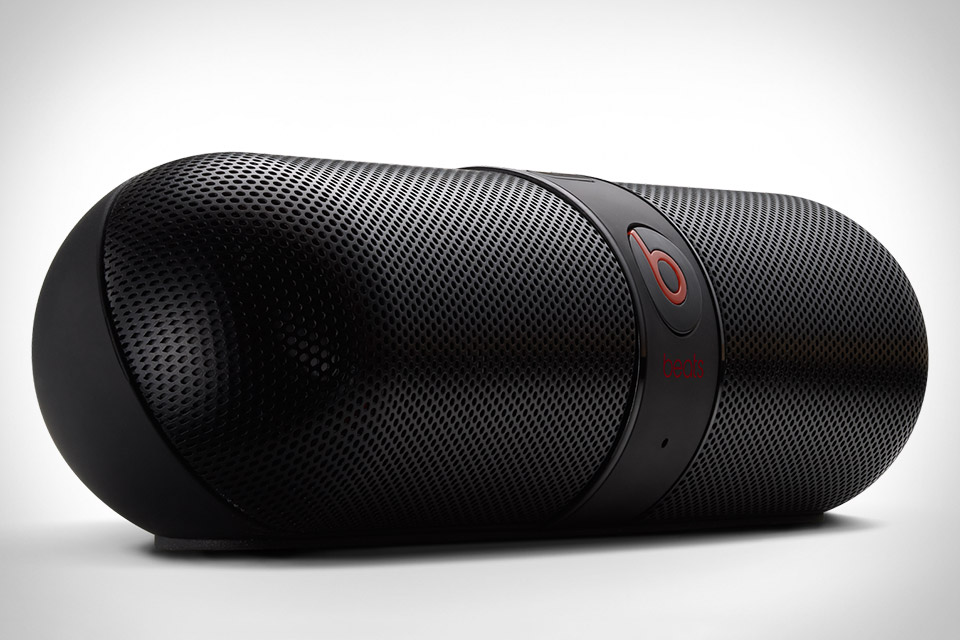 The Beats Pill by Dr Dre is a small, portable Bluetooth speaker that looks, well, like a pill and it can stream your music from smartphone, tablet or laptop.

When it’s connected to your smartphone it can also act as a handsfree speakerphone to make and receive calls.

The device is 19cm wide and 4.65cm high and weighs 310g so it’s not going to take up too much room or weigh down your bag if you want to take it with you on your travels.

And being shaped like a pill it has a rounded surface and a flat base so it rests with the four onboard 1-inch speakers positioned at a slight angle up towards the listener.

On the front of the device is a large button which serves many purposes including setting up the Bluetooth pairing and answering and ending calls.

On top are volume up and down keys while the back of the product has the on/off button and audio in and out ports.

The Beats Pill also has NFC (near field communication) onboard so it can pair with a single touch with compatible products like the latest Android and Windows Phone devices.

Small Bluetooth speakers seem to be the product of the moment with plenty of competition in this category coming from other companies like Bose, Logitech’s UE and Braven just to name a few.

What the Beats Pill brings with it is a bit of street cred. Beats headphones by Dr Dre are already a popular product so you’d expect similar performance from the Beats Pill.

Listeners expecting the same audio performance from the Beats Pill that they get from Beats headphones may be slightly disappointed.

It was loud enough to fill a room but sounded a little thinner than we expected but still produced a respectable sound.

Bass is a major ingredient in the sound mix for Dr Dre’s headphones but it was also lacking in the Beats Pill.

And with the speakers positioned so close together, there’s not much in the way of stereo separation.

Users can choose to connect a device physically with a cable into the audio in port instead of streaming via Bluetooth.

The Beats Pill also has an interesting audio out feature as well which can turn the device into a bridge to wirelessly link the device your streaming to the speakers with a larger audio system or home theatre receiver to hear your tunes on an even grander scale.

On the battery side a fully charged Beats Pill will last about five and a half to six hours and that’s even with solid use.

The device also comes with a handy carry case plus cables and a carabiner to keep it safe and keep it handy when you’re on the move.

Priced at $259, the Beats Pill is more expensive than the excellent Bose SoundLink Mini speaker ($249) and the quirky but high quality UE Boom speakers ($199.95).

But the Beats Pill adds the handsfree speakerphone ability along with audio out which these other speakers don’t provide.

Beats Pill has cool look and feel and provide an impressive sound that might not be up to par with Dr Dre’s headphones but that are good enough to enjoy your music in the open anywhere you go.

New iRescue kit can save your wet smartphone