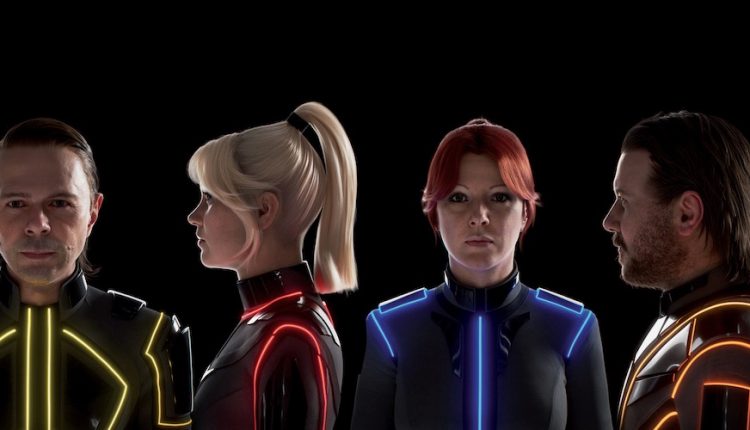 Abba has released its first new music in decades and will play a virtual holographic concert in a purpose built arena in London in May 2022.

Abba’s Bjorn Ulvaeus spoke to Zane Lowe on Apple Music 1 about the band making its first album in 40 years – Voyage – which will be released on November 5.

In the interview, Bjorn talks about two new songs – I Still Have Faith In You and Don’t Shut Me Down and how the band never thought it would ever get back together again.

The band has been busily filming the holographic live show using motion capture suits and effects created by Industrial Light and Magic.

Digital versions of Benny Anderson, Agnetha Faltskog, Anni-Frid Lyngstad and Bjorn Uleaus will appear with a 10-piece live band in a venue in London’s Olympic park in May 2022.

The concerts will include 22 songs including the two new singles and a selection of the band’s biggest hits.

Apple Music Hits is airing a full day Abba takeover where they can hear the new songs and also relive their band’s biggest hits.

Here’s are some snippets from the interview:

Björn Ulvaeus: We knew that we had these bonds, obviously. We’d see each other every now and then, but it was especially clear when we were in the studio for the first time for this album, together, because that was so strange and wonderful at the same time. Everything came rushing back, like it was yesterday. This was a very familiar, normal situation we were in, the four of us. “Yeah. Okay. We’re recording,” like it was yesterday.

…I looked around and I looked into Agnetha’s eyes and Frida’s eyes and there was the same kind of feeling, the warmth and the friendship and the bonds, between us that, as you suddenly realize no one on earth has experienced this kind of relationship that we have because, thinking about it, it’s true, nobody else has. Sadly, people die and they don’t stay on friendly terms for their whole lives, but we have. And I’m so incredibly happy for that.

ABBA’s Björn Ulvaeus Tells Apple Music About “I Still Have Faith In You”…
Björn Ulvaeus: When Benny sent me a demo of that melody, I knew it had to be about us, but at the same time, lots of people in lots of situations will find that, yeah, this is about them, too, because I love to have hidden layers in the lyrics. And ‘I Still Have Faith In You’ can be read in many different ways. I mean, you get what’s face value and that’s about us, but the others, you’ll have to think, yourself.

We didn’t know what to expect when we went into the studio. We knew that, “Oh, it might just be that we don’t have it anymore,” and then realizing that we have something to give and something to say. That was an incredible feeling. In both songs, as you say, there is a lot of that, the happiness and joy of being able to come back like this and being proud of it.

ABBA’s Björn Ulvaeus Tells Apple Music ‘Voyage’ Is The Follow Up to ‘The Visitors’…
Björn Ulvaeus: That Benny and I wrote and we recorded the songs as best we could and it just happened to be a lot of people out there who liked it. And we’re doing the same thing now. We’re holding our noses and diving. Anything can happen. We don’t know how this will be received, we just know that we’re as proud of this as we were back in the ’70s. This is the followup of ‘The Visitors’. It’s 40 years apart, but it’s still very much the latest album, if you know what I mean. I don’t see it as a standalone thing. We take all that wonderful baggage that we have with us into this production, as well.

ABBA’s Björn Ulvaeus Tells Apple Music He Was Prepared For Frida and Agnetha To Say No To A Reunion…
Björn Ulvaeus: We were prepared for them saying no. Yes. It would’ve been understandable, but no, they didn’t, because they’re both… They like the creative side of things. Pop star glamor, we’re all totally unimpressed by that, but to be creative in the studio, that’s something else, just to be us, just to try things and see what it sounds like. That is something that none of them ever has been negative towards, I think. It’s just that, somehow, it never happened. It’s strange it took this long, but now it did, all of a sudden. Some key turned and … yeah.No, I can’t think of any moment that we seriously or one of us seriously wanted to do something and the others said no. All these 40 years, we’ve been quite unanimous in not wanting to do something.

ABBA’s Björn Ulvaeus Tells Apple Music About Taking a 40 Year Break…
Björn Ulvaeus: We ended, and for creative reasons. We ended because we felt the energy was running out in the studio, because we didn’t have as much fun in the studio as we did this time. And that’s why we said, “Let’s go on a break.” And we never said, “This is it. We’ve split and we’ll never reunite again.” We never said that. We just said back then that we’d go on a break. And this break has now ended. Sounds strange…

ABBA’s Björn Ulvaeus Tells Apple Music About The Group’s Enduring Legacy…
Björn Ulvaeus: Yeah, I know that we did ‘Mamma Mia’, the musical and the film and so forth, and Universal did it with ABBA Gold, but still, how is it possible that, generation by generation, something seems to appeal and that the songs still are played as much as they are? Benny and I have been asking ourselves that question many times. Honestly, I don’t know. I don’t know what it is. I just know how we wrote them and how we recorded them and how we created the stuff. I don’t know why they live on the way they do.

It’s like it belonged to everyone who likes it, everyone who comes up to me and says, “Oh, you don’t know how much your music has meant to me in my life.” Almost every day, I get that. I’m always very humbled by it. And I feel that, yeah, it’s your song now. The funny thing about memories with songs is that a lot of people have memories with our songs, I mean, their first date, their first kiss, but Benny and I have hardly any memories at all of writing them because we wrote them in the same way, almost all of them.

ABBA’s Björn Ulvaeus Tells Apple Music About The ‘Voyage’ Live Experience…
Björn Ulvaeus: We’ve been meandering, to say the least. It’s gone that way and, oh, Jesus Christ, and that way. It’s been four and a half years now, but finally we’re on the track. And what attracted me, personally, in the beginning, was I have a kind of scientific curiosity. I had a vision of, “What if I, as in my 1979 self, could speak to any audience and I could watch that sitting in the audience, watching myself do that? And if we create that, what can we do next, and next?” There’s vision upon vision of strange and weird and wonderful things you can do. And knowing that we’re the first to do it is also a factor why we were so attracted to the idea.

This is the forefront. This is a new frontier in entertainment, I think, live and these avatars together and the audience not knowing what is what, in the end, and being absolutely not certain where the screen starts and where it ends. I think it’s going to be a wonderful concert experience, but something people never have seen before.

Telstra gets behind vaccination push with #LetsVaxx message on your smartphone