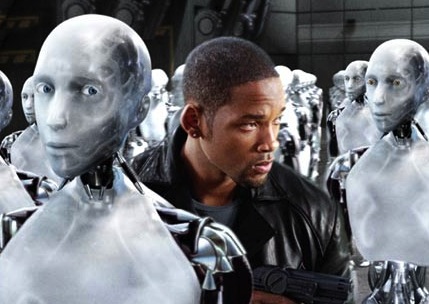 How 20th Century Fox converted I, Robot from 2D to 3D

Demand for 3D content in the home is increasing rapidly. So much so 20th Century Fox has developed new technology to covert popular 2D catalogue titles to 3D.

The popular Will Smith film I, Robot has become the studio’s first title to be converted from 2D to 3D for re-release not in cinemas but in the home on 3D Blu-ray. It is available in stores today.

With the increased penetration of 3D TVs and 3D Blu-ray players in the home, the hunger for more content is on the rise but there is only so much content which can be produced each year.

There are more than 15 million 3D TVs around the world along with 16 million dedicated 3D Blu-ray players and more than 20 million PlayStation 3 consoles which are also capable of playing 3D Blu-ray Discs.

So with all of this hardware in the market there are more and more requests for more 3D live action titles both from retailers and customers.

We’ve already seen recent 20th Century Fox releases like Titanic and Prometheus which offer the viewer both the 2D and 3D versions of the film.

While most of the blockbusters hitting cinema screen have been shot in 3D, 20th Century Fox Home Entertainment asked the question – how do we dip back into the library and take our favourite movies and make them 3D?

Fox partnered with JVC Kenwood to develop technology, workstations and complex algorithms to take a 2D film and add the extra image for our other eye to create a 3D product.

I, Robot was chosen for a number of reasons. Firstly it is one of Fox’s most popular Blu-ray titles and, secondly, has the look and feel that would make it a suitable 3D candidate.

“The trick to converting 2D to 3D is that we have to create two images and then show them to you one for your left eye and one for your right eye,” Mr Harvey said.

We were inside what Mr Harvey called “The Lab” on the 20th Century Fox lot in Century City in Los Angeles. Inside were a number of TVs and Blu-ray players so Blu-ray Discs can be viewed across a wide range of products.

“We create the right eye image from the left eye and the reason we do that is because, in a Blu-ray environment, that left eye becomes your 2D version and that’s the original 2D version that the consumer saw.”

The first step of the process is to create a depth script – that depth script then says what items need to move forward and back.

The next process is called Rotoscoping where each element is identified, outlined and designated to be moved forward or back in every frame of the film.

The benefits of the JVC Kenwood technology is that it can follow that process automatically.

This automation saves valuable time when you consider how long it would take to manually perform this operation on every frame of the film.

Next step of the process is to create the second image for the other eye which means shifting the mask but as you complete this shift there is often missing information and missing elements of the picture.

The JVC Kenwood tool comes into play here once again and provides a way to paint in that missing data that would normally have to be done by hand.

But the whole process is not perfect with missing information and distortion still present after the JVC Kenwood 2D to 3D system has done its work.

Which is why every frame is inspected manually with the necessary touch-ups and adjustments applied.

But that’s not the end of the process.

Rotoscoping and painting are good for creating depth but without any thing else the elements will look just like flat cardboard cut outs.

Which is where the final piece of the puzzle falls into place – embossing.

Elements need to be given volume and curvature to avoid that flat cut out look.

“A face doesn’t look flat or like it’s cut out – it has to look like a natural 3D image,” Mr Harvey said.

“We have to provide volume or else you look like a cardboard cut out.”

Apart from adding that extra volume, embossing also has to adjust colour intensity as well as light and dark shades.

As was the case with I, Robot – when all is said and done – the result is remarkable.

We’ve seen the completed film and were astounded by the results.

The depth and 3D effects were remarkable and look quite natural. So much so you could be forgiven for thinking the film was shot in 3D in the first place.

I, Robot director – Australian Alex Proyas – was unavailable to assist Fox with the 2D to 3D conversion but Mr Harvey says future 2D to 3D projects will be undertaken with the involvement of the director if they are available.

And while this process is very impressive Mr Harvey says it won’t be a substitute for shooting a film in 3D.

This technology has answered on of Fox’s biggest questions – how do we go back to that library and convert films to 3D?

It would be safe to assume there will be a number of Fox films earmarked for a 2D to 3D conversion to be re-released on Blu-ray Disc.

Another Fox hit – Independence Day also starring Will Smith – has already been earmarked for a 2D to 3D conversion but this will be re-released in cinemas first before we see it on 3D Blu-ray.

* Stephen Fenech travelled to Los Angeles as a guest of 20th Century Fox.