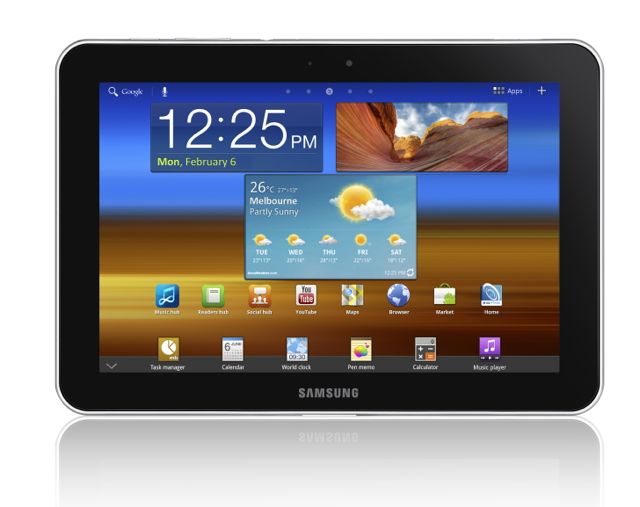 4G and tablets have been the subject of much discussion this week with the ACCC taking Apple to court over the new iPad’s ability – or lack of ability – to connect with Australia’s one and only 4G network.

But if it’s a 4G tablet you want, the Samsung Galaxy Tab 8.9 is still the one and only device that ticks the box.

Apple’s new iPad despite having the 4G label only connects with the 4G networks in the US and Canada.

But here in Australia we’re only up to 3G with Apple products although the new iPad does has HSPA+ dual channel which, if you’re a Telstra customer, will make it even faster the iPad 2 on 3G.

But if it’s a 4G tablet you want and are happy not having a picture of a piece of fruit on the back then the Samsung Galaxy Tab 8.9 is the product for you.

We were regularly getting speeds over 20Mbps with the Galaxy Tab 8.9 in the Sydney CBD while the best the new iPad, with a Telstra sim-card accessing HSPA+, could manage was double figures.

Samsung got in just ahead of the new iPad announcement and release when it launched the Galaxy Tab 8.9 onto the market.

It wanted to be the first 4G tablet in Australia and succeeded. But after news of the latest iPad’s incompatibility with our 4G the Galaxy Tab 8.9 remains the only 4G tablet.

After the ACCC callied Apple out on the 4G claims of the new iPad, the computer giant said it was willing to offer refunds to customers who may have been confused.

Interestingly a reader contacted Tech Guide and said he’d bought a new iPad from the Apple Store in George St and wasn’t told anything by staff about it not working on 4G – the whole reason for the ACCC’s action this week.

He then he crossed the road to by a micro sim from the Telstra Store and, before he paid for it, was warned it was not 4G compatible.

Telstra also reminded the customer that the Samsung Galaxy 8.9 was still Australia’s one and only 4G tablet.

The device is slightly smaller than the iPad with an 8.9-inch screen and small enough to hold in one hand on portrait mode.

But the Galaxy Tab 8.9’s trump card is 4G and this allows for faster web browsing within the range of Telstra’s growing 4G network.

Having this extra speed is also good for online gaming and streaming videos and music to the device.

The Samsung Galaxy Tab 8.9 4G tablet is available now from Telstra on $49 data and tablet plan or outright for $840.