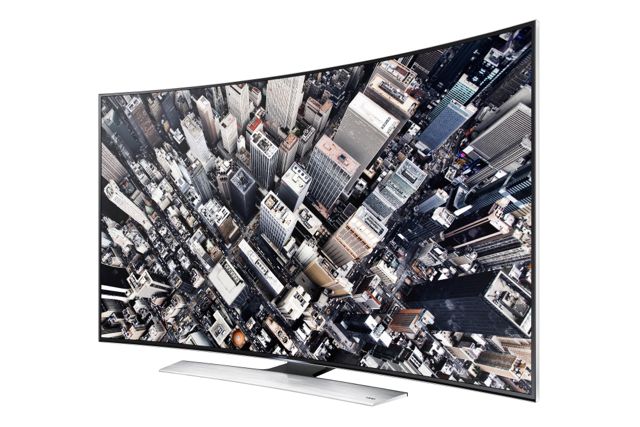 Samsung has released its new 2014 range of TVs that includes the company’s first curved ultra high definition models for even more immersive viewing.

Samsung will offer curved models in its Series 8 and Series 9 range that will start at $3,799 for the 55-inch curved high definition LED model all the way up to $16,999 for the deluxe 78-inch curved Ultra High Definition curved LED TV.

And while Samsung is banking on curved TVs being popular in the market, there are still flat ultra high definition televisions that still make up a good portion of the new line-up.

The curved panel of the Samsung TVs offers several advantages.

The very shape of the TV, where the edges are closer to the viewer than the centre of the TV, offers a more immersive experience.

Part of the technology on board includes an Auto Depth Enhancer – a proprietary algorithm that adjusts the contrast in real time to create an even greater sense of depth.

Side by side with a similar flat TV and you notice the added depth of field that’s part of the curved TV shape.

Samsung’s Ultra High Definition TVs also include Multi-Link which can divide the television’s screen into four sections – each section full high definition – to allow apps and programs to run at the same time.

Samsung’s new panels are also powered by an updated quad-core processor for even faster and smoother performance.

And despite the curved shape, it is still possible to mount the Samsung television on the wall using a special mounting kit.

And of course the new products are smart TVs so there is motion and voice control including “finger gesture” that allows viewers to adjust the volume and change the channel with their finger.

The new TVs are also compatible with the Samsung Evolution Kit so anyone buying one of these new panels will be able to update the operating system, processor and inputs and future-proof their purchase.

Stay tuned to Tech Guide for a full review of the new Samsung Series 9 curved TV in the coming weeks.