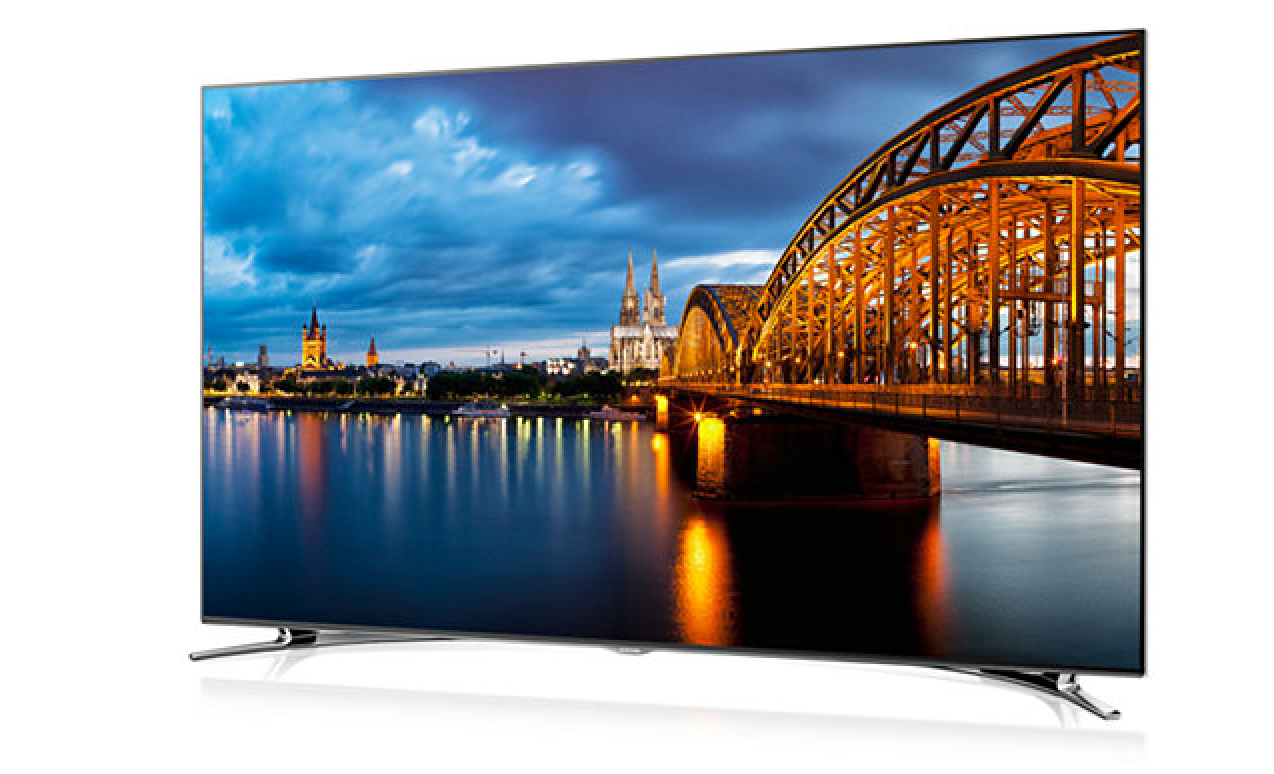 The company has raised the bar in every aspect of this LED TV and combines sleek design and functionality with superb picture quality and intelligent features.

The frame around the F8000 is barely 5mm thick so virtually all you’re seeing is the picture. Even below the screen the frame had to expanded slightly to fit in the Samsung logo.

At only 34.9mm thick, the F8000 is quite slender and sits on a silver arc shaped stand that can barely be seen from the front of the TV.

But right off the bat we saw a problem with the stand. The ends of the stand are about 1.2m apart and that means you need a surface at least that wide to rest it securely.

Other TVs usually have a smaller central stand that allow them to sit on a smaller surface even though the edges of the screen hang off the sides.

That’s not possible with the F8000 so best measure exactly where you want to put this TV if you’re thinking about buying it.

The alternative is having it wall mounted.

That aside, the TV is undoubtedly sleek and well designed.

A small camera located at the top of the screen springs out with the touch of a finger and gives the F8000 an eye on the world for Skype video calls, Face Recognition and gesture controls.

The standouts of the F8000 are without a doubt voice and gesture control and the clever S Recommendations.

Starting with voice control, users are able to talk into the second smaller remote (yes, there are two remotes) which has a dedicated voice key and microphone to hear the command or question.

You can say things like channel up or channel down, volume up, volume down, adjust volume and record.

Viewers can even ask the time or set the volume at a certain level.

The Samsung TV was surprisingly accurate at recognising what we were saying.

But we did experience times when the Voice Control was activated on its own after hearing a noise or part of a conversation. On a couple of occasions the channel even changed on its own.

We couldn’t explain why this happened but thankfully it was a rare occurrence.

The other half of the impressive voice controls is the S Recommendations where the TV can help you find programs and recommend free to air programs that might interest you.

For example you can ask what time a certain program begins or movies starring certain actors.

The results would appear at the bottom of the screen with a number above and you simply state the number of the selection to set a reminder for that show or watch it live if it’s already started.

Samsung’s Series 8 F8000’s voice recognition is the result of extensive research and fine-tuning with the aid of Macquarie University and their natural language processing.

This gives the TV the ability to pick up key words and phrases and make sense of what the user is saying without restricting the viewer to a certain number of exact phrases.

You could also ask to watch specific shows and what times certain shows start.

With the gesture control you can activate this simply by waving your hand in front of the TV.

A hand symbol appears on the screen and you can adjust the volume or access the Smart Hub.

Users move the pointer around the screen and then make a fist when they want to click on the icon. This is handy but it takes a lot longer than just picking up the remote because you needed a pretty steady hand to move that cursor around accurately.

How hard is it to just pick up the remote and adjust the volume or change the channel?

The Smart Hub is the central part of the smarts of the F8000 and it’s here you’ll find apps, social media, YouTube and your content and recordings.

And because the TV is connected to your network you can also tap into the content on other devices. Samsung’s new Cloud storage allows users to access their content on other mobile devices along with in the F8000 itself.

The second smart remote also has a small trackpad that makes it easier to browse the menu and the web on the TV’s web browser in the same way you would on your laptop.

The full high definition Samsung Series 8 F8000 looks great on the outside but is also pretty impressive on the inside.

Under the hood, the TV has a quad core processor along with technology called Clear Motion Rate to ensure a smooth image even when watching sports and action films.

We watched a lot of sport on the F8000 and found the refresh rate was fast enough to remove virtually all picture judder. This means no ghosting or blur around fast-moving figures and shapes.

The colours on the screen really popped with excellent greens, reds and blues. Skin tones were also rendered to look quite natural.

Overall the picture has a nice balance – not oversaturated and with impressive contrast.

One thing that helps the contrast level of the F8000 is the Micro Dimming that actually analyses every frame in real time and adjusts the LED edge lights to optimise the darker and lighter parts of the screen.

Picture clarity was also exceptional with crisp images and plenty of detail especially when watching HD content and Blu-ray movies.

The clarity is also helped along by the structure of the actual panel which is designed to absorb external light and minimise reflection.

And don’t forget the F8000 also had your 3D viewing covered as well with the same excellent picture quality in the third dimension as well.

The active glasses are so lightweight you’ll forget you’re even wearing them. The eyewear has come a long way since those first models a few years ago.

Also onboard is a 2D to 3D convertor which can turn regular content into 3D but it doesn’t compare to watching actual 3D content.

On the audio side the sound was acceptable but lacked a little authority. It’s hard to pack in a powerful speaker in a panel that’s just 3.5cm thick so we’d recommend a soundbar or integrating the TV into a home theatre speaker system.

Thankfully Samsung make these as well so at least you can use one remote to control everything – and of course you’d still have gesture and voice control.

Samsung has produced its best ever TV with the Series 8 F8000 by expertly combining sleek design with cutting edge technology that can be enjoyed for years.

What will aid its longevity is the compatibility with the new Evolution Kit which can plug into the rear panel of the TV and upgrade it each year to the latest software as well as including the latest processor.

The TV is not cheap with a RRP of $4,199 and, although you might find a little cheaper on the shop floor, it’s still quite an investment.

But you get what you pay for – a television that is unrivalled in terms features, picture quality, connectivity and smart technology.