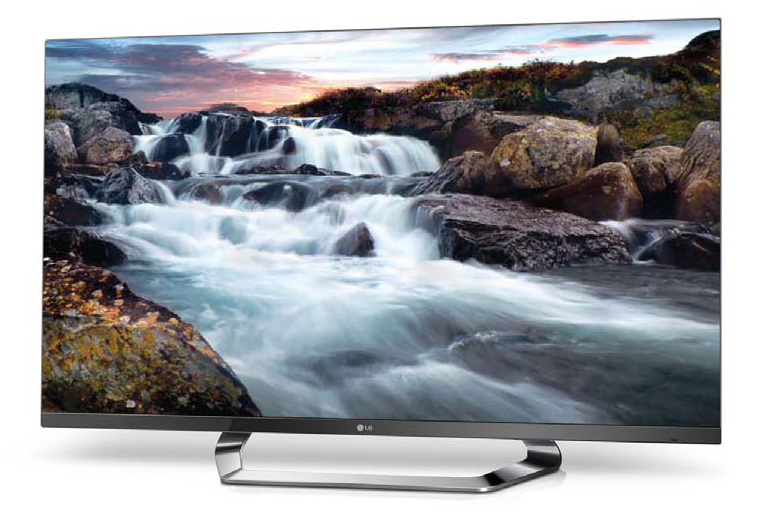 LG’s new 55LM7600, part of the company’s 2012 range of Smart TVs, is a leap ahead of last year’s model in terms of design, style and functionality.

The new 55LM7600 has a 55-inch LED screen with a thin frameless design, U-shaped stand, full internet connectivity and access to lots of online content.

And LG has stuck to the Cinema 3D technology which provides high definition 3D viewing using lightweight passive glasses similar to those used in the cinema.

The LG 55LM7600 has a standout look with a virtually frameless design to give people nothing to interfere with their viewing experience.

The metallic frame around the outside of the screen is 1mm thick with a black 1cm border around the display.

Along the bottom the frame is thicker with the LG logo centered along this edge.

Underneath is a U-shaped stand that makes the panel look like it’s floating on air.

A clever central hinge that’s out of sight on the back of the stand allows users to also turn the TV at a different angle with ease.

The panel itself is also quite thin – it’s only 3.3cm thick.

Even though there are lot of bells and whistles on the 55LM7600, the first and most important feature of the TV is the picture quality.

And excellent picture quality is what you get. It’s a huge improvement on the 2011 range of LG’s smart TVs

The LG’s full high definition LED screen has a refresh rate of 200Hz and supports local dimming which means it can lighten and darken various areas of the screen when required.

The result is excellent contrast and black levels which would challenge even the best plasmas.

Complimenting the full high definition was the impressive picture clarity with even the finest detail clearly on display. Colour reproduction was also warm and natural.

Another big improvement was movement judder, or in fact, the lack of it on the new 200Hz LG Smart TV.

There was only the slightest hint of judder with fast moving objects and watching sports but hardly something that will affect your viewing experience.

3D is offered using the passive glasses which are cheap, lightweight and don’t need recharging.

LG’s Cinema 3D is high definition and, while the benefit of the passive glasses is no flicker, the downside is the slight lack of detail which full high definition provides.

Watching 3D Blu-ray movies was still possible but the resolution was not true full high definition.

3D also comes with a depth control so viewers can actually control just how immersed they’d like to be.

It also has 2D to 3D conversion which works well if you’d like to see your favourite programs 3D.

This presented good 3D for viewing with plenty of depth and layering but looked more like cardboard cut outs and lacked the smoothness of native 3D.

When it comes to connectivity, the new LG 55LM7600 delivers. It

Users can connect either with an Ethernet cable if they have one handy near the TV or by using the built-in wi-fi.

At your disposal is a web browser, a range of handy apps plus links to movies and other content.

Our favourite built-in apps were the ABC iView catch up TV and the NRL game analyser from Telstra.

There are also Bigpond movies to stream the latest releases.

We also liked the area of the smart TVs dashboard called 3D World which was a place where we could watch plenty of 3D content.

At the moment it is mainly filled with short 3D documentaries but LG sees this as an area where viewers will be able to access more premium 3D content like movies and sports.

Users can easily share content wirelessly from other devices like their smartphones and tablets to show off your pictures and video on the LG’s excellent 55-inch screen.

Using DLNA (digital living network alliance), viewers can also tap into content stored on other devices on your network like desktop and laptop computers.

It’s also possible to connect an external hard drive and USB and view their contents.

Speaking of external hard drives, users can also use one to connect to the LG 55LM7600 and set it up as a PVR (personal video recorder).

Intel-powered laptops with Wi-Di (wireless display) can replicate their computer’s screen on the LG’s screen wirelessly. This is a handy feature to share content or to give a business presentation.

Users can also mirror the TV’s screen on an iPhone or iPad or an Android smartphone or tablet.

It’s a shame we couldn’t watch a different source or channel to avoid any arguments on what we wanted to watch on the TV.

Dual play is an excellent feature for gamers who want to play against each other on the same screen.

Rather than splitting the TV’s screen to two smaller sections to enable multiplayer on one screen, the LG 55LM7600 provides each player with their own full screen view.

It does this was similar glasses which are used for 3D. One pair has two left lenses to see one image and the other pair has two right lenses to watch a completely different image at the same time on the same screen.

Another star feature of the LG 55LM7600 is the Magic Motion remote. The small device allows users to easily pilot a pointer on screen that is only visible when the remote is picked up.

Having the onscreen pointer allows viewers to easily navigate the smart dashboard, the web browser, their apps and, of course, the TV itself.

It can also be used for gesture controls. When you press and hold the middle select button users can make one of two gestures to return to a previous program or a recent channel.

When it is not being used and is placed back on the coffee table or desk, the pointer disappears off the screen after a few seconds.

There’s also an LG Magic app for the iPhone which can turn it into a remote to control the volume, navigate the channels, access the smart dashboard and even access a function that turns the iPhone’s screen into a touchpad to control the TV’s onscreen pointer.

LG has done well to lift its game from last year’s models and offer a vastly improved product in all areas for 2012.