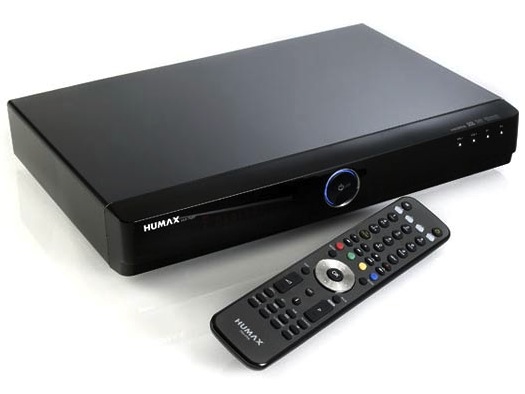 If you don’t want to miss any of your favourite programs then the Humax HDR-7500T comes in handy with twin tuners and access to catch up TV apps.

It’s well priced and easy to use and also allows users to access other content on their network.

This full high definition model is available with either a 500GB or 1TB internal hard drive.

The Humax HDR-7500T is a piano black device with a large on/off button dominating the centre of the front of the unit.

It’s about the same size as a DVD player and has an easy-to-read digital display to the left of the on/off button to see the channel, volume or any other action going on aboard product.

There are two USB ports, an Ethernet port, HDMI port and RCA connections.

The remote control works not only to control the Humax device but your other entertainment devices as well.

Even if you have a busy recording schedule the Humax HDR-7500T can help you with twin tuners which means users can record two channels at once while watching a recorded program.

If you want to watch a live program then you can only record one other channel. And with either 500GB or 1GB of storage there is plenty of room to store your recordings.

The built-in EPG (electronic program guide) makes it easy to see what’s on up to eight days ahead and set your recordings.

Customers who purchase the Humax device will also get a free three-month subscription to IceTV – a premium EPG service which allows for series recording, searching and recording by keyword as well as offering remote access to set and record from anywhere.

And the HDR-7500T is not just about watching and recording live TV.

Being a connected device, either with an Ethernet cable or with an optional wi-fi adaptor, it’s possible to access content on other devices on your network like computers and network drives.

There are also two USB ports to easily play back media from small USB drives or external hard drives.

If you have a digital camcorder you can also copy your movies to the Humax’s hard disc drive to view on your TV screen.

Setting up the Humax HDR-7500T is fairly simple and accessing live TV or your recordings was straightforward.

We would have liked the remote control to give more prominence to the playback controls.

For an activity that will be so popular with a product like this we were surprised to see the play, pause, stop, record and forward and rewind keys were among the smallest buttons on the remote.

If they were larger it would make playback at lot easier.

When we were setting up the Humax HDR-7500T we had to perform a software update, which is one of the selections in the Easy TV Portal.

Our review unit acted a little erratically after this update – it turned itself off, changed channels by itself and often displayed the volume level on the screen.

Apart from this issue – which we assume is a problem with our review device – the HDR 7500T performed well.

The Humax HDR-7500T is a no-nonsense device that focuses on what it does best – recording and playing back TV shows.

Being able to access other content from within your network and from the internet is another welcome layer.