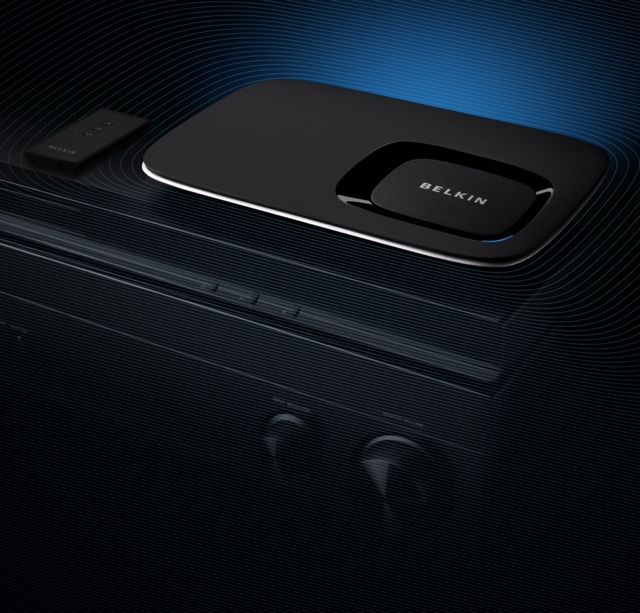 Connecting your equipment to your TV means a mess of cables behind your panel but a device from Belkin called ScreenCast AV 4 can put an end to that for good.

The ScreenCast AV 4 gives users the ability to move all of your devices – Blu-ray Disc player, set top box, gaming console – away from the TV and locate them in a more convenient position.

The Belkin ScreenCast AV 4 uses a technology called WHDI – wireless high definition interface – to stream the signal from your equipment to the screen without loss of audio or video quality.

The advantage of this is being able to choose where in your home you’d prefer to locate your equipment.

Usually customers have no choice but to crowd their entertainment unit with equipment and cables.

And what about those people who want to mount their TVs on the wall?

Connecting all your gear to the TV in this situation involves creating holes in your walls and feeding cables through. Not the best solution if you’re renting.

But with the Belkin ScreenCast AV 4 these problems disappear.

Up to four devices can be relocated up to 30m line of sight or about 10m through walls and glass.

ScreenCast AV 4 is comprised of two main features – the transmitter and the receiver.

Let’s start with the transmitter which about the size of a book with all the ports on the rear panel.

This is the device we used to connect up to four devices using HDMI cables.

The transmitter needs to be positioned near a power point not only for itself but for the other four devices you’re connecting to it.

Another thing we needed to do was connect the four IR (infra-red) emitters. These are four cables that branch from a single connection which is plugged into the back of the transitter beside the HDMI inputs.

Quick tip – use a small torch and shine it on the front panel of each device to make it easier to find the IR receiver on each one.

We need to do this because, even after the Belkin system is completely set up and linked to the TV, we want to be able to use each of the remote controls of the devices as we normally would.

Now when you point the remote of the Blu-ray Disc player, for example, at the TV it will be relayed from the Belkin receiver back to the transmitter and sent to the IR emitter on the corresponding device.

When it’s powered up the device sends the signal of the source selected wirelessly to the TV which is connected by a single HDMI cable to the other half of the Belkin ScreenCast AV 4 – the receiver.

The ScreenCast AV 4’s receiver is even smaller than the receiver – it’s slightly wider than a CD case.

It also needs to be connected to a power point and also linked to the television using a single HDMI cable.

The receiver can be positioned beside the TV on the entertainment unit.

If the TV is mounted, the receiver can also be mounted beside it. Now instead of a tangle of cables there is only one cable.

Once everything was powered on, we selected the input on the TV that the receiver is plugged into to see all the sources which are available to stream from the transmitter.

We were able to name each of these sources to make it easier to choose what you want to watch rather than the hit or miss method of searching through the source input numbers.

A single press of the pair button on both the transmitter and the receiver and it took about a minute for the devices to find each other and link together.

For our review we positioned our equipment in the back corner of the room in a small equipment rack about eight metres away from the TV.

OK, the fairly easy set up is complete – so how does it perform? In short, remarkably well.

We’ve taken all the clutter away from the TV area and positioned it in a more discreet location. It’s even possible to set up the Belkin ScreenCast AV 4 and your equipment out of sight in a cupboard.

Another advantage for those who opt to wall mount is not having to punch holes in the wall.

And those who have set themselves up with a home theatre with a ceiling-mounted projector can take advantage of the Belkin ScreenCast AV 4 instead of snaking a long HDMI cable above the ceiling and down the wall to the equipment at the opposite end of the room.

Switching between sources is easy with the small remote which comes with the Belkin ScreenCast AV 4.

Our only criticism with the system is that it takes about 10 seconds to switch between sources – hardly an eternity but noticeable.

But that is a small price to pay for the convenience of being able to locate your equipment where you want instead of being chained to the TV.

Being wireless one of the first questions people will ask is how will the quality of the audio and video be affected.

The best news of all is it won’t.

We didn’t see a single hiccup even when watching 3D Blu-ray movies and heard no degradation of the audio either.

Even playing our games online where speed is key, the Belkin ScreenCast AV 4 provided the same level of performance as a product that was directly connected to the TV.

ScreenCast AV 4 supports all video resolutions right up to full high definition 1080p at 24 frames per second and up to 5.1 channel surround sound.

The Belkin ScreenCast AV 4 is the ideal device to declutter the area around your TV and relocate the equipment to suit your needs or your taste.

And the best thing about it is the fact there is no loss of quality to gain this convenience.

Four and half stars