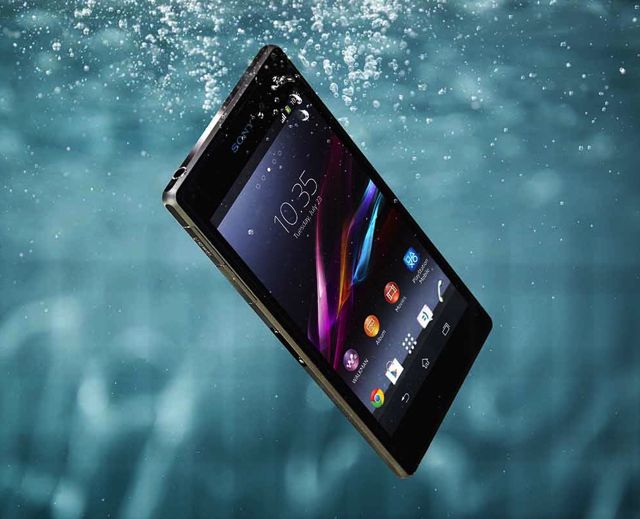 The Xperia Z smartphone was always going to be a hard act for Sony to follow but the successor – the Z1 – has taken the device to new heights.

Sony’s Xperia Z1 looks almost identical to the Xperia Z from the outside but there are still a number of enhancements under the hood.

Without a doubt the standout feature for the Z1 is the camera which now has a huge 20.7-megapixel resolution – the highest found on an Android device.

With many people now relying on their smartphone to be their camera, the Xperia Z1 delivers quality like never before.

Sharing photos on social media has become one of our favourite pastimes and now the Z1 can ensure the pictures you share are excellent quality.

The device has a real quality feel to it – solid and precise – and has a nice weight (170g) when you hold it in your hand.

It has the same rounded edges and thin design as the Xperia Z with sealed charging ports and microSD card and SIM card slots.

That seal also comes in to play to give the Z1 the same waterproof and dust resistant construction so you can take it to the beach, to the pool and even underwater to a depth of 1.5m.

And while that durability is impressive, the Z1’s camera can also be used underwater as well to capture stills and videos.

Sony says it can be used in freshwater for up 30 minutes but salt water should be avoided. So it’s OK to be used the shallows at the beach but you just can’t dunk it.

On the back of the device is that 20.7-megapixel camera with flash and there’s also a quick access button on the right side to activate the camera.

That same button can also activate the shutter in camera mode – handy for when you’re taking snaps underwater.

Along the top edge is a 3.5mm headphone jack.

It’s hard to talk about anything else but the camera on board the Xperia Z1 because it is such a standout feature of the product.

There is a large 20.7-megapixel Exmor RS sensor that is the main reason why images captured with the Z1 are so good.

It has high sensitivity and combines with the 27mm wide angle lens to capture more light and detail for truly stunning images even in low light conditions.

Also on board is a technology called Bionz – a mobile image processing engine that helps set auto exposure, white balance and does the heavy lifting when it comes to producing bright and colourful blur-free images.

The results speak for themselves as our many examples show and can easily challenge, if not exceed, the quality of images captured with entry and mid level digital cameras.

Whether it’s macro shots or sweeping landscape and scenery shots, the Xperia Z1 has got you covered.

The Superior Auto mode is excellent and does all the calculations and adjustments for you to come up with the best result.

But there are also manual settings and panorama mode along with Time Shift Burst to ensure the best image whether it was taken a second before or after you actually hit the capture key.

There are also a number of fun effects and filters to give your images a new look or texture.

Another favourite is AR (augmented reality) Effect which can add virtual object to your images ranging from a dinosaur and butterfly to a helmet, disco wig and pirate hat.

And it’s not just good for still images – the Z1 can also capture full high definition video with SteadyShot to smooth out movements and rough panning.

Social Live is another cool camera feature that allows users to broadcast their moment in a live stream to Facebook and even see their comments in real time.

The Xperia Z1’s screen is impressive and includes the same Triliminos technology Sony uses on its smart TVs so it’s sharp, clear and bright.

It is great for viewing your images and video, using apps and surfing the web.

The Sony Xperia Z1 4G smartphone is running Android 4.2 Jelly Bean and is powered by quad core Snapdragon 800 processor which is 75 per cent faster than the previous S4 chip.

This allows easier multi-tasking so you can have a few apps running simultaneously as well as opening apps faster, streaming videos smoothly and loading web pages even quicker.

Graphics performance has also been updated to the Adreno 330 processor for increased performance while playing games, viewing images and videos in all of their glory – and all with lower power consumption to save the battery.

Speaking of the battery, the device can easily run for a whole day before you need to reach for the charger.

That’s thanks to the handy Stamina Mode which intelligently saves power by turning off functions you’re not using.

For example, wi-fi and data are disabled when the phone is locked or on standby while still allowing calls and texts to come through.

Users can even set the notifications you’d like to receive in Stamina Mode to make the battery last even longer.

Sony is definitely back as a serious player in the smartphone game.

The Xperia Z1 is a noticeably improved device from its well-received predecessor the Xperia Z.

This time out the Z1 has set a new benchmark in terms of the camera quality users can find on smartphone.

It is easily the best camera we’ve used on a mobile device.

And the good news is the rest of the device is top shelf as well from the screen and performance to battery life and content that can be viewed and created with the device.

The Sony Xperia Z1 is a well-rounded smartphone which will tick nearly every box for a wide range of users.

Heyrex is an activity and health tracker for your dog