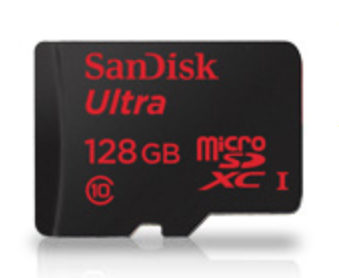 SanDisk, a global leader in flash storage, has released the world’s first microSD card with 128GB capacity in a form factor that’s smaller than a fingernail.

The technology of flash has seen massive improvement as this product demonstrates.

Innovation has seen a 1000 x microSD card capacity increase in less than a decade.

The 128GB microSD card – the highest storage capacity in a removable form form factor – can be used with a variety of devices especially Android smartphones and tablets.

And not only can the card store more data, it can also offer high performance for high read/write speeds to record and playback high resolution images and full HD video.

The microSD format was introduced in 2004 with a 128MB capacity. The ability make that capacity 1000 times larger is the result of a proprietary technique by SanDisk.

This technique allows 16 memory die to be stacked on top of each other and each shaved to be thinner than a hair.

SanDisk’s 128GB Ultra MicroSDXC card is available in stores now and is priced at $199.