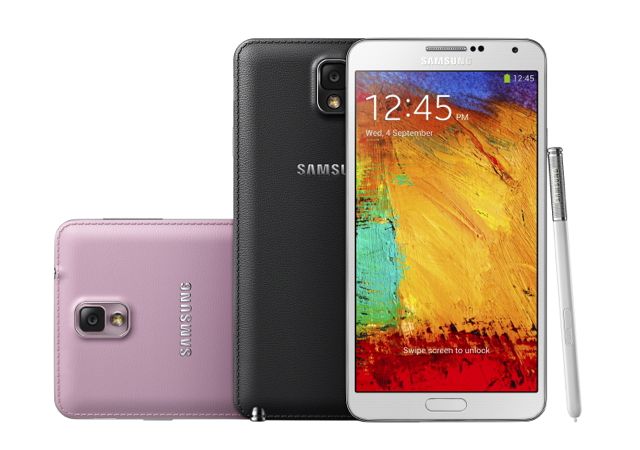 Samsung has introduced the Galaxy Note 3, which is part smartphone and part tablet, with a larger and improved screen along with an even sleeker design.

Unveiled in a special media event on the eve of the IFA consumer technology tradeshow in Berlin, the device – a follow-up to the hugely popular Galaxy Note II – now has a 5.7-inch Super AMOLED display that has a full high definition resolution of 1920 x 1080.

Also onboard is a higher resolution 13 megapixel camera with LED flash and a blisteringly fast 2.3Ghz quad core processor and 3GB of RAM – the industry’s largest.

Despite having a larger screen the device itself is still the same width as the Note II but it is slimmer and lighter at a slender 8.3mm and a lightweight 168g and also has a textured leather-like back panel complete with stitching.

Tech Guide had a hands-on look at the device and found the build quality to be quite high and the textured leather back cover also adding to that feel of quality.

The S Pen, the device used to write and draw directly on the screen, has also been updated and puts a lot more capabilities in your hands with features that are relevant and useful and which can be used everyday.

These include Action Memo that can take a handwritten note and either convert it to formatted content or executes a function like making a call or looking up an address on a map.

Scrapbook lets users gather content from several sources in one place while Screen Write can capture a full screen image and allow users to write comments or additional information on the captured image.

S Finder makes it possible to do a device-wide search for content while Pen Window lets the user create a new window of any size to run other applications for a true multitasking experience.

Another feature called Multi Vision can combine two or more Note 3 devices next to each other to watch videos on a larger scale.

Samsung’s Galaxy Gear smartwatch will also link seamlessly with the new Galaxy Note 3 and form an ideal companion for the truly connected user.

The Samsung Galaxy Note 3 will be available in 32GB or 64GB versions, in three colours – black, white and pink – and will launch worldwide on September 25.

Oprus, Vodafone and Virgin Mobile have all confirmed they will be offering the Samsung Galaxy Note 3 to their customers.

It is just 7.9mm thick and has the same textured back panel as the Galaxy Note 3.