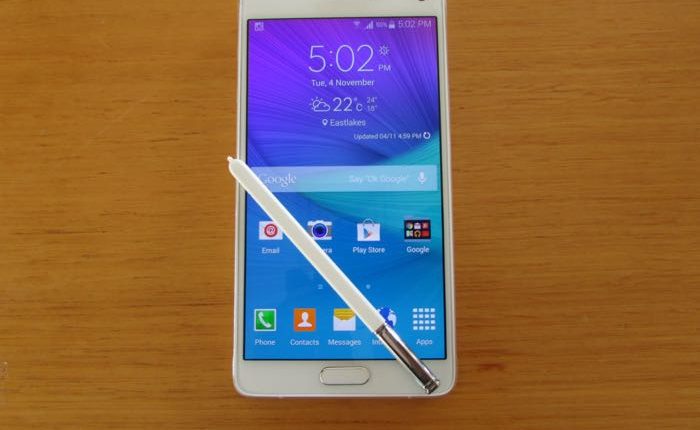 The new Samsung Galaxy Note 4 is the latest heavyweight to enter then growing “phablet” market which now has fierce rival Apple in the opposite corner.

But the good news for Samsung is the Galaxy Note 4 is the culmination of four years of work in this larger screen space.

And the result is a better all-round product that can stand toe-to-toe with the fancied iPhone 6 Plus.

Samsung has begun dabbling in this larger screen space while Apple’s hero iPhone had a 3.5-inch screen and that courage has paid off.

And the trademark S Pen is also included with the Note 4 – it wouldn’t be called the Note without it – and it can now be used in several different ways.

One complaint about Samsung devices of the past was that they lacked build quality and felt very plastic.

That’s not the case this time out.

The metal frame that rings the device has a polished edge that’s angled just right to offer a glint every time you move it.

On the back is a leather-like textured panel that adds to the luxurious feel of the product.

It has a nice solid feel in your hands despite its delicate proportions of 8.5mm thickness.

And despite having a 5.7-inch display, it doesn’t feel as big as previous models.

The reaction from others when we showed them the Note 4 was more about how nice it looked rather than how big it is.

It’s another indication that larger screen smartphones have become the new normal.

Once again Samsung has delivered with a stunning 5.7-inch Quad HD Super AMOLED display with a resolution of 2560 x 1440.

The colour and clarity is excellent so your content looks stunning.

It’s not hard to look at a screen of this quality all day long whether it’s browsing the web, reading emails, using apps or reading e-books.

Even in bright sunlight it was still quite easy to read.

The Galaxy Note 4 has a plethora of features that will suit road warriors and multi-taskers alike.

One thing that has held back users getting more work done on their smartphones is size of the screen and ability to run several apps at the same time like you would on a computer.

The Note 4 delivers on both fronts here with a screen big enough to get some work done and the ability to run and view apps at the same time.

Split Window lets you run two apps on either half of the screen while Pop Up Windows give you the option of having a secondary app floating in its own window.

The S Pen is also a powerful productivity tool and its most obvious use – writing on the screen – has also been enhanced.

It now has increased sensitivity so the thickness of the strokes on the screen is determined by the pressure you apply, just like a real pen.

S Pen can also be used like a mouse for more precise text selection to make it easier to cut, copy and paste from one app or document to another.

Photo Note is another feature that, in theory, allows you to photograph text to make it an editable document.

We say, in theory, because we couldn’t get it to work – even with just a couple of words on the screen. In the end it was too hard to even bother.

Like the Galaxy S5, the Note 4 also has a fingerprint reader under the home button.  Unfortunately, it is just as clumsy as the one on the Galaxy S5 and only works if your finger is passed exactly down the middle of the home key.

To unlock it we had to hold the device in one hand and run the finger on our other hand precisely over the home button to unlock it. We ended up turning this off and going back to a four-digit passcode.

The Samsung Galaxy Note 4 has a quad-core 2.7Ghz processor under the hood and it does an excellent job in powering this large device and screen for smooth and fast operation.

It also has a generous 3GB RAM and 32GB of internal memory with expandable memory through a microSD card slot.

As you’d expect the device is really fast and you can move around the menus and apps quite quickly.

The onboard 16-megapixel camera captures excellent images. It has OIS (optical image stabilisation) for blur-free images.

The sensor also soaks up 60 per cent more light so even in low-light situations your images are going to look a lot better and the front-facing camera has a resolution of 3.7-megapixels.

Connectivity wise the Galaxy Note 4 has all the latest connections including 4G that’s compatible with Telstra’s new 4GX 700Mhz network along with the faster 802.11ac wi-fi and Bluetooth 4.1.

The 3220mAh battery has a lot of work to do to power that beautiful 5.7-inch screen and the processor and easily lasted just over a day which we thought could have been a little better when you consider just how big the battery is.

But the battery’s saving grace is the Fast Charging feature which can get you from zero to 50 per cent capacity in just 30 minutes. This usually takes just under an hour.

And if you really get desperate and need to stretch your battery power out even longer there always the Ultra Power Saving Mode.

The Samsung Galaxy Note 4 has taken the large screen smartphone to the next level with features to suit the added size of the device.

The S Pen continues to stand this “phablet” out from the crowd as does its stunning screen and excellent performance.

Samsung has priced the Note 4 for the top end of the market at $949 so it might be out of the reach for some users. But premium products have premium prices.

The Samsung Galaxy Note 4 is an excellent device for the user who wants to get even more out of their smartphone.