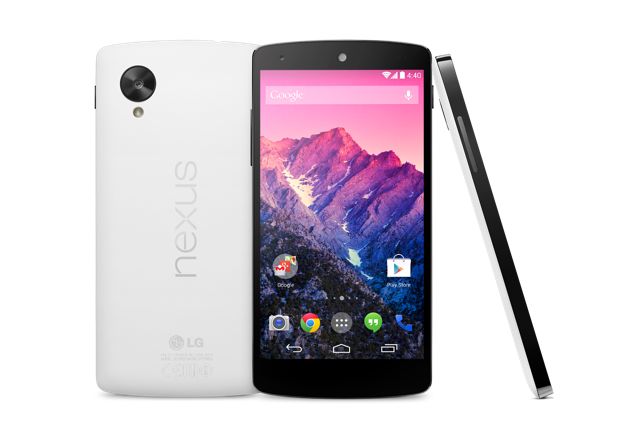 Google’s Nexus smartphone has been going from strength to strength with each version and the new Nexus 5 has continued that tradition with style.

The device has a 5-inch display and brings together the latest features including the brand new Android 4.4 KitKat operating system.

Despite now owning Motorola, Google stuck with LG to manufacture the Nexus 5 after the success of the Nexus 4 and have come up with a well-built quality device.

The design is simple and clean with no physical buttons on the front of the device.

It has a black featureless front face with no logos or anything else that is going to distract you from the screen.

On the left edge is the volume up/down key and on the right the on/off/lock key and the SIM card tray which needs to be opened with a special tool like the iPhone.

Along the top is the 3.5mm headphone jack and the bottom edge had the microUSB charge/sync port.

The Nexus 5 is comfortable to hold with its slightly curved rear panel fitting nicely in your hand.

And despite having a 5-inch screen, the Nexus 5 is not an oversized handset. It’s only slightly larger than the iPhone 5S.

The standout feature of the Nexus 5 would have to be Google’s latest 4.4 operating system KitKat which makes its very first appearance on this device.

And with KitKat comes a host of new features including the ability to print on the go, easier access to your documents on Google Drive and faster multitasking thanks to memory optimisation.

Your contact list is also prioritised based on the people you call most and a smarter caller ID that can recognise matches with incoming calls to local businesses listed on Google Maps.

With activity trackers all the rage at the moment, the Nexus 5 can also act as a pedometer and count your steps in a way that is not going to impact your battery performance.

Of course Google’s best products – YouTube, Google Now, the Chrome browser, Gmail, Maps, Drive and Hangouts – are preloaded and work from the cloud across all of your devices and computers.

Google is synonymous with search and the Nexus 5 makes searching easier than ever thanks to voice search.

All you have to do is say “OK Google” to activate and ask a question.

This feature can also be used to send a text message or play a song.

Also on board is the very latest wi-fi 802.11ac standard which can be up to three times faster than the previous 802.11n standard.

And if course you’re connected at 4G/LTE speeds when you’re out and about on the mobile networks.

On the camera side, the device has added HDR+ (high dynamic range) to take better pictures in all kinds of environments where there is a difference between bight and dark scenes.

The Nexus 5 produces decent images in low light situations while shots taken in brighter environments looked a little washed out.

But the quality is still there and images and videos are perfect for sharing on social media.

One feature you won’t find on board the Nexus 5 is a microSD card slot so you can’t expand the memory beyond the 16GB or 32GB that’s onboard the two models.

Another attraction for Android users is the uncluttered user interface.

Most other Android smartphones comes with an added layer of apps and user interface on top of whatever version of Android lies beneath.

The Nexus 5 user interface is pure Android and refreshingly sleek.

The Nexus 5 isn’t just about looks and features – it also has it where it counts under the hood.

The smartphone is powered by a quad core Qualcomm Snapdragon 800 2.26Ghz processor and 2GB RAM that offers excellent performance.

Users will notice the Nexus 5 is quite fast when opening apps and accessing data as well as speedy access to features like the camera or the phone.

On the battery side the device is pretty similar to the sort of performance you’d get from the popular smartphones in the market.

For our testing we easily got through an entire day even with heavy use accessing emails, browsing the web and social media.

The Nexus 5 is an impressive device that offers the latest features and Android operating system.

The device is sure to win a legion of fans because it can feel at home in the hands of a first time smartphone user or a high-end user.