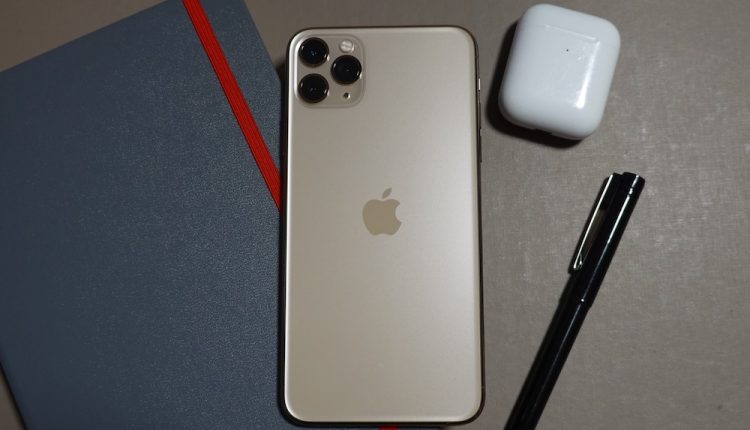 The iPhone 11 Pro is one of Apple’s greatest achievements. The product has evolved into a real powerhouse with a camera system that easily holds its own with other flagship smartphones.

It might not look it, but there have been quite a few changes to the iPhone 11 Pro which all add up to a decent improvement over last year’s excellent iPhone XS.

Customers may take one look at the new iPhone 11 Pro and not see much difference at all apart from an extra camera and a new lens arrangement.

But that would be selling the device short.

Yes, most of the improvements are under the hood.

Yes, the shape and design are identical to last year’s iPhone.

From the front the iPhone 11 Pro looks exactly the same as the iPhone XS – same size screen and the same notch. 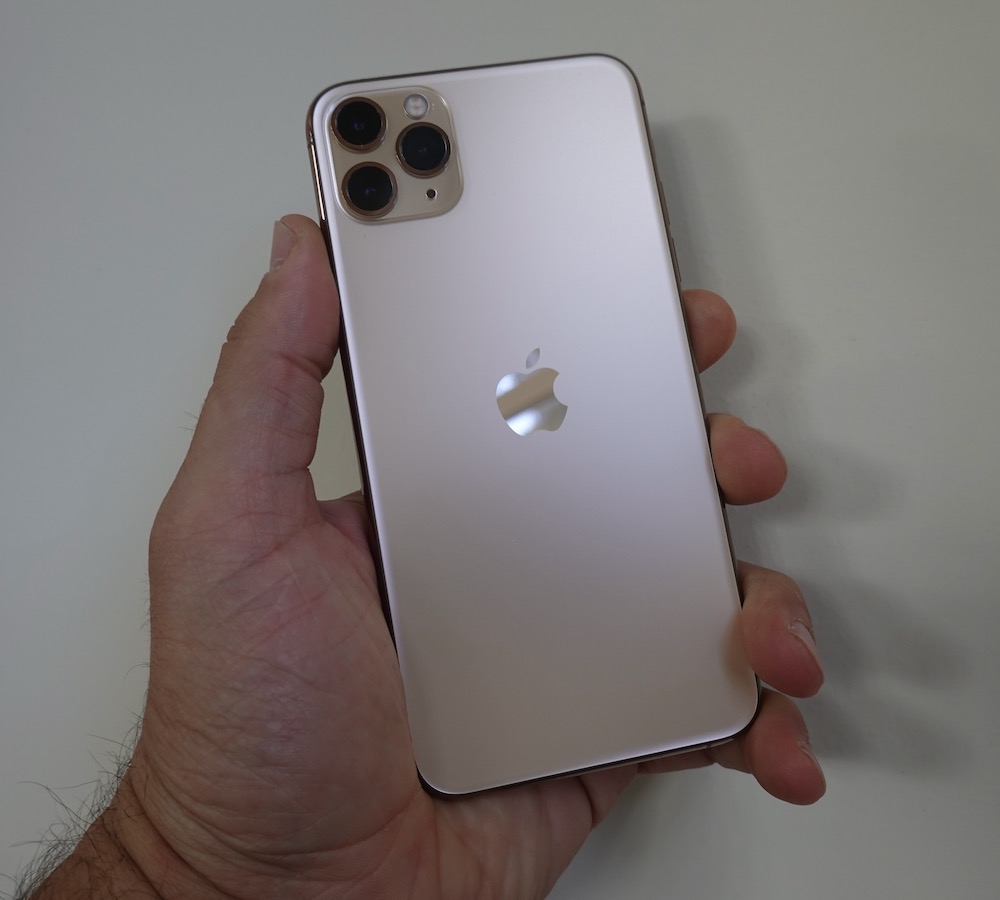 Turn it over and you can see some differences. Obviously the camera system stands out as does the new matte rear panel that’s milled from a single sheet of glass.

We expected nothing less. Couldn’t imagine a join or a seam in the middle of that back panel.

Interestingly, the buttons on either side of the iPhone 11 Pro are slightly lower than they were on the iPhone XS – probably to make way for the larger camera system. 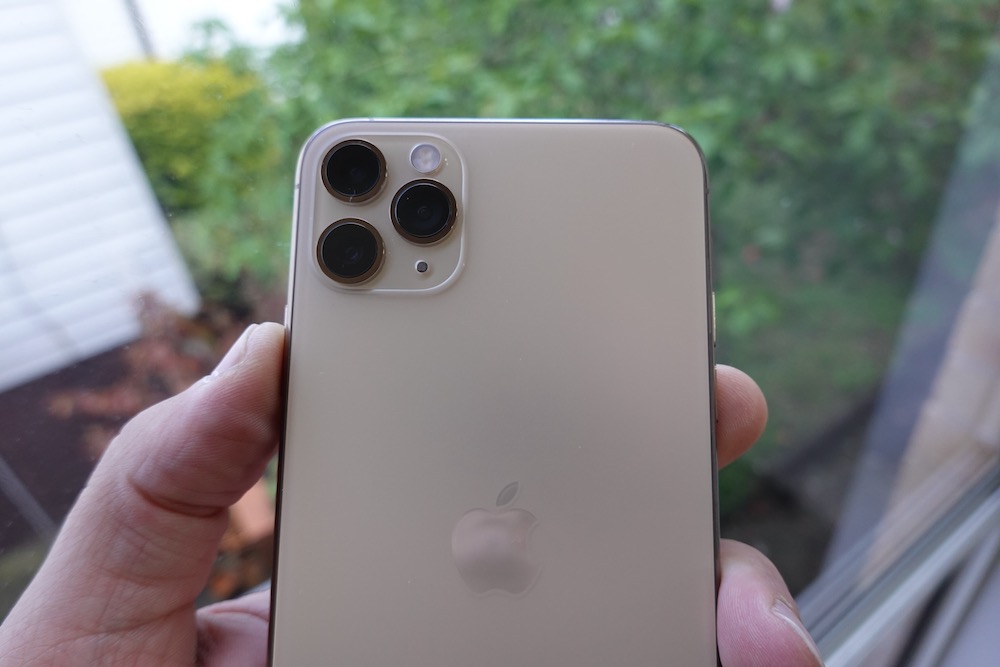 Overall, the iPhone 11 Pro feels great in hand and the matte finish is a nice change.

Even though the screen size of the iPhone 11 Pro hasn’t changed, the Super Retina XDR display has improved brightness – up to 800 nits for easier viewing outdoors and up to 1200 nits when watching HDR10 and Dolby vision movies and viewing HDR photos.

It’s a shame Apple didn’t expand the display further to the edges. 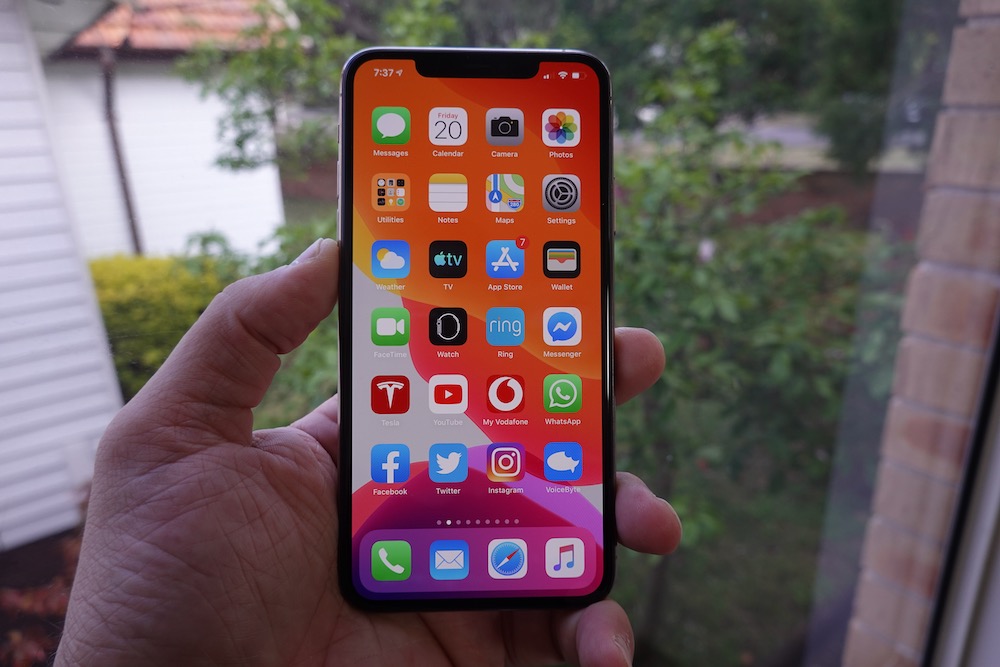 The bezels (the black space around the screen) are quite wide when compared to other flagship devices like the Samsung Galaxy S10 and Note 10 and the just announced Huawei Mate 30 Pro.

We suspect, Apple is keeping its powder dry for next year’s iPhone which will have an edge to edge screen, a fresh new design and 5G connectivity. 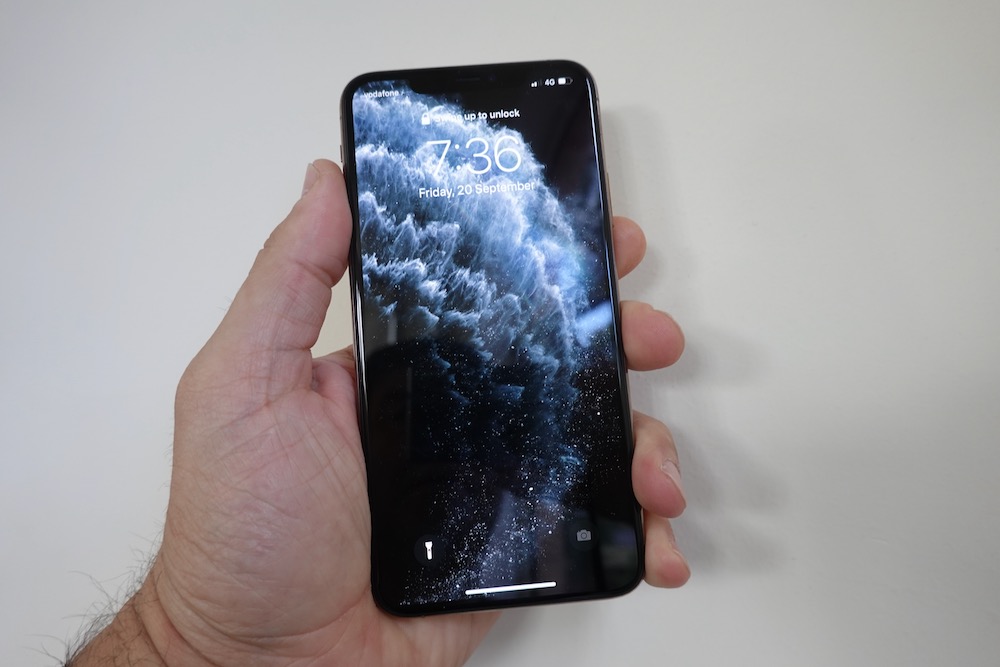 But the Retina Display XDR still looks amazing with images and videos and apps really popping.

The iPhone 11 Pro is powered by Apple’s very own A13 bionic chip which is up to 20 per cent faster and uses 30 per cent less power than the A12 processor.

On the graphics side, the iPhone 11 Pro’s four-core Apple-designed GPU is up to 20 per cent faster with up to 40 per cent more power efficiency than last year’s chip.

It is this remarkable power which the iPhone 11 Pro relies on for its machine learning that is put to use across the device.

You can notice slight improvements in speed when opening apps and the lovely smoothness of playing games and watching videos.

And as far as efficiency goes, that is reflected in the improved battery life – but more about that later.

The new iPhone 11 Pro has spatial audio for an improved experience.

The device now supports Dolby Atmos and does a great job placing audio around you while watching a video.

While this was impressive, we think it’s not very often will get a chance to watch our videos out loud through the iPhone’s speakers.

We understand the Dolby Atmos effect will carry across when listening to your content on a pair of  Dolby Atmos capable headphones.

The TrueDepth camera system on the front of the device looks after the Face ID which is now 30 per cent faster on the iPhone 11 Pro.

Apple says Face ID has a wider field of view which means it can be unlocked from further away when you look at the device.

There was some people criticising Apple for not including an in-screen fingerprint reader with the iPhone 11 Pro.

But when you’re Face ID is this good, why bother with fingerprints? 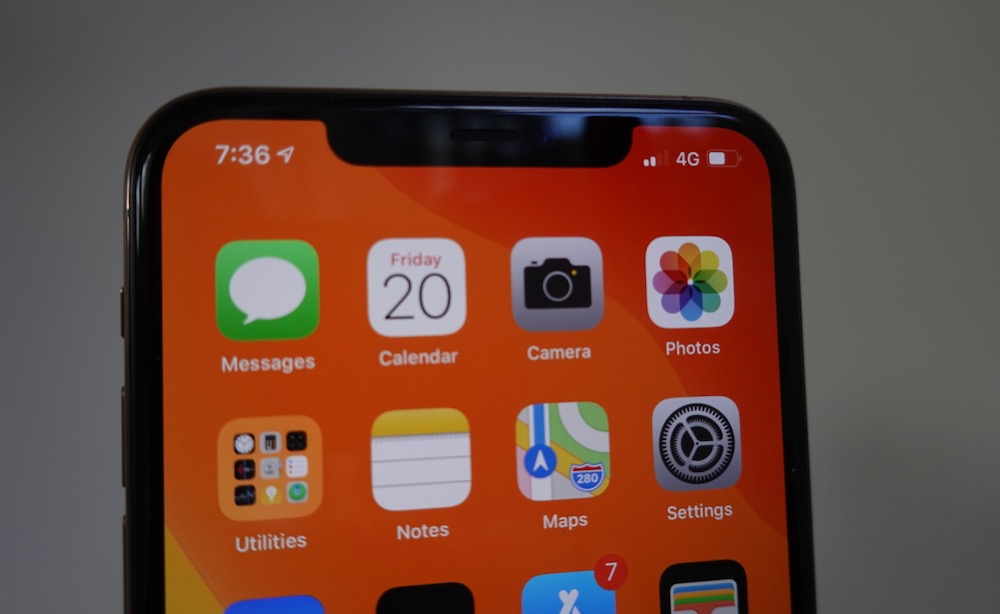 Apple’s Face ID is miles ahead of the competition and has proven to be quite secure.

Frankly, other smart phone facial recognition systems are average at best and can even be fooled with photographs.

The iPhone 11 Pro is a 4G device which supports the faster Gigabit-class LTE so you’ll see faster performance on the networks.

Many were hoping Apple would offer 5G this year but given the scarcity of 5G coverage in Australia this isn’t a deal-breaker for us.

If next year’s iPhone doesn’t have it, well that’s another story. But for the moment 4G will do just fine.

This is, without a doubt, the feature that has had the biggest improvement with the iPhone 11 Pro.

There are now three lenses on the camera – an ultra-wide, wide and telephoto – that combine to form one of the most formidable photography systems on a smartphone.

Other brands have had triple camera systems for more than a year.

But Apple hasn’t just included an extra lens to match the competition and left it at that.

It has also redesigned the camera interface to make it more intuitive and easier to take advantage of the incredible image quality at your fingertips.

As usual, Apple has added a touch of surprise and delight in the improved camera app.

A favourite feature of ours is seeing the immersive new interface which can show you what’s possible beyond the frame lines.

For example, when you’re in the 1x view, instead of seeing black bars either side of the frame, you can see a grey area showing the extra content you can achieve with the ultrawide lens.

Then, if you aim the camera at something close to you, that grey area will gradually return to black again.

Aim it out to the wider area again and you’ll see those black bars fade to grey and show that extra part of the image you can capture.

The ultra-wide lens can fit in four times more scene and comes in handy when you can’t move back from your subject but still want to capture more.

There are shortcuts to jump out to the other lenses and then a dial to fine tune the zoom right down to the millimetre equivalent.

The wide camera can focus up to three times faster even in low light while the telephoto camera with a wider f/2.0 aperture can capture up to 40 per cent more light.

There is also an optical 2X zoom that goes up to 4X optical zoom when combined with the ultra-wide camera.

Apple’s iPhone cameras have always been of the highest quality and produce superb images. 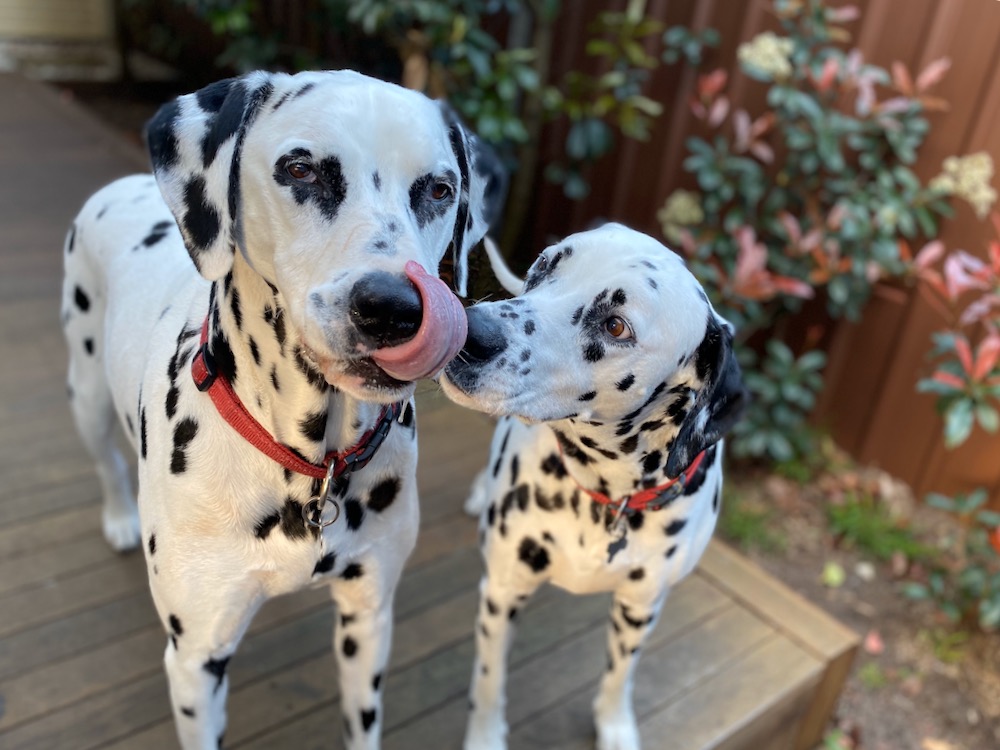 Well now that is even better.

The iPhone’s sensors do a great job interpreting the light that comes in through the lenses and presents natural and accurate colours that don’t look artificially brightened and exaggerated like other phones.

Portrait photography has also gone to the next level.

Another remarkable improvement is Night Mode which uses the 100 per cent Focus Pixels in the on-board intelligence software to intelligently add light in the near total darkness.

The iPhone can automatically detect low light conditions that would require Night Mode and it captures multiple images and stitches them together to create one brighter image.

When you hit the shutter it takes a few seconds for it to complete its multiple passes with the image before coming up with a stunning result.

Even the selfie camera has been improved and now gives you the option of an even wider shot to fit more people and more scenery.

The device will automatically switch to the wider mode when you turn the iPhone sideways because it assumes you’re trying to fit more in the image.

On the video side, there is also much to celebrate with the iPhone 11 Pro capable of capturing 4K video at up to 60 frames per second.

The new QuickTake feature allows users to go from photo mode to shooting video by simply holding the shutter button.

And to lock the recording you simply slide the shutter button to the right to keep shooting.

Here’s what a Slofie looks like on the new iPhone 11 as editor @stephenfenech discovered. Is this going to become a thing?? #slofie #dalmatian #apple #iphone11 #iphone11pro #selfie #puppy #dog

Burst mode is now possible by sliding the shutter button to the left.

Apple is also hoping a new type of shot will catch on – the slow motion selfie, otherwise known as a “slofie”.

We tried this with one of our dalmatians – and the result was amusing.

Apple has caught up to the competition in terms of the number of lenses on the iPhone but it has easily equalled, if not exceeded, the quality of the images and videos the device can now produce.

Another impressive improvement with the iPhone 11 Pro is with the battery which Apple says can last up to five hours more than last year’s iPhone.

We can absolutely confirm this is true.

In fact, this is the most impressive battery performance we’ve ever seen on an iPhone.

We’re talking about a battery life of up to two days.

We started our day at 9am with a 100 per cent battery and by late in the evening it had only got down to 65 per cent. 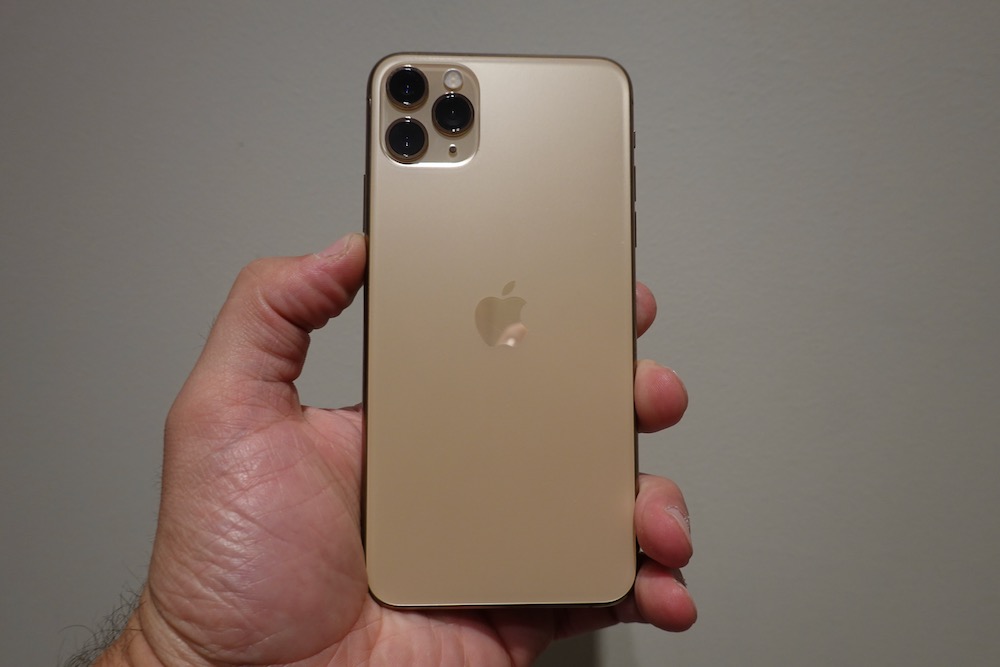 For the first time, the iPhone 11 Pro has fast charging on board and comes with an 18W charger and a USB-C to Lightning cable.

When the iPhone battery is really low it’s possible to get back up to 50 per cent in 30 minutes.

If you’re charging from a higher battery level – let’s say 30 per cent – a half hour charge will only get you an extra 35 per cent.

And of course the iPhone 11 Pro can also be charged wirelessly.

The iPhone 11 Pro is one of Apple’s greatest achievements. The product has evolved into a real powerhouse with a camera system that easily holds its own with other flagship smartphones.