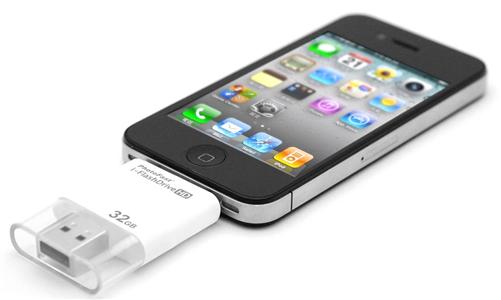 One of the main complaints with Apple’s iPad is that it doesn’t have a USB port to easily view files but a new product called the iFlashdrive solves that problem.

The device allows users to save files like a regular USB drive and then view the files on the iPad, iPhone or iPod simply by plugging it in to the 30-pin dock connector.

The first time the iFlashdrive is plugged into your iOS device it automatically launches a notification to download the free iFlashdrive app.

At one end of the iFlashdrive is a 30-pin dock connector and at the other end is a traditional USB connection.

Where can I buy the iFlashDrive online?

If you’re interested in purchasing the iFlashDrive, visit BuyMac.com.au to order it online today.

With the USB connector it can be connected to any Mac or PC to allow users to simply drag and drop their files onto the device. There is no need to install any software drivers.

Files can include pictures, videos, audio, Excel, PowerPoint and Word files along with Keynote, Pages and Numbers files.

On the audio side the iFlashdrive can play MP3, CAF, ACC, AIF WAV AIFF and M4A.

Once all of your files have finished copying to the iFlashdrives memory you can now use the 30-pin dock connector to connect it to your iOS device.

As soon as the connection is made a prompt appears to open the iFlashdrive app so you can view a list of all of your files.

If the file is saved in the compatible formats above, they will open within seconds.

Users can still copy across files formats that are not on the list, like video AVI files for example, and still view them in the file list on your iPad, iPod and iPod.

When you select the file, a list of compatible apps where the file can be played is displayed. In the case of the AVI video file – one of the choices to play the file is VLC.

Users can organise the iFlashdrive by creating new folders and creating new text files, upload and download photo files and even use it as a voice recorder.

It’s also possible to delete files, move files and copy files within the iFlashdrive just as you would with a USB drive on a computer.

And it doesn’t stop there. The iFlashdrive can even back up your contacts and also link to your Dropbox account save and views files from the cloud on the go.

If you own an iPad, iPhone or an iPod, then the iFlashdrive allows you to directly share files on the run and view files stored on the device’s flash memory instead of from the iOS products built in memory.

Another big advantage is the fact that users don’t have to sacrifice precious space aboard their iOS device’s memory.

On the down side, the device’s 30-pin connector makes it hard to connect to an iPad or iPhone while it’s inside a case.

For our testing we had to take the iPad hard case off the device to securely connect the iFlashdrive.

The iFlashdrive also has the 30-pin dock connector so will only work with the iPhone 4S and earlier and the current range of iPads.

It will not work with the iPhone 5 because it has the newer and smaller Lightning dock connector.

The iFlashdrive is available from Mr Mobile at the end of October with customers able to pre-order now on 02 8338 8558 or at mrmobile.net.au.

The iFlashdrive is like a USB drive for your iPad and iPhone and is ideal for users who have always wanted to view and share files and documents on their device quickly and easily.