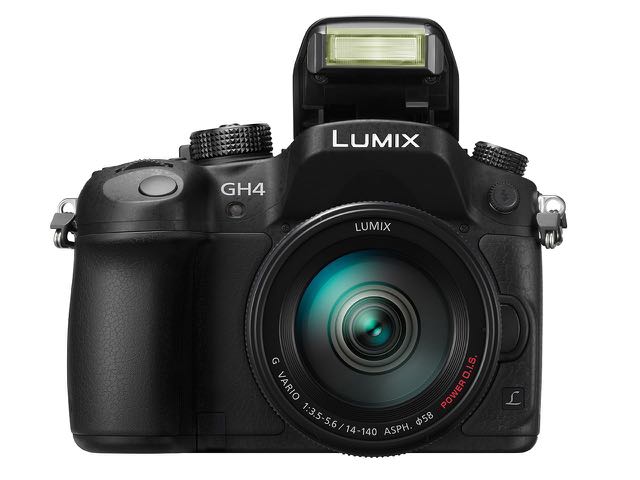 Occasionally, a camera comes on to the market that sets such a high benchmark for its class, there’s little you can do but fan the flames of praise.

So if you’ve already heard good things about Panasonic’s latest top-shelf DSLM, the DMC-GH4, well… get set to hear some more.

Heading the GH4’s feature list is the 4K capture capability.

Now, just to be clear in case you haven’t yet heard, 4K is the next wave of high definition video, offering four times the resolution of the1080p standard we’re all now well accustomed to.

I was in a store only recently to check out some 4K TVs and was genuinely astonished at the clarity of content created in 4K.

With the GH4, you have the ability to shoot video that will screen at its native resolution on these new TV sets.

If you don’t imagine yourself buying a new TV any time soon, the GH4’s 4K resolution is still of benefit.

Firstly, because if you’re editing video in the 1080p format, the extra pixel dimensions of 4K allow for amazing camera stability corrections; provided, of course, you have capable software and the know-how to use it.

Secondly, because if you do buy a new TV in the not-too-distant future, there’s a very good chance it will be 4K, so why not start shooting it now?

As an aside, you can tell Panasonic is serious with this camera by offering a base-mounted interface unit that extends the GH4’s production capability to professional workflow standards. Mind you, it’ll set you back about $2600.

What about the image quality of the GH4’s 4K capture?

Well, because of limitations on bandwidth and the simple fact that, at native resolution, 4K video dimensions (3840 x 2160 pixels) will expand beyond the edge of your computer display, there’s nothing I can do to effectively demonstrate to you over the web that it’s as great as I say it is.

So I’m going to ask you take Stephen Turner’s word for it. Steve’s a full-time video pro, a freelance broadcast cameraman and producer, and an occasional reviewer.

I loaned the GH4 to him for a day after he sent the word out on Facebook that he could no longer tolerate the video quality from his DSLR.

Here’s what he had to say:

“On the video side this little camera plays in the big league. Considering its micro four thirds sensor is smaller than an APS-C sensor and a lot smaller than a full frame sensor it kicks out some seriously good pictures.

“At 1920 it looks pretty much as you’d expect from a camera this size. Kick it up to 4K and it’s brilliant. Combined with a decent lens, it’s an art and indie filmmaker’s dream. With this combination it competes easily with the Canon 7D and even the 5D.

“There’s minimal loss in down converting to a usable size so it’s worth shooting high to start with. It can also record at up to 200mbps (in HD). Add in up to 96fps and slow motion will be fun. At this price it’s a serious contender as a Canon killer.”

The same day I loaned the GH4 to Steve, another friend messaged me with a smartphone snap of a GH4 rigged up in a cage for shooting a TVC, which is how the cool kids say television commercial. Game changer, much? You bet.

So there you have it. As for still images, I’d say this is the first DSLM I’ve handled that I would seriously consider for professional use.

Indeed, I took it on a professional shoot on the basis of its good performance in low-light with acceptably low noise at the ISO 1600 mark and tolerable noise up to ISO 6400.

It performed very well, capturing a few images that made their way to the client.

With more time spent shooting the GH4, I expect I could get the image quality on a par with my DSLR in most situations but, looking past the pixels for a moment, the great advantage of the GH4 in many situations involving candid shots of people is that it’s not scary.

People on the other side of the lens don’t feel like their personal space is being threatened the way it is when you stick an f2.8 70-200mm in their face.

That’s true of many compacts, sure, but then the GH4 has the image quality to boot.

Out from indoors and into the daylight, the GH4’s image quality starts to shine.

I took it to my favourite haunt for capturing test stills, Adelaide’s Himeji Garden, and perhaps more importantly than good images, the GH4 was simply a joy to use.

This part of the testing phase is all about feel in the hand and usability. I want to find out if it’s fun to use and if I can connect quickly to the image I’m trying to create.

Verdict? Yep, and yep. It felt like I’d been using this camera for much longer than the few days of the loan period. Also, the GH4’s wide dynamic range – a shade over 12 stops by my testing – helps deal with high contrast lighting.

Controlling back light and still recording good shadow detail is a litmus test in my book and the GH4 passed with flying colours.

I’m a big fan of the White Balance, ISO and exposure compensation buttons sitting behind the shutter release button.

This placement of the buttons supports an intuitive relationship with their functions.

Overall, the control layout feels very well balanced, as if a photographer was actually consulted in the camera’s design.

The Wi-Fi can be flaky much like every other time I’ve used on-board Wi-Fi so that’s not scoring minus points but be aware of this if you buy it.

Also, I’ve become a dedicated user of focus peaking and found myself as often as not trusting the peaking indications to nail the sharpies.

If the DSLR design has one continuing advantage over DSLM it is that DSLR finders are brighter and optically superior to EVFs, even high-res EVFs such as the GH4’s, so, for those of us with well-aged eyes, focus peaking is an invaluable aid to getting the shot sharp.

There are a bunch of other features to get excited about but just about the best thing I’ve seen in a long time is the ability to edit the exposure curve of the sensor.

Combine this level of control with the GH4’s dynamic range and you should be a master of the universe when it comes to exposures.

Supplied with the review camera was the excellent Leica Nocticron 42.5mm f1.2 lens. I couldn’t take it off the camera. If I were buying, I’d be tempted to forego the kit offering with the 12-35mm lens and just put the Nocticron on and leave it there until I wore the camera out.

Sharp and fast, it’s everything you want in a lens. All the supplied sample images were taken with this lens.

The specs for this camera are extensive. Best to check them out at Panasonic’s web site if you’re interested in the finer details. All I really want to tell you is this camera is the first DSLM I’ve used to earn full marks. It is excellent.