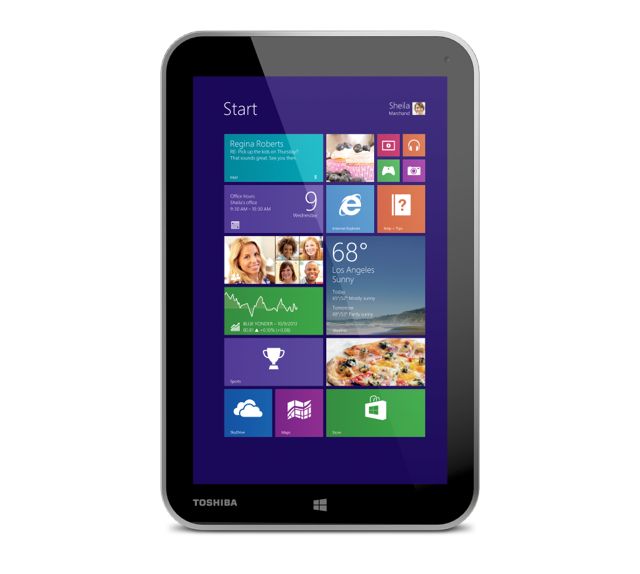 Toshiba has released the Encore – a new 8-inch Windows tablet that packs a lot of power under the hood that’s ideal for both consumers and power users alike.

The device is fully optimised to run a full version of the latest Windows 8.1 operating system thanks to the quad core 4th generation Intel processor on board.

Also onboard is a full version of Microsoft Office Home and Student 2013 which makes the Encore an ideal productivity tool.

Documents can be created on the device and easily stored on the device or in the cloud using the 7GB of free online storage space in SkyDrive so the files can be easily accessed on other Windows devices.

But while the Encore is handy in its tablet format for use anywhere, it can also be utilised on the desktop and connected to a full high definition monitor and used with a wireless keyboard and mouse like a fully fledged computer.

On the connectivity side there is a microUSB port and microHDMI port to make it easy connect peripherals like a DVD drive, an external hard drive and a USB flash drive.

Users can also take advantage of Bluetooth 4.0 to connect a wireless keyboard and mouse.

Toshiba’s Encore has InstantGo on board which means it can spring back to life from sleep in just .3 of a second.

Connected standby means the Encore tablet may appear to be asleep at times but it still connected and file and apps are still kept up to date.

Xbox users can also take advantage of the Encore’s connectivity and utilise the device as a second screen to your gaming experience.

The Encore is available in a 32GB and 64GB version and that capacity can be boosted even further by up to an additional 32GB through the microSD card slot.

Toshiba’s Encore tablet will only be available as wi-fi models with no immediate plans for a 4G version. The company’s thinking is that users can easily create personal hotspots using their smartphones as well as having easy access to wi-fi.

The Toshiba Encore is priced at $399 for the 32GB version and $469 for the 64GB model and will go on sale in early November.