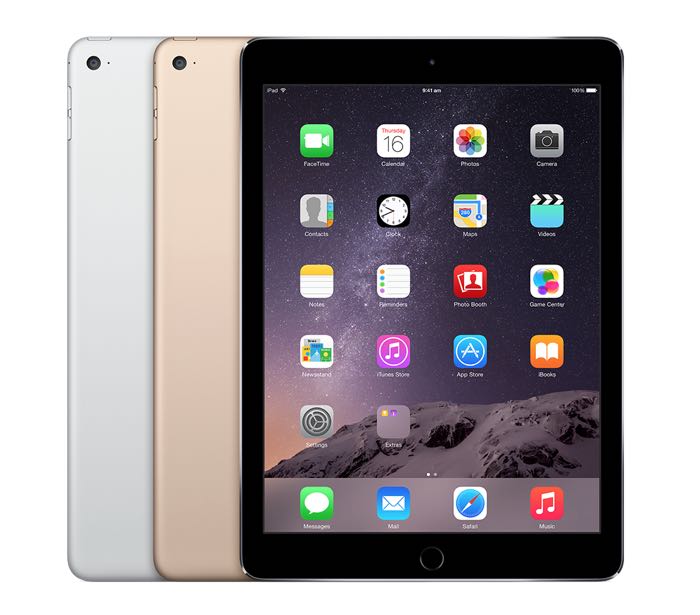 The iPad Air 2 has come a long way since the original iPad was released four years ago and this latest version takes the tablet experience to a whole new level.

Inside and outside there are a number of improvements from last year’s model.

Now it might not look, at first glance, that there’s been any change.

It’s the same width and length as the iPad Air and has the same size 9.7-inch screen but the second you get the iPad Air 2 in your hands you realise it’s a lot thinner.

One feature the iPad Air 2 has lost is the switch on the side near the volume controls to either silence the device or lock the screen from rotating – a victim of the even more svelte design.

In fact if you stacked two iPad Air 2s on top of each other – they would still be 1.2mm thinner than the original iPad introduced in 2010.

These controls are now in the Control Centre that can be swept up from the bottom of the screen.

The iPad Air 2 screen has combined three separate component layers into one which eliminates the gaps between layers and reduces internal reflection.

As a result the image is noticeably crisper and richer with the content even close to your fingertips.

Also on the screen is an anti-reflective coating that reduces glare by 56 per cent. The difference between the iPad Air and the iPad Air 2 was clear to see.

Another new feature on the iPad Air 2 is Touch ID so users can now unlock the device as quickly and easily as their iPhone.

It only takes a couple of minutes to register up to five fingerprints.

We’ve often tried to unlock the original iPad Air – released a month after the iPhone 5S which introduced Touch ID – with our fingerprint only to realise we still had to punch in a passcode. With the iPad Air 2 – that’s now a thing of the past.

But some of the biggest improvements are on the inside starting off with the A8X processor which is using second-generation 64-bit desktop-class processing that makes it 40 per cent faster than last year’s iPad Air.

There’s also been significant performance on the graphics side as well so your games and videos run smoothly and look great.

With this sort of computing power the iPad Air 2 can run apps and tasks that you wouldn’t have imagined possible on a tablet let alone one as thin as this.

Apple has also dramatically improved the iSight camera on the front and back of the iPad Air 2.

We’ve always looked at taking pictures with a large device like a tablet as strange but, when you think about it, it does make sense considering the larger screen to frame your images.

But also onboard now are the camera feature seen on the iPhone – time lapse, burst mode, slo-mo and even high resolution (up to 43-megapixels) panoramic shots.

And of course you can shoot full high definition 1080p videos.

The front FaceTime HD camera now has a larger aperture to let in more than 80 per cent more light.

There are also dual microphones that reduce background noise during your video calls.

The iPad Air 2 is also faster on wi-fi networks with the latest 802.11ac onboard and 4G/LTE has also been boosted with even more bands so it will connect anywhere in the world.

iPad Air 2 is also running the latest iOS 8.1 operating system which itself comes with a raft of features including Continuity, Hand Off, iCloud Drive, Family Sharing and much more.

Battery performance on the iPad Air 2 maintains the already high standard with easily 10 hours of continuous use.

The iPad Air 2 is now available in silver, space grey and – for the first time – in gold.

The iPad Air 2 is an excellent upgrade to an already impressive device with useful improvements across the board.

If you bought the iPad Air last year you can rest assured your device will still hold up well against the new iPad Air 2.

But if you’re looking to upgrade from an older device or looking to replace an old laptop – your new device is right here.