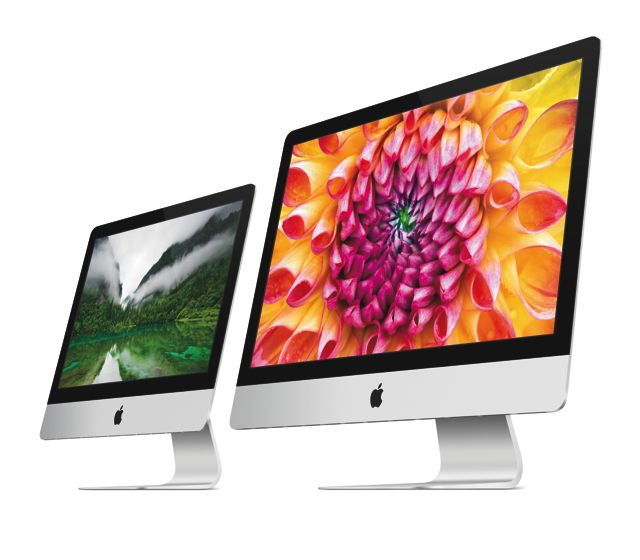 The iMac has undergone some impressive changes since it was introduced 14 years ago and the latest version continues that tradition in dramatic fashion.

Each time Apple has pushed the boundaries in design and technology and the new iMac is certainly no exception.

Not only has the iMac been radically re-designed and improved on the outside, it has also got some impressive updates on the inside as well.

Design is as much a part of Apple’s DNA as innovative technology and engineering and the great news is the company has poured some generous helpings of all of those things in the latest iMac.

The iMac is stunning at first glance with an impossibly thin 5mm edge yet the same size stunning 21.5-inch and 27-inch screens.

The device tapers to the centre of the back panel where the support stand is located.

And Apple went to extraordinary lengths to achieve this look. To create an edge and joint so thin Apple couldn’t rely on traditional welding methods.

Instead it used a process called friction-stir welding to join the front and rear aluminium panels of the iMac at the molecular level and achieve a seamless and powerful join.

This method is actually also used by NASA and Boeing on aircraft wings on booster rockets.

The display has also undergone some changes with the new iMac’s LCD panel 5mm thinner than the previous version.

It also uses a process called full lamination to attach the LCD screen to the glass and eliminate the 2mm gap which used to exist on earlier models.

And the bonus of the full lamination process is 75 per cent less reflection which we plainly saw during our review.

We sat our older iMac next to the new one in an area of our office where a large window behind us can sometimes make it hard to read the screen.

Usually the blinds need to be closed to read the screen. Not so with the iMac. Not only was there hardly any reflection, the colours and picture quality was stunning.

The iMac, despite looking like the after picture of a weight loss ad, still has the same high quality screen.

It has LED backlighting and IPS (in-plane switching) which means the picture maintains its quality at every angle.

Every iMac has also been colour calibrated so it meets colour standards used by professionals around the world.

Under the hood is where the magic happens courtesy of the third-generation Intel Core processors which provide blisteringly fast performance starting at 2.7Ghz and going all the way up to 3.4Ghz.

Powering the screen’s graphics performance is the new NVIDIA GeForce graphics processor that comes into play especially for games and video editing.

This new iMac also introduces a new storage option called Fusion Drive which combines the speed of flash memory with the storage capacity of a regular hard drive.

The system automatically assigns your most used applications to the faster flash portion of the drive for faster access and performance. The iMac’s OS X operating system is also located on this faster part of the Fusion Drive.

All of the ports are located on the iMac – four USB 3.0 ports, headphone jack, SD Card slot, two Thunderbolt ports and a Gigabit Ethernet port.

Previously the SD card slot was located on the side of the iMac below the DVD slot. But Apple’s decision to go for that extremely thin edge meant there was no room for the SD Card slot on the side which meant it had no where else to go but to the back.

But now, instead of just easily inserting your SD card into the side of the iMac, we had to get up out of our chair to insert the memory card.

We tried to locate the slot by feel but could find it very easily which is why we had to get up out of our chair and either look around the back from our seat or walk around to the back of the desk.

Here Apple has chosen design over convenience and is one of the only things we found fault with.

What you won’t find anywhere on the new iMac is a DVD drive. Again Apple’s decision for the iMac’s svelte design meant the DVD drive became a casualty.

I’m still a fan of the DVD drive on a desktop computer and would have preferred an optical drive of some sort on the iMac. I often use my iMac to watch DVDs and would have liked to watch them on the new iMac’s stunning screen.

Apple’s SuperDrive – an external DVD drive – can be used for those who’d like to play DVDs and load software off a disk. It can be purchased separately for $89.

The iMac’s middle name should be speed. Every aspect of the computer’s operation was fast.

Booting up took just 15 seconds so you’re ready to get to work or play right away.

It also powered through photo and video editing without blinking. We very rarely were looking at the spinning wheel waiting for the iMac to finish its processing.

Graphic designers will also see the same amazing responsiveness that comes as a result of the faster processor, Fusion Drive and updated graphics processor.

Also on board the new iMac are two Thunderbolt ports that can be used to connect external hard drives for super fast data transfer or to connect to another monitor.

One pleasant surprise was the quality of the audio output which somehow manages to be fuller and richer even though it’s coming out of a smaller enclosure.

Apple’s new iMac has set a new benchmark in terms of design, features and performance.

Apple has pushed the envelope in nearly every aspect of the product and the result is a stunning desktop computer that is miles ahead of the nearest competitor.

Apple’s redesigned iMac to go on sale this week