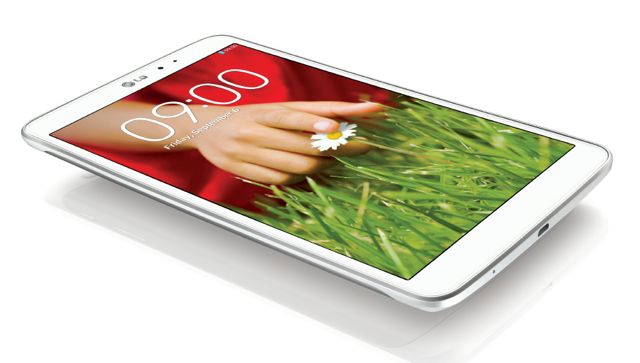 LG’s first entry into the tablet market with the new G Tab 8.3 is an impressive debut with the device able to hold its own with a solid range of features.

The G Tab 8.3, as you may have guessed, has an 8.3-inch full high definition screen that puts the product right between the popular 7-inch and 10-inch display sizes.

This fact alone will attract a few users who couldn’t decide between the smaller and larger sizes.

The LG G Tab 8.3 is the “Goldilocks” solution because it’s not too big, and not too small – it’s just right.

As a result the Android-powered product is easy to hold in one hand while still having a screen that’s large enough to enjoy your content whether its an app, the web, a movie or an ebook.

It’s also quite easy to store in a bag or a briefcase to use on the go as well.

The device has a solid build quality and a nice finish to give users a satisfying feel in their hands.

And that 8.3-inch screen is full high definition IPS (in-plane switching) so you can appreciate the quality from any angle.

Even though the LG product’s screen is just .4 of an inch larger it has a longer and narrower screen which is suitable for watching movies that almost fill the entire screen.

There are no physical buttons on the front of the device while the right edge has the on/off/lock key and volume controls.

Along the top edge are the headphone jack and the microSD card slot to expand the onboard 16GB by up to another 64GB.

The rear panel is made of brushed aluminium and it is here where you’ll find the 5-megapixel camera. The front facing camera is 1.3-megapixel.

The main camera is not going to take over from your smartphone or dedicated digital camera as your main shooter but it can offer a decent on-the-spot solution to capture the moment whether it’s a picture or video.

LG has been making some headway in the smartphone market and its most recent offering – the G2 – brought a few new features to the table.

The good news for customers is that LG has brought some of these standout functions to the G Tab 8.3 as well.

These include multi-tasking features like QSlide where you can run multiple apps at once and adjust the window size of each and the transparency to view them all together.

The other inclusion is Slide Aside where you can have three apps running at once and being able to easily slide between them.

Also on board is Knock On where users can simply double tap the screen to put it to sleep and double tap again to wake it up.

But an all-new feature is Q Pair that means you can pair an Android smartphone to the G Tab 8.3 so the tablet can display notifications like messages and incoming calls on the screen.

It can also track content and apps you’ve been viewing on your smartphone and earmark it for the G Tab 8.3 if you wanted to watch on a larger screen.

Users can even control their TVs with the built-in QRemote functionality so if you’ve got the G Tab 8.3 on the couch while watching your favourite programs you don’t need to reach for the actual remote – you can control it all with the LG tablet.

As a result the device is very responsive so users can get to their apps quickly and open and close them in an instant.

This power also helps with the device’s excellent multi-tasking features as well.

The device is running Android 4.2.2 Jelly Bean but has a solid layer of LG’s own user interface which some might equate to a thick layer of icing on a cake. Some like a lot of icing while some prefer none.

But in our review of the device we found the G Tab 8.3’s UI didn’t compromise the Android experience too much.

In fact we found LG’s added touches gave the device an added dimension to make it stand out from the large number of vanilla Android tablets already on the market.

Battery performance is also quite impressive. Onboard is a 4,600mAh battery that easily ran for more than two days with regular use.

If you’re watching videos on a flight, for example, on the device you’ll get through about nine or 10 hours.

LG has priced the G Tab 8.3 at $399 which makes it more expensive than other devices in this class and just $80 cheaper than the iPad Mini with Retina Display.

LG’s G Tab 8.3 is a worthy new entry in the tablet market that can comfortably sit along side brands that have been in the market for years.

The device is well-built and offers high-end performance and a screen size that will appeal to a wide range of users who will use it as a work tool and an entertainment device.

Throw in the range of cool new features LG first introduced with its smartphones and you’ve got a tablet device that won’t just blend into the sea of tablets already available.

Foxtel will also be offering broadband and telephony services in 2014