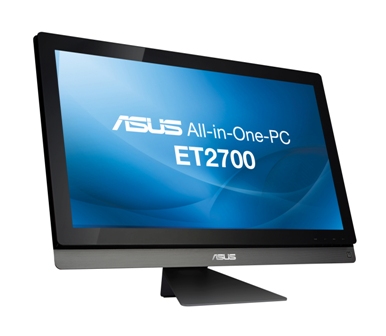 The emphasis of the Asus ET2700 is on style and design and is the sort of computer that would not look out of place out on the open in a living area rather than being hidden away in a room.

It sits on a small stand with the screen at a slight tilt for comfortable viewing and touchscreen interactivity.

And having an LED touchscreen means the ET2700 can be a convenient family computer which can be used for work and play.

It can also be used to store and browse your digital images and even used as a notice board with the ability to pin notes to the device’s homescreen.

On the entertainment side, the ET2700 is also a full high definition TV complete with a built-in digital tuner and a Blu-ray Disc player.

Another key feature is the 10-point multi touch display which means the Asus ET2700’s screen goes far beyond the traditional two finger multi touch interface and opens a number of possibilities around gaming, productivity and entertainment.

The ET2700 was running the Windows 8 Consumer Preview – the precursor to the official version due around October – when we first saw it at the launch but will ship with Windows 7.

But the beauty of the upcoming Windows 8 operating system is the fact it has been optimised for a range of touchscreen devices – making it a natural for the Asus ET2700.

Under the hood the Asus ET2700 has pretty impressive specs including the option of an i5 or an i7 processor with up to 8GB RAM, a 1TB or 2TB hard drive and wi-fi connectivity.

There are a number of ports on the side edge of the device including an e-SATA port to link an external hard drive, an SD card reader, two USB 3.0 ports, audio line out, headphone jack and a mic input.

The ET2700 also comes with a small wired subwoofer to add a bit more punch to the audio output when watching movies and playing games.

Speaking of sound the device SonicMaster technology onboard as well which has been digitally optimised to produce clear sound with no distortion.

The Asus ET2700 is priced at $2999 and is available now from Harvey Norman stores.