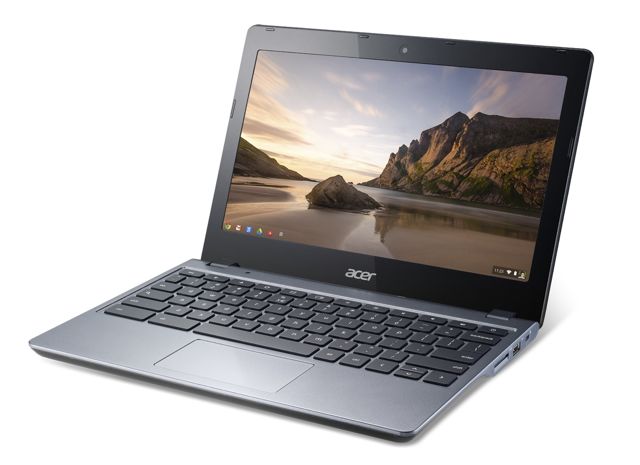 If you’re not in the Windows camp and not interested in a Mac, there’s another alternative in the shape of a Chromebook like the Acer C720.

The device is a cross between a netbook and a full blown laptop with an 11.6-inch display with a 1366 x 768 resolution.

It has the same ports you’d expect to find on a laptop like USB, HDMI and headphone jack along an SD card slot.

But it’s on the software side where you’re going to see exactly how a Chromebook differs from a traditional laptop.

Web giant Google is the company behind the operating system and, as you’d expect, it leans quite heavily on web-based apps and features.

The Chrome operating system, named after Google’s popular browser, is Linux based.

The Acer C720 comes with 2GB RAM and 16GB of internal flash storage. Specs like these are the sort you’d find on a smartphone or tablet.

But the real power of the product comes from its connectivity and the many Google services at your disposal.

Everything on the Acer C720 runs on the Chrome browser and taps into your existing Google account.

This internet optimised product uses your Gmail account for email and other Google services like Google Docs and Calendar to replicate the functionality that requires full blown locally stored applications on a regular computer.

But the hard drive of the C720 is not found on the device itself but rather in the cloud with Google Drive.

Having this sort of sleek structure has many benefits.

For start it’s very fast. The Acer C720 can start up in just seven seconds because it doesn’t have a bloated operating system to boot up.

Under the hood is an Intel Celeron 2955U 1.4Ghz dual core processor

If you have an existing Google account then you’re good to go. Simply log in the first time you turn it on and it’s all set up.

Each subsequent log-in requires just a password and in seven seconds you’re ready to get to work.

The Chrome system, being a constantly connected system, is always up to date and puts all of your documents, websites and emails right at your fingertips.

And because you’re tapping into a cloud-based storage system it is also possible to access your emails and documents on other devices like smartphones and tablets.

More and more web apps are being developed for the Chrome system to join the thousands that are already in existence just like those that can be found in iOS and Android.

You can create documents, spreadsheets and presentations within Google’s ecosystem and even collaborate with others on the same project.

The device will work when it is offline and users will still be able to open and edit documents.

Acer’s C720 has a nice sized keyboard which might lack the width of a regular laptop but it still comfortable to type on.

Battery life is also impressive at more than 8 hours which is optimised because its greatest strain is having a constant wi-fi connection rather than constantly spinning up a hard drive and accessing documents in the memory.

But perhaps one of the most important places where the Acer C720 has streamlined is the price tag. The product is priced at $399.

The Acer C720 is fast and handy solution for a wide range of users who don’t want to pay for extras features they won’t use.

The device is suitable for anyone from students to road warriors and its always-connected system means we can be productive from anywhere.

Throw in the excellent performance with the more affordable price and you’ve got a solution that offers value and functionality.