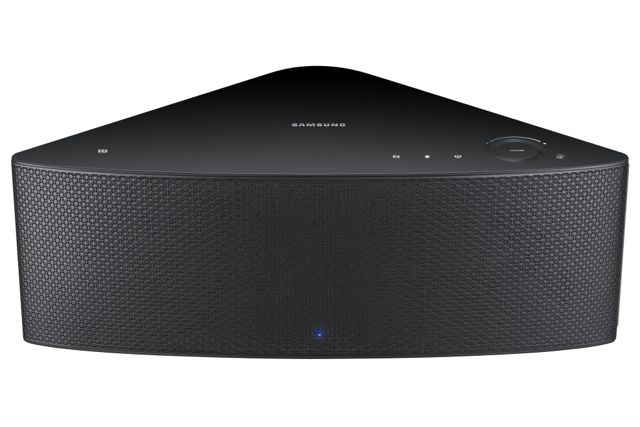 Samsung has ventured into wireless multiroom speaker territory – a market pioneered by Sonos – with the new triangular M5 and M7 speakers.

The speakers are designed to connect to your network and allow the listener to control the music using their smartphone.

The M5 and M7 can be set up in separate rooms and controlled individually or united as one to play the same music.

Tech Guide took the Samsung M7 for a test drive and connected the speaker to our own network.

The triangular shape of the speaker makes it a stylish addition to your room rather having a boring box shape.

The speaker can be rested on its base or on its side with the included stand.

The M7 has both Bluetooth and Wi-Fi so if you’re buying a single speaker you can connect to the speakers either way.

If the M7 is close enough to your router you can actually connect the speaker with an Ethernet cable.

Or if you want to use Bluetooth, the M7 also has NFC (near field communication) so any compatible smartphone can simply be tapped on top of the speakers for pairing.

If you’re using an iPhone you’ll have to find the M7 in your list of devices in the Bluetooth settings.

Next step is to download the iOS or Android Samsung Wireless Audio Multiroom app and from here you can access your music services like Pandora , Spotify, Deezer, Rdio, TuneIn Radio as well as your own music to play through the M7 speakers.

To connect multiple M5 or M7 speakers you’ll need a Samsung Sound Hub to act like the air traffic controller for your system.

Instead of connecting the speaker directly to the network you connect the Samsung Sound Hub to your router.

This is a pretty easy task with the WPS (wi-fi protected set-up) button that can connect to your router without having to type in a long password.

The actual link took a few minutes to complete and the app also needed an update which took another few minutes so some patience is required.

The good news is it was worth the wait.

The audio quality is superb. There are actually five component speakers on board the larger M7 including a woofer to handle bass and drivers for mid and high range audio.

The result was a warm, clear and very satisfying output.

Bass was handled just right without being too dominant while the speaker sound was still crisp enough to handle the finer details of the music.

Whether we were listening to talkback radio on TuneIn Radio or a song on Pandora, the M7 showed its versatility with clear sound.

The app – which works on iOS and Android – is easy to navigate and brings all of your sources to one place.

But when we chose Spotify it only allowed us to control the music through the actual Spotify app and we had to choose the source where we wanted to hear the music.

The Samsung M7 was an option and when we selected we couldn’t hear anything. This was the case with Spotify on iOS and Android after we tested both.

After a few attempts when the music wasn’t working it just suddenly worked. We don’t know what we did different but it just started to work.

It couldn’t have been the network because we were streaming the other services through Samsung’s app quite well.

The Samsung M7 speakers are available now in either black or white and are priced at $499 per speaker. The Samsung Sound Hub, to run more than one M5 or M7 speaker on your network, is priced at $79.