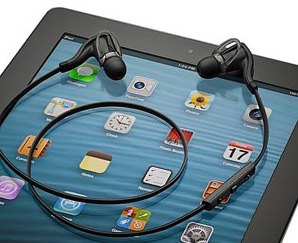 Plantronics has released the second version of its BackBeat GO wireless in-ear headphones and have delivered a significant improvement over the original.

The BackBeat GO 2 is still wireless and connects to your device via Bluetooth and takes out the biggest interference in the portable audio experience – the cable.

This proves handy for listening on the go, when you’re commuting and when you’re exercising.

Plantronics has even added a military grade sweat proof coating to protect the BackBeat GO 2 while they’re exercising.

The only cable in sight with the BackBeat Go 2 is the flat cord connecting the small left and right ear buds.

Each bud is not much bigger than a regular corded pair of in-ear headphones and they contain the audio technology, the Bluetooth module and a rechargeable battery.

On the cord is an in-line remote and microphone that is used for controlling the volume and navigating your music.

And, if the BackBeat GO 2 is connected to a smartphone, this controller can also be used to make and receive calls.

Our only gripe with the device was the occasional lack of responsiveness of the buttons on the remote.

We found it difficult at times to get the double click right to advance to the next song. Once we accidentally redialled the last number we called when trying to move to the next track but this was only a minor complaint.

The headphones are quite lightweight so they’re comfortable to wear and also come with three different silicone tips to ensure a noise-cancelling seal and a comfortable fit.

Audio quality is a definite step up from the previous model especially in the bass department – an impressive achievement when you consider such a large sound coming from a relatively small ear bud.

Even at the mid and high levels, the BackBeat GO 2 holds its own for a satisfying all-round sound.

Set up is pretty simply thanks to the voice prompts which will let the user know when the device is on, connected and when it’s been turned off.

When paired with an iPhone or iPad, an onscreen indicator lets you know the status of the battery.

Android users can also install a Plantronics Battery Meter widget to keep an eye on the device’s battery level.

Speaking of the battery, the BackBeat GO 2 is recharged through the microUSB port in the right ear bud. On a full charge you’ll get about four and half hours of playback time.

This might not seem like a long time but the good news is the DeepSleep Hibernation mode can hold the charge between listens for up to six months.

But there’s also another way to keep the device charged on the go with the specially designed carry case.

But it’s a carry case with a difference thanks to built-in battery which can be used to recharge the BackBeat GO 2 twice for an extra 10 hours of playback time.

Just connecting them to the carry case for 20 minutes adds an extra hour listening time.

You can also check the battery level of the case itself simply by pressing the battery icon on the front.

With the BackBeat GO 2, Plantronics has created a product that offers high quality audio, versatility, convenience and durability.

If you like to hear your music anywhere without the tangle of cables then the Plantronics BackBeat GO 2 wireless in-ear headphones should be near the top of the list.