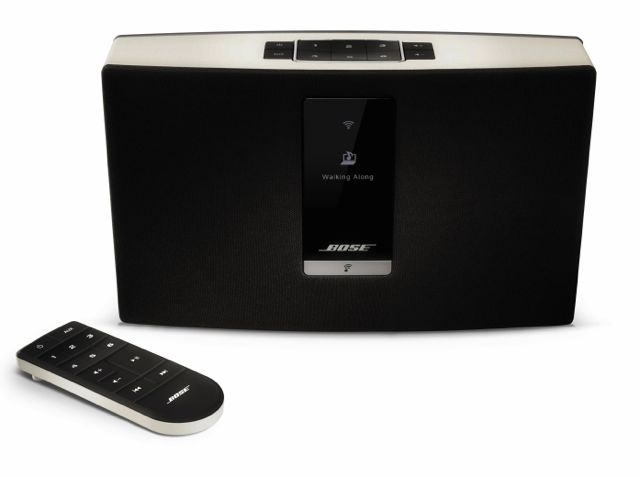 Bose has unveiled SoundTouch – a new wireless home audio solution that offers the benefits of a connected system but with a simplicity to make it easy for anyone to use.

The idea behind SoundTouch is being able to give users access to their music – whether it be the files on their computer, a streaming music service or an internet radio station – anywhere in their home.

All have built in wi-fi and the same keypad controls and they can be controlled all together or individually with the new Bose SoundTouch app for iOS, Android, Mac or Windows.

The various SoundTouch all-in-one models can be used individually in various parts of the home playing their own music and they can also be united to play the same music at the same time.

The app’s strength, and a feature missing from similar wireless systems, is its ability to set up presets to give listeners access to their favourite music literally at the touch of one button.

There are six presets which can be easily created using the Bose SoundTouch app and these can be entire playlists, albums, favourite artists and even radio stations.

Once these are programmed, accessing them on the corresponding SoundTouch is as easy as turning on a light switch.

For example, if you know that preset number one is The Beatles – just press number one on the device’s keypad on top of the product and The Beatles will begin to play immediately.

At launch the only streaming music service supported will be Pandora – available in Australia and the US – with popular services to follow in the near future.

We’d expect other popular music streaming services like Spotify, Rdio and Deezer would be candidates to become part of the SoundTouch solution.

Removing the barriers to your favourite music is what Bose believes will encourage its customers to listen to even more music.

Tech Guide was able listen to the entire line-up of products in a New York home that was set up with Bose SoundTouch in various rooms.

The SoundTouch 30 ($899) is 43.2cm wide and offers Bose’s proprietary Waveguide technology and a built-in subwoofer for superior sound.

The SoundTouch 20 ($549) is slightly smaller at 30.5cm wide but still offers a room-filling sound.

The SoundTouch Portable ($549) is 25.4cm wide and has a built-in rechargeable lithium ion battery so it can be easily be taken from room to room.

Each product has the same keypad on the top panel of the product – including the six preset keys – along with volume controls.

There is also a display on the front of each SoundTouch which can show the name of the track playing as well as the preset number if it has been selected.

Also onboard the SoundTouch products is AirPlay so users can stream content from their iPhone, iPad or iPod Touch.

Bose’s new SoundTouch will expand to its other product lines with SoundTouch versions of the popular Wave music systems available later this year. These systems will also be controllable by the SoundTouch app alongside all of the other SoundTouch systems in the home.

SoundTouch will also extend to other Bose outdoors speakers to stream music to your patio or deck as well as to the LifeStyle home theatre systems and VideoWave televisions systems with the addition of a wi-fi dongle and a software update.

* Stephen Fenech travelled to New York as a guest of Bose