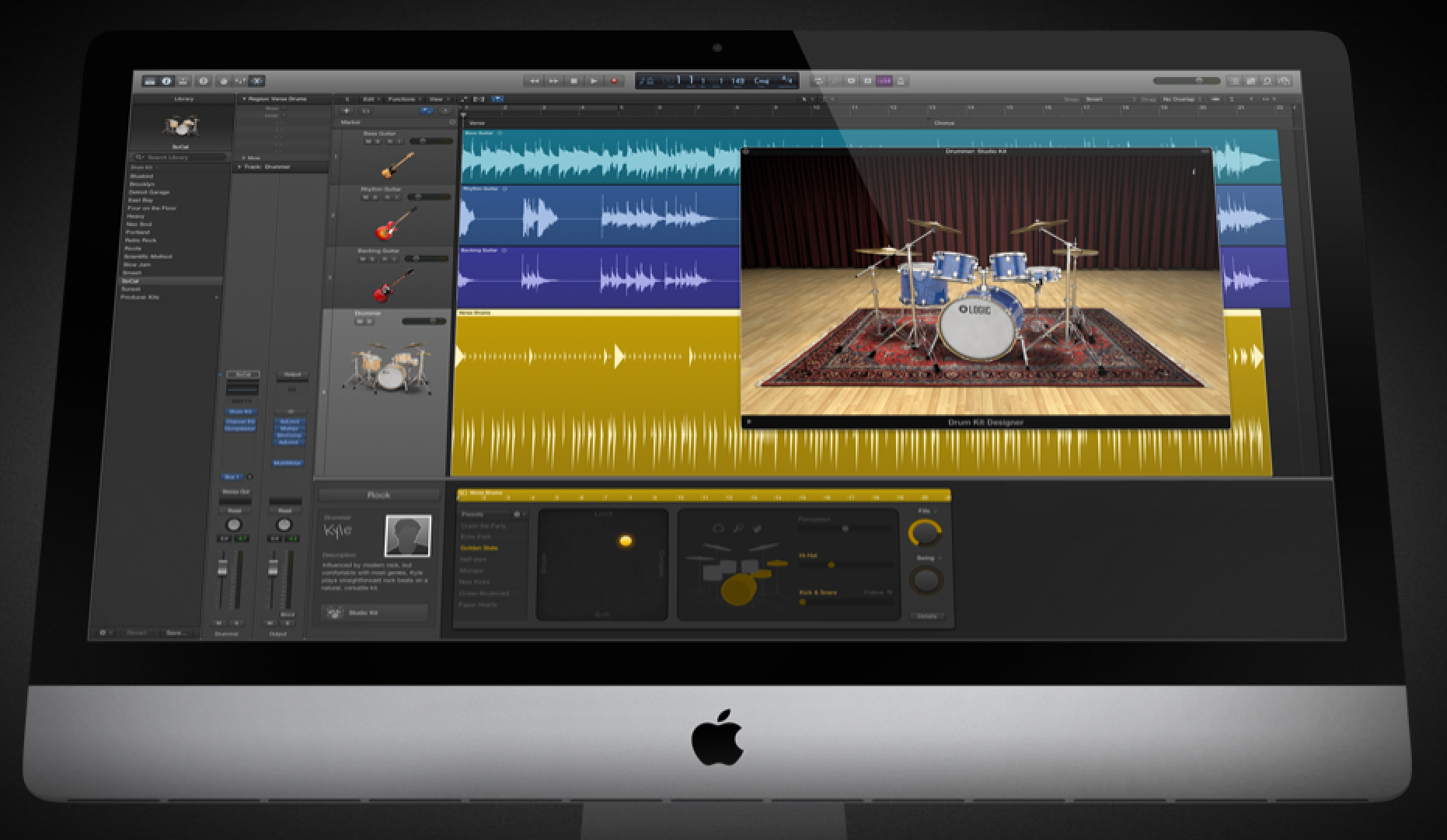 After all, there hadn’t been a new version of Logic since 2009.

Sure, 64-bit compatibility had been added as a tweak but the great fear among the home recording and professional studio brigade was that Apple had abandoned its pro users.

Much of the criticism of Final Cut Pro X suggested the program had been dumbed down.

Long-term professional users felt their trusted workhorse had been hobbled to make it more accessible to people who use video software to make videos of their grandchildren.

Subsequent revisions addressed some of the criticisms from hard-core users but, paradoxically for tech-heads, the total ground-up rebuild meant learning virtually an entirely new program.

Fuelling the fear that Logic X might be the equivalent of a souped-up Garage Band, just as Final Cut Pro X seemed an older brother to iMovie, was Apple’s reluctance to address calls for an upgrade to its Mac Pro desktop range.

The giant cheesegrater aluminium box had barely changed since its release in 2003 and its internals were last substantially updated in 2010.

So just as Logic/Mac Pro users were readying the lifeboats and eyeing off the fast moving Windows world with a PC they could build or upgrade themselves as well as Logic’s Windows capable DAW competitors ProTools and Cubase, the heavens opened in June when Apple announced an all singing, all dancing brand new Mac Pro.

The stunning and innovative cylindrical design – more Borg technology than cheesegrater – took the industry by surprise and restored hope to the faithful.

Then, like another bolt from Valhalla, last month the long awaited Logic Pro X magically appeared for download from the Apple app store for US$200 ($A209).

This is what Logic Express – the compromised light version of previous Logic incarnations – used to cost.

And lo, it was the program users know and love with almost nothing removed, with better functionality, a cleaner, sexier interface and more treasure under the hood than in all the Pirates of the Caribbean movies combined.

To be clear, Logic is not an application that can be picked up in an afternoon – it takes a fair investment in time and possibly training to get to grips with its enormous potential and complexity.

But it must be said that Logic X has cleverly addressed some of the issues that made the program unwieldy for beginners.

And though the pro community eagerly awaits the new Mac Pro (roll on the American Fall), the program works magnificently on the new iMacs, or indeed any Apple machine that uses OS X 10.8.4 (Snow Leopard), has enough RAM and can support an audio interface.

For my review Apple sent along a brand new 27-inch iMac with all the bells and whistles including Thunderbolt and USB 3.0 ports, 2.9GHz Intel core i5 processor and 8GB of RAM. But I found the program worked every bit as well on my 2009 Core 2 Duo iMac with 16GB RAM.

As an avid user of Logic 9, I can happily report that projects from the former open seamlessly in the new version – which means the migration is pretty painless.

There have been numerous productivity enhancements to Logic Pro X. Here are some of them.

This allows you to easily select one of 15 drummers, each with his own approach.

As in many of the enhancements in Logic X, ease of use is paramount. So to beef up and provide variation to a repetitive drumming loop – the percussive basis of many contemporary rock, pop, hip-hop and country songs – you simply choose a drummer by name and move the cursor in a box on the screen to vary his timing, make him swing or groove more, make him play it straight, or increase his fills and variations.

If you’re not satisfied with the way he sounds, you can replace him, or any of the items in his drum kit at will. If I were a drummer, I think this is the first time technology might have made me nervous. See the video for a demonstration.

Home recordists who work alone with any major DAW software know too well the frustration of having to reach over a guitar or other instrument to fiddle with the mouse to record another take, to activate recording or to return to a marker location within the song.

Logic Remote – a free download for your iPad from the app store – allows you to completely control the recording application from an iPad you can park by your side. The only requirement is that your iPad and main machine must be on the same network.

Latency – the interval between the moment you press a button and the system’s response – is negligible. This is not just incredibly convenient. it is a kind of 21st Century magic.

Logic 9 introduced flex-time, which sounded like a way to work when it suited you in the public service but was actually a brilliant way to re-engineer mismatched pieces to bring them into time.

Logic X introduces Flex Pitch with more ways than you can poke a stick at it to change the pitch of audio elements, including singer pitch correction. Not so “pitchy” now, eh?

It could be a royal pain to have to dig through parameters of plug-ins and so on to change sounds in complex mixes.

In line with the core mission of Logic Pro X – which seems to be to make to make things easier, especially for beginners – Smart Controls let you manipulate multiple plug-ins and parameters with a single move. They are available for every patch in the quite vast sound library.

Electric guitarists were reasonably well catered for in Logic 9 with a range of pedal boards for cool, grungy or even heavy metal sounds.

Logic Pro X extends the favour to bassists. So if you were thinking of getting real bass into your tracks but couldn’t be bothered with a bass amp, your dreams may just have come true.

Guitarists haven’t been forgotten either, with seven new guitar stompbox effects. And there’s a much improved tuner available to any audio track, accessed from the transport bar.

Logic Pro X is sensational value and future-proofs one of the world’s finest recording software packages.

It has everything you need to go from enthusiastic amateur to total recording professional.

All that possibly could be done to make this journey as straightforward as possible has been done, yet nothing has been removed from the grasp of hard core professionals.

That’s an achievement to celebrate.

* Ian Cuthbertson is a musician and former News Limited journalist.You can download his album “Fathom” here.