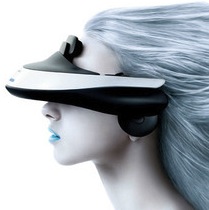 Sony’s Personal 3D Viewer, which is like your own personal theatre, will be available for pre-order this week.

Tech Guide first saw an early model of the Personal 3D Viewer at last year’s Consumer Electronics Show and spotted the consumer version, which is about to go on sale in Australia, at the most recent CES.

The device is worn like an oversized pair of glasses and cuts out all the outside light completely.

Inside is a 18mm diagonal OLED (organic light emitting diode) screen with a high definition screen with a resolution of 1280 x 720.

When the Personal 3D Viewer is worn, the user gets a close up view of the screen which is designed to replicate the view of a 750-inch screen viewed from a distance of 20m.

It’s like your own portable movie theatre which can play both 2D and 3D inputs and enjoy movies and games.

It uses separate panels for the left and right eyes that alternate hundreds of times – just like the active 3D glasses with a 3D TV – to create the 3D effect.

Tech Guide had a chance to use Sony’s Personal 3D Viewer and it did feel like we were looking up at a big screen.

It was a little heavy and, although we only used it for a few minutes, it was still an effort to hold your head up. The best viewing position is reclining on a chair or a lounge with your head on a cushion.

But one thing Sony’s HMZT1 is not is a portable device.

The potential customers thinking they will be able take this with them on their next flight had better think again.

The Personal 3D Viewer is designed for use at home because it needs to be plugged into a source – Blu-ray player, gaming console – just like a regular TV.

The Sony Personal 3D Viewer is available from Friday for pre-order and will be priced at $899.

Stay tuned to Tech Guide when the device is released for our complete review.