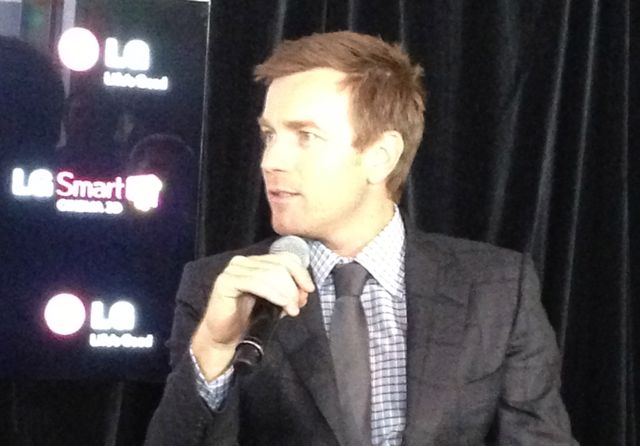 Ewan McGregor has been revealed as the new face of the LG smart TV range after a launch in a luxury Darling Point mansion overlooking Sydney Harbour.

LG outlined its plans for the smart TV market and stated it was taking things up a notch with a new range of ultra high definition TVs and a stunning curved OLED display.

McGregor, star of more than 50 films including the Star Wars prequels, The Impossible, Angels and Demons and Black Hawk Down, will star in two LG TV commercials and will also appear in the LG print campaign.

“Ewan McGregor is widely considered to be one of the world’s most engaging actors so we are both proud and thrilled to announce our partnership with him and delighted that he will be promoting the new LG Home Entertainment range in Australia and New Zealand,” said Lambro Skropidis, Marketing General Manager for LG Australia.

The company says it’s not satisfied being a fast follower but is intent on moving into a bold new direction but still be sticking by its main pillars – design, enhanced experiences and connectivity.

And to do that you can’t just offer more of the same but innovation and an improved experience.

This comes in the form of even more Ultra High Definition TVs and a curved OLED TV.

McGregor says his involvement with LG by is a good fit because all of the movies he makes will eventually be seen on a TV and the higher the quality the better.

“That’s like a cinema experience at home. That looks amazing and everywhere you look from the screen is crystal clear and sharp – it looks like you’re falling into it.”

With Ultra High Definition – also known as 4K and four times the resolution of full HD – LG was one of the first to offer their 84-inch model which, at $16,000, appeals mainly to the top end of town.

But this year LG will also offer UHD TVs in 55-inch and 65-inch sizes in August to bring the technology within reach of average consumers with prices expected to be $6999 and $8999 respectively.

Included with the new panels will be a soundbar to offer enhanced audio as well as an ultra high definition picture.

When the TV is switched on, the soundbar slides out into place and retracts out of sight when the TV is turned off.

The curved OLED has a 55-inch screen that’s just 4.3mm thick and that arcs at a 15 degree angle to allow the edges of the TV to be just as close to the viewer’s eye as the centre of the screen.

The subtle curve also helps with the viewing angle so people sitting to the side of the screen can see even more of the picture.

There’s even a built-in golf coach on board the LG smart TVs to help improve your swing.

The LG 55-inch and 65-inch Ultra High Definition are due in August while the curved OLED was not given a release date but is expected to sell for around $15,000.