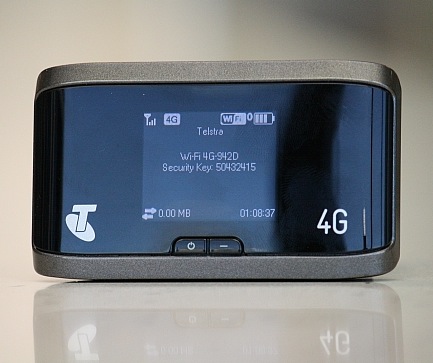 The Telstra Mobile 4G Wi-Fi (available now for business customers) and the Bigpond Mobile Wi-Fi 4G (available March 27 for personal use) can both connect up to five devices wirelessly to the internet via Telstra’s fast network.

And when is it used outside of 4G areas the Mobile 4G Wi-Fi device can still be used on Telstra’s 3G network at faster than normal speeds thanks to the HSPA+ dual channel technology onboard.

Users can reach speeds of up to 20Mbps on the Telstra’s 3G network in capital cities, airports and major regional centres.

The Telstra Mobile 4G Wi-Fi device only weighs 100g and is small enough to fit in your pocket or bag.

Once it is set up, the device creates a wi-fi hotspot which can be easily accessed by wi-fi-enabled devices within range with a password.

But with the Telstra 4G Wi-Fi there is a built-in rechargeable battery which, on a full charge, can provide up to four hours of connectivity plus 100 hours of stand-by time.

The front of the product has a display which indicates the signal strength, the wi-fi name and password, battery level and the number of devices that have been connected.

The full range of plans and data allowances can be seen here.