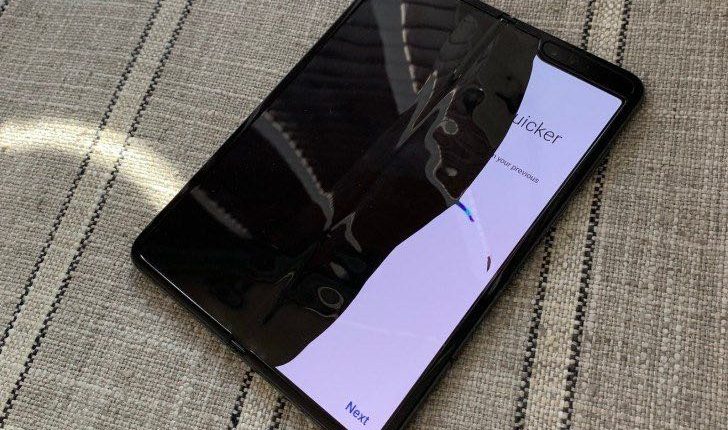 Has the folding phone fallen at the first hurdle? Samsung is in crisis mode after some influencers and US tech journalists broke their Galaxy Fold and reported issues after just two days use a week before it goes on sale in the US.

Samsung issued review units of the highly-anticipated Galaxy Fold to US-based YouTubers, influencers and journalists who promptly released videos unboxing the device and giving their first impressions which were all positive

But disaster struck a day later when some of the Galaxy Fold recipients started reporting issues.

For some it was an error on their part after mistaking the top layer of the plastic polymer display for a screen protector and peeling it off.

This layer was actually an important part of the screen and their devices began to malfunction.

After one day of use… pic.twitter.com/VjDlJI45C9

Samsung includes a warning inside the packaging for this layer not to be removed – a warning that was obviously not observed by some of these users.

Same though I had started to peel this yesterday not knowing and then it got worse today pic.twitter.com/jzETs0mCR3

Some other Galaxy Fold reviewers, including the CNBC tech editor and a writer for The Verge, also reported screen defects.

These users didn’t remove the protective layer yet still had issues with the phone.

In the case of The Verge, a small lump appeared beneath the screen that distorted the display.

It appears something got under the screen through a small gap between the screen layers at the hinge to cause the issue.

By the next day, that small bulge had broken the screen and caused white lines to appear on the display.

“A limited number of early Galaxy Fold samples were provided to media for review. We have received a few reports regarding the main display on the samples provided. We will thoroughly inspect these units in person to determine the cause of the matter.

“Separately, a few reviewers reported having removed the top layer of the display causing damage to the screen. The main display on the Galaxy Fold features a top protective layer, which is part of the display structure designed to protect the screen from unintended scratches. Removing the protective layer or adding adhesives to the main display may cause damage. We will ensure this information is clearly delivered to our customers.”

So what does this mean for Samsung?

It doesn’t look good for them on the eve of a massive product launch.

Not all the review units were affected, only a small number – but it still looks like a significant issue.

In the case of users removing the protective film, Samsung will have two include a more visible warning for customers in the retail version of the packaging.

But what about the screen defects?

Does Samsung need to delay the release of the product – due in stores in the US at the end of next week – to rectify the problem?

Samsung was also preparing for the Australian launch of the Galaxy Fold which is expected in late May.

The phone comes with this protective layer/film. Samsung says you are not supposed to remove it. I removed it, not knowing you’re not supposed to (consumers won’t know either). It appeared removable in the left corner, so I took it off. I believe this contributed to the problem. pic.twitter.com/fU646D2zpY

But the issues we are seeing in the US may push the Australian launch date back even further.

It wasn’t so long ago where the electronics giant was faced with another crisis with the Galaxy Note 7 which was recalled and eventually scrapped after customers reported exploding batteries.

To its credit, Samsung dealt with that crisis openly and honestly and retained its status in the marketplace.

While the Galaxy Fold problems are not as serious as the Note 7, Samsung still faces a challenge as it introduces this completely new format to the market.

You only get one chance to make a first impression, and this problem may make customers hold off adopting the new folding phone form factor.

Huawei is also due to release its folding device – the Mate X – in the coming months.