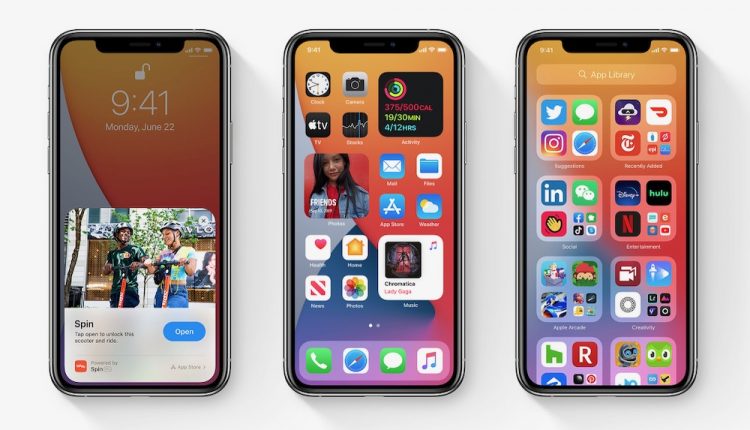 Apple has kicked off its virtual Worldwide Developers Conference by announcing updates across all its platforms including iOS and macOS which now have a more universal look and feel. 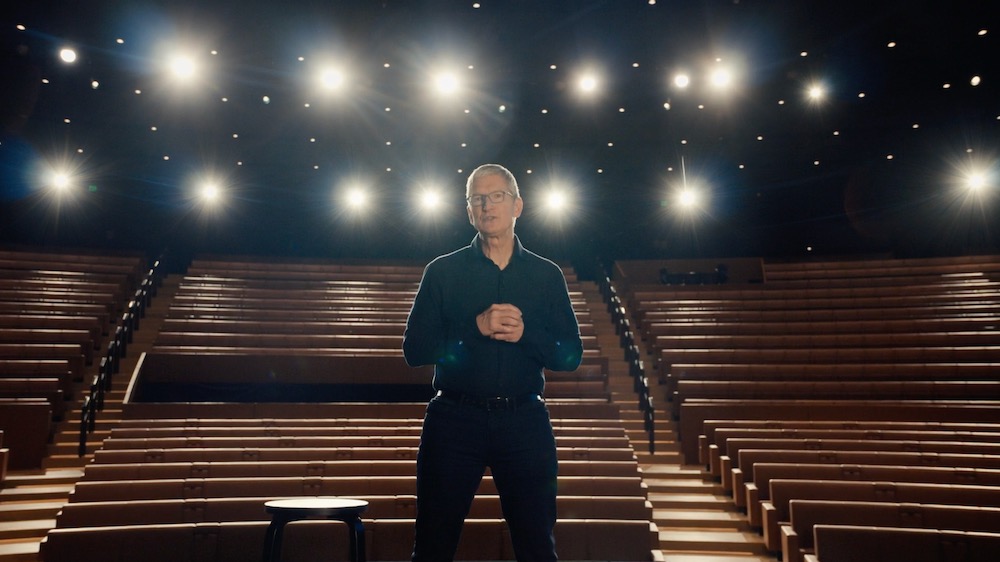 iOS 14 is Apple’s biggest update for the iPhone for years and will offer huge changes to the way the operating system looks and feels since the introduction of the iPhone in 2007.

The biggest shift will be to the home screen which will no longer just be the same grid of apps.

“iOS 14 transforms the most iconic elements of the iPhone experience, starting with the biggest update we’ve ever made to the Home Screen,” said Craig Federighi, Apple’s senior vice president of Software Engineering.

“With beautifully redesigned widgets on the Home Screen, the App Library that automatically organises all of your apps, and App Clips that are fast and easy to discover, iPhone becomes even more powerful and easier to use.”

iOS 14 will be offered as a public beta in July before being available later this year – most likely in September.

iOS 14 will work with al iPhones dating back to the iPhone 6S.

Here are all the new features of iOS 14 for the iPhone: 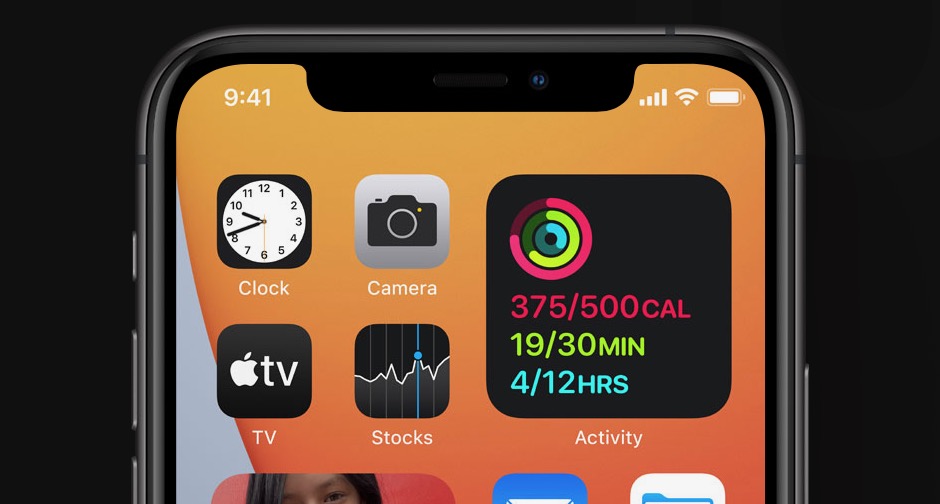 Apple has redesigned the home screen with the App Library to help users keep track of their apps rather than scrolling for pages and pages.

App Library can intelligently categorise your apps to make it easier to find what you’re looking for.

There is also a recently installed section and you can search in a list view.

Users can now choose how many home screen pages to display and hide others for faster access. 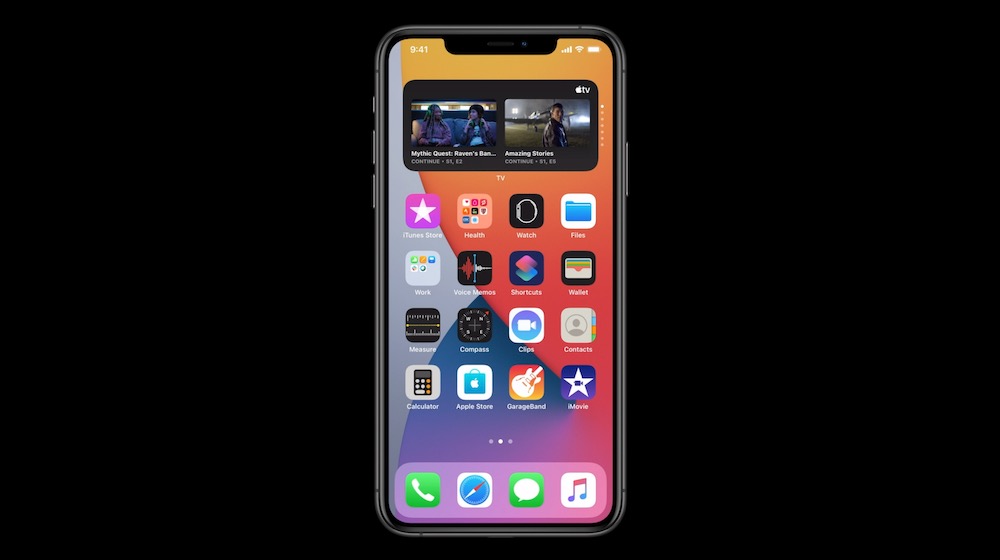 In iOS 14 you can now drag widgets into your home page which are customised for work, travel, news, weather and entertainment.

These can be pinned in different sizes in your home screen. 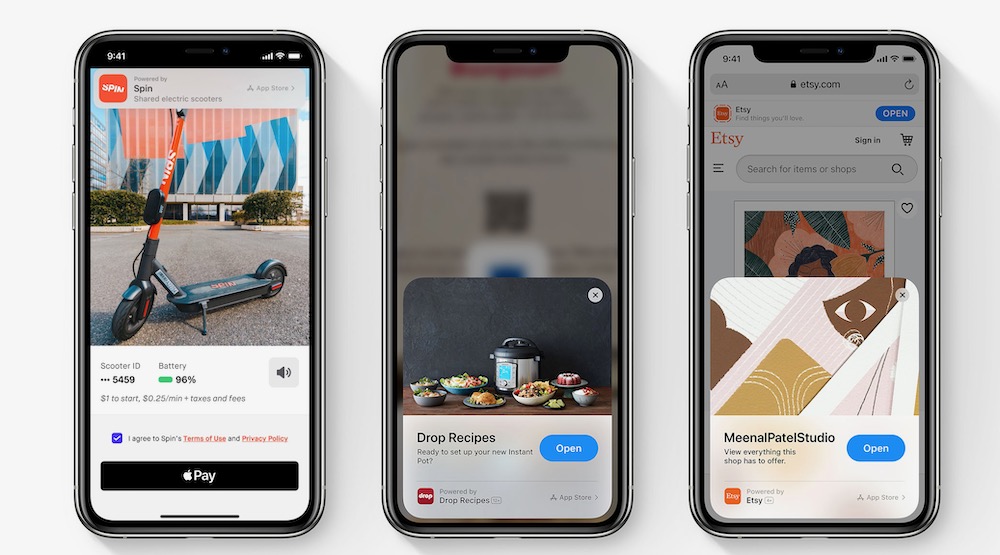 App Clips is a small part of an app that makes it easy to use that app without going through the whole procedure of downloading the full application.

This makes it easy use the part of the app when you need it – like when buying a coffee, hiring a scooter or paying for parking.

App Clips will be accessible through NFC (near field communication) and QR codes and a new Apple App Clip code.

They can also be shared with Messages or from Safari and can integrate Apple Pay and full privacy and security. 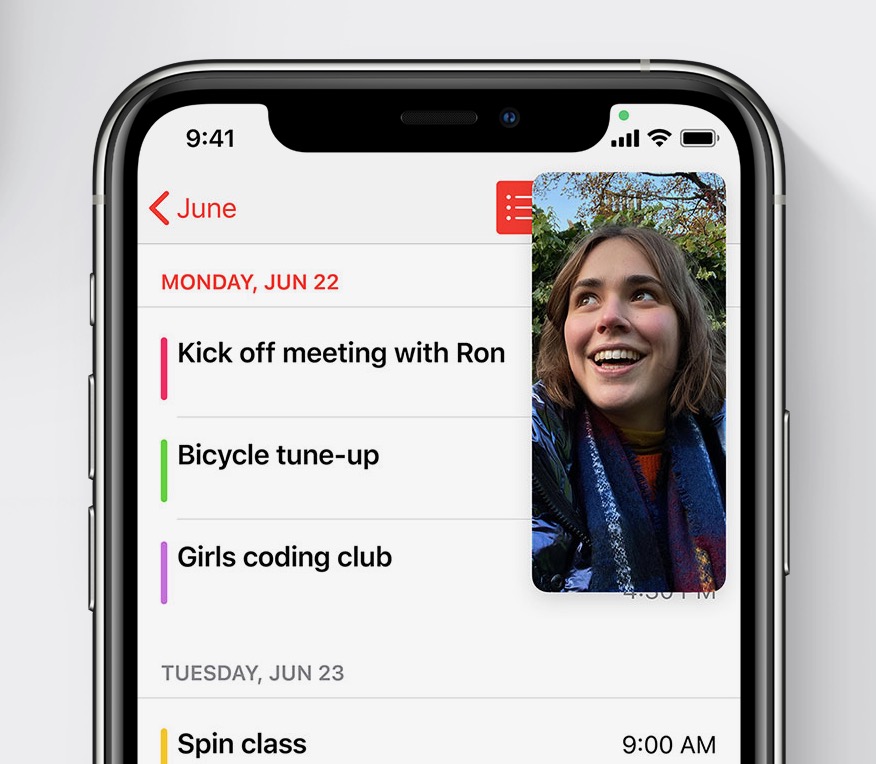 If you’re watching a video or on a FaceTime call you can open another app and still have your video floating in the corner.

You can also move the floating image to any part of the screen to suit what you’re doing. 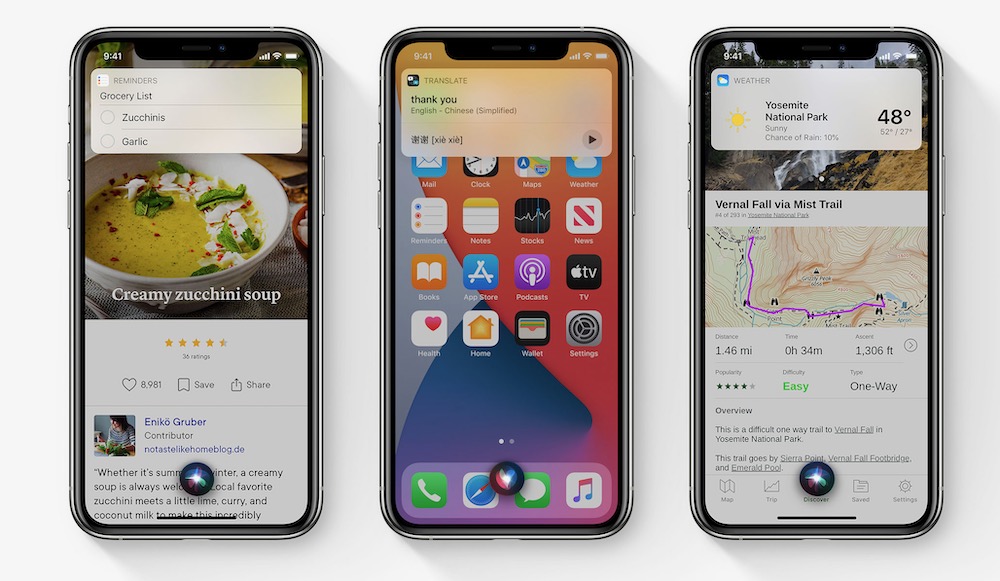 Siri will now no longer take up the whole screen when activated but instead work in the background and present its results in a small window on the screen you’re looking at so it ca stay in context to what you’re doing. 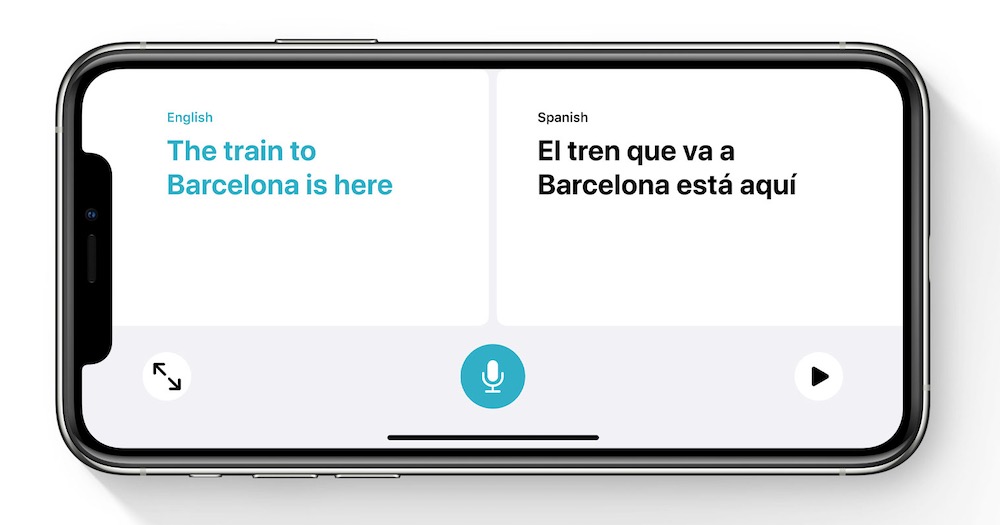 Users can now translate on the fly with the new Translate app that will work completely offline. 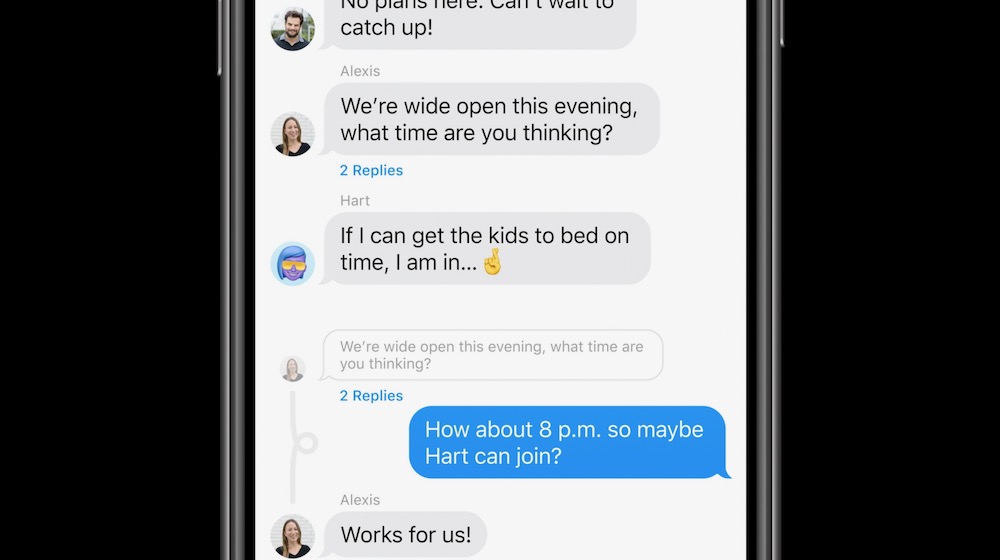 Messages can now be sorted by conversations and pinned to the top of the page.

When in a group message iOS 14 will now offer inline replies and mentions so you can receive notifications only when you’re mentioned in the conversation.

There are also a host of new Memoji options which offer new hairstyles, headwear and face coverings. 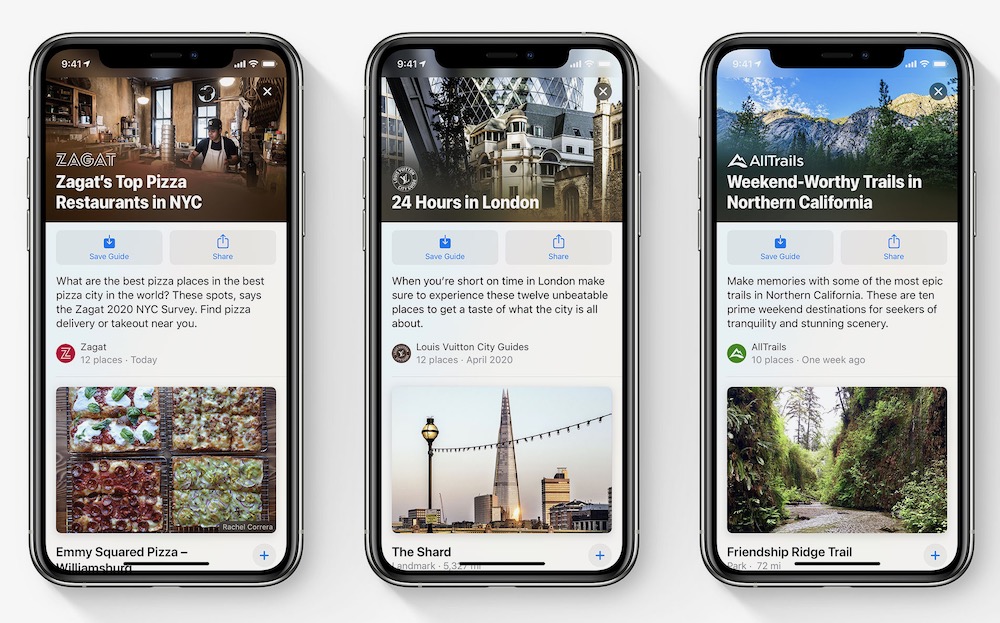 Maps have better detail and accuracy and in iOS 14 it will be easier to find where you want to go.

Guides will provide a great way to explore cities with the latest recommendations.

When navigating there are also new ways to get there including new cycling directions which offers details right down to elevations so you know if there are hills or busy roads. 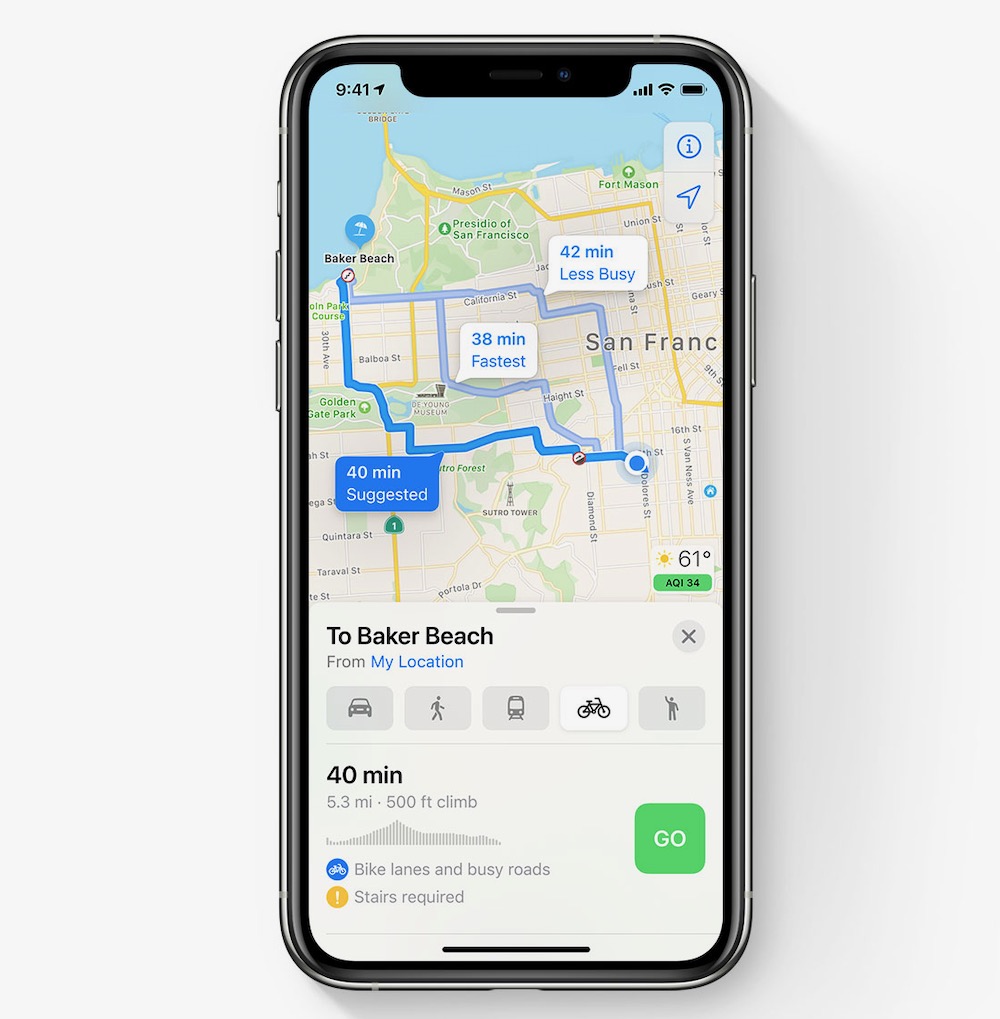 They will be available in New York City, Los Angeles, San Francisco, Shanghai and Beijing.

Electric car drivers will no longer have range anxiety with Maps helping you plan your trips so you are always with range of a charger and based on your vehicle’s current charge.

Car Play is already available on 80 per cent of the world’s new cars and in iOS 14 there are new wallpaper options and categories for your apps.

Apple is reimagining your car keys. Soon your iPhone and Apple Watch will be able  to unlock and start your car.

And you’ll also be able to share your keys through Messages and disable them through iCloud if you lose your iPhone.

Apple has been working with industry groups to use ultrawide band technology so this feature will work when your device is in your pocket or in your bag.

The first company to get involved will be BMW with the 540i.

AirPods will have even more functionality including automatic switching to detect when you switch between devices and when a phone call is coming in.

Spatial audio will be introduced to AirPods Pro and play sounds anywhere in space to create an immersive surround sound experience.

By using the gyroscope and accelerometer, the AirPods Pro can also track your head and keep the sounds coming from the right places and keep you in the middle of the action.

It will be compatible with Dolby Atmos. 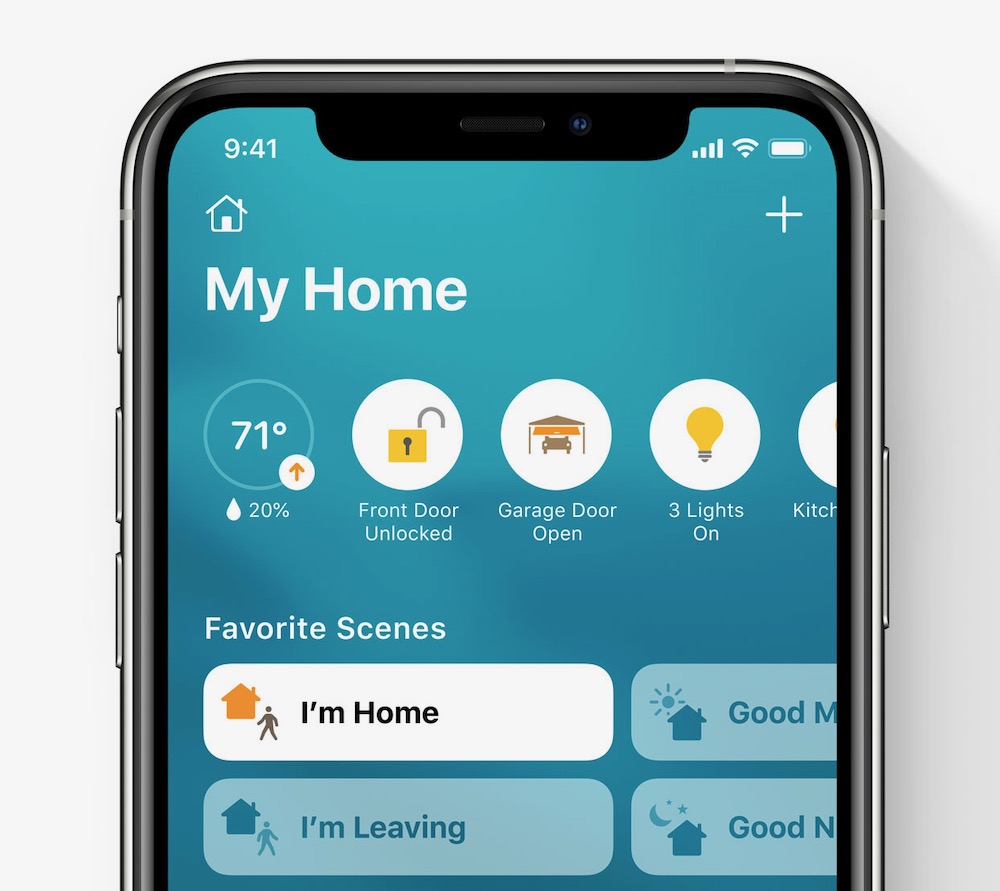 The Home app is already a huge ecosystem and controls will be added to enable easier control of lights as well as suggestions for automations when new devices are detected and added.

On the lighting side users will be able to adjust the colour temperature of their lights to suit the time of day and into the night.

Included security cameras will have the added feature of setting activity zones to filter notifications and also incorporate facial recognition to let you know who is at your door.

The Weather app and widget will now keep users up to date on severe weather events and a new next-hour precipitation chart shows minute-by-minute precipitation when rain is in the forecast.