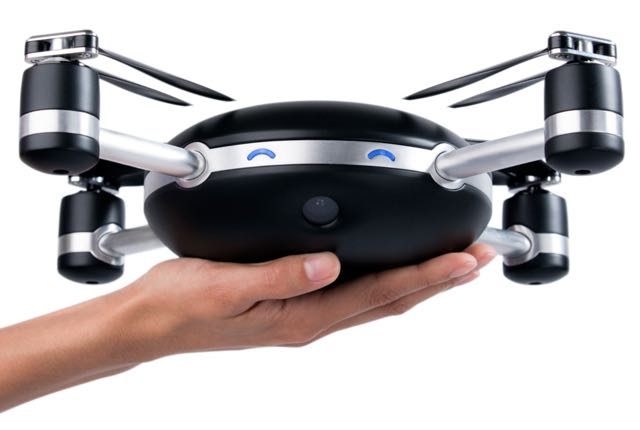 The drone has been re-imagined with the introduction of Lily – the new flying camera that pilots itself and follows you so you can be the star of your own video.

There is no remote control with Lily but rather a sensor that you wear on your wrist or keep in your pocket while you’re skiing, skateboarding, walking or running.

To launch Lily, users simply have to throw it in the air.

Lily is quite compact at just 26.1cm wide and also quite light at 1.3kg so it’s small enough to fit inside a backpack.

And onboard is a camera that shoots full high definition camera at 60 frames per second and slo-mo at 120fps along with 12-megapixels stills.

Users can stream a low-res live video to the user to a companion app on your smartphone so you can see what Lily sees.

There is no physical gimbal to take the shakes out of your shots but rather a digital gimbal that keeps your videos steady and your pictures sharp.

The drone is also waterproof with an IP67 rating so it can go up one metre underwater in the event of a water landing.

It can also be thrown into the water before take off so it can track your watersports.

The sealed battery will run for up to 20 minutes on a full charge and even land itself before running out of battery.

Lily won’t be shipping until February 2016 but are taking pre-orders at a discounted price of $US499 – down from $999 – along $US30 international shipping.