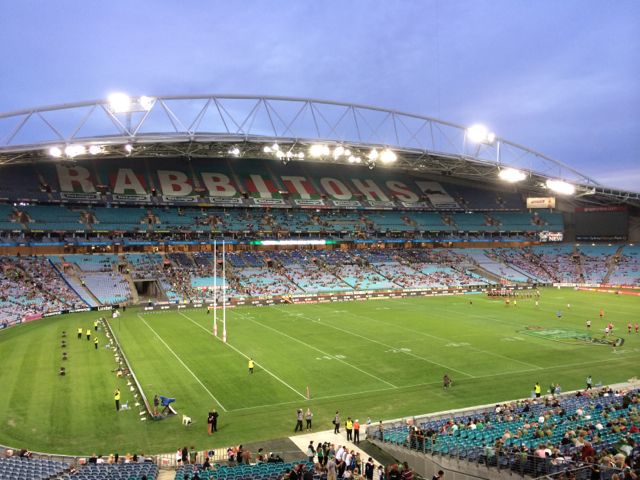 The 2014 NRL season kicked off last night at the ANZ Stadium and fans were able to access the state-of-the-art venue’s new free wi-fi network for the first time.

More than three years in the planning, the wi-fi network is available not only inside the stadium but also around the ANZ Stadium precinct.

The fans that attended the season opening match between South Sydney and the Sydney Roosters were the first to enjoy the extra connectivity.

The network was created in conjunction with Telstra and Cisco and deployed to ensure every seat in the stadium had clear access to the network.

The access points could be seen hanging over entrance ramps and along the inside of the fence.

During the NRL season opener won 28-8 by South Sydney over the Roosters, 26 per cent of the 27,282 crowd logged in to the stadium’s free wi-fi network.

Tech Guide was at ANZ Stadium last night and no trouble connecting to the “ANZS WiFi by OO” network.

The verdict about the ANZ Stadium wi-fi network was generally positive with fans tweeting about how much they liked having the added connectivity and some commented on the network’s speed.

But there were a few negative comments as well with some complaining they couldn’t connect or that the connection was slow.

Obviously the network is still a work in progress and will continue to be optimised with data that is gathered after each game.

The ANZ Stadium wi-fi network is modelled after the system deployed at MetLife Stadium in New Jersey – host of the recent Super Bowl.

Soon fans will be able to access the various camera feeds on their smartphone or tablets along with replays and other content to make ANZ Stadium even more interactive.