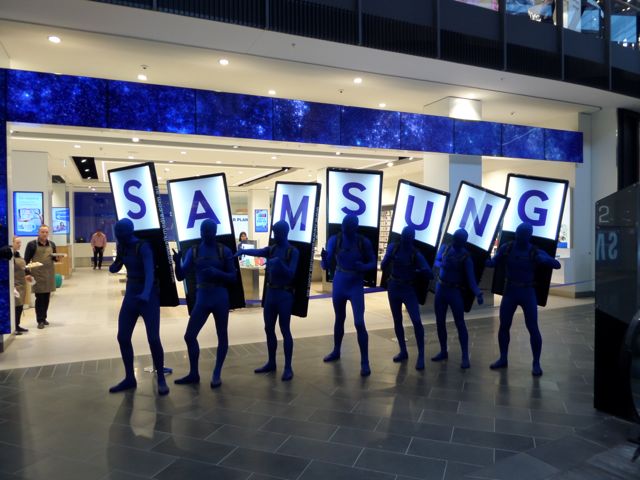 Samsung has opened the doors on its second Experience Store in Australia in Melbourne to provide an easy way for customers to interact with its wide range of products.

Situated in the Highpoint Shopping Centre in the western suburbs of Melbourne, the new Samsung Experience Store is about four times larger than the Sydney flagship store.

Samsung’s new Galaxy Note 8 was also unveiled in the store for the first time. The 8-inch device will be available in early April for $459 for the wi-fi model with pre-orders starting from today.

There are 24 Samsung displays configured across the top and side of the store with a custom-made animation of stars and blue skies constantly moving across the screens.

An Apple Store is also set to open at Highpoint Shopping Centre and will reportedly be located on the level above and directly opposite the Samsung Experience Store.

The layout of the new Samsung Melbourne store is divided into categories including Galaxy smartphones, Galaxy tablets, computers, cameras and audio-visual products.

Samsung’s Experience Store also features a kids zone so they can experience the child-friendly content already available on the device.

There are also training areas for customers who have just purchased a device and want to learn more about the key features of the product.

Tyler McGee, Samsung Australia’s vice president for telecommunications says the learnings from the Sydney store has played a huge part in the Melbourne store’s design.

“One of the things we’ve learned is that customers like to have a lot of interaction with our products and with the brand as well,” he said.

“By giving them more space we were able to have more interaction on the devices than in the smaller store.

“We’ve had a really positive response to the training and learning on the device.

The products display areas also have NFC (near field communication) points as a new way to interact with the device at the point of sale.

Here the customer can actually pick up the device and hold it against the NFC point to view the key features of the product on that particular device’s screen.

The Samsung Experience Store at the Highpoint Shopping Centre is open seven days a week and opens at 9am every day and 10am on Sundays.