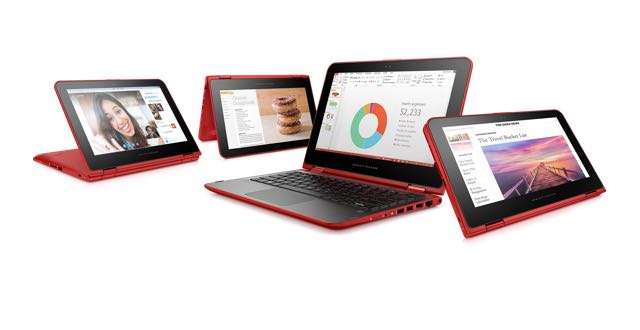 HP showcases its 2015 line-up of laptops, convertibles and desktop computers

HP has revealed its stylish new 2015 range of laptops, convertibles and desktop computers that are all compatible with the upcoming release of the new Windows 10 operating system on July 29.

These products are designed to be used on the go, in the home, in schools or in the workplace.

They also feature colourful modern designs and excellent audio output thanks to a partnership with B&O who designed the speakers for each device.

These devices have a new hinge featuring three spiral gears to ensure precise movement when the user decides to switch between any of the four modes – laptop mode, tent mode for games, stand mode for watching content and tablet mode.

The Pavilion has an 11-inch touchscreen, a fanless design and a battery that will run for more than eight hours on a full charge.

Pavilion X360s is powered by Intel Celeron N3050 Processor and has 4GB RAM and a 500GB hard drive.

Other configurations are available with faster Intel processors and an SSD flash drive.

The HP Pavilion x2 is a convertible laptop with a detachable 10-inch screen so its equally at home as a work horse or an entertainment device.

It has a latchless magnetic connector so a user can easily separate the keyboard from the screen to use it as a tablet and then easily reattach it again.

Under the hood is a quad-core Intel Atom processor, 64GB of storage, a microSD card slot to expand the memory and a USB-C port that can both charge the device and transfer data.

This 15.6-inch notebook comes with a high definition touch or non-touch screen and has been redesigned with a curved profile and metal surfaces to give it a premium look and feel.

Customers have the choice between the fifth generation Intel Core i5 and i7 processor or the sixth generation AMD FX and A10 accelerated processors.

There is room for up to 2TB of storage with an option for hybrid hard drive and SSD and up to 16GB RAM.

On the connectivity side there are three USB 3.0 ports, one USB 2.0 port and a HDMI port.

Battery life has been rated at up to 9.5 hours.

Available in 23-inch and 27-inch models, the latest HP Pavilion AIO (all in one) desktop computer has a slick design and wireless keyboard and mouse.

The edge-to-edge display has a full high definition resolution and a white rear panel with a dot pattern so it can fit anywhere in your home.

The Pavilion PC has two USB 3.0 ports, four USB 2.0 ports, HDMI port and a 3-in-1 media card reader with easy routing cables to give your desktop a clean look.

It is powered by your choice of Intel Celeron, Intel Core and AMD processors with up to 3TB storage.

If you’re looking for a new tower then you can forget about the boring colours with the HP Pavilion that comes with several configuration options.

Also onboard are two USB 2.0 ports, four USB 3.0 ports, HDMI, DVI and VGA ports and 7-in-1 media card reader that are easily accessible on the front of the device.

The HP Envy Phoenix tower is aimed at the user who is looking for high performance for high-end tasks and powerful gaming.

There are LED accents on the front of the product which has a dark aluminium chassis.

To support the Envy Phoenix tower, especially if the customer wants to connect it to a 4K display, users have the choice of NVIDIA GTX 980 or AMD Radeon discrete graphics with the option of Intel Core i5 and i7 processors.

Users can configure up to 3TB of hard drive space along with 512GB of SDD space for storing games, videos and photos.

The tower can also support dual monitor support and a wireless keyboard and mouse.

Pricing will be announced closer to launch in October.