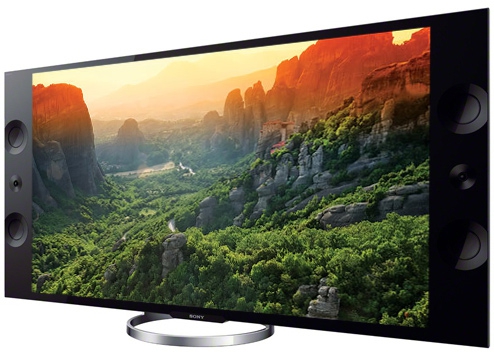 Sony’s new 55-inch Bravia 4K TV has drawn a line in the sand as the television to beat with a strong focus on excellent picture and audio quality that viewers will adore.

It’s 4K resolution – called Ultra High Definition by Sony’s competitors – is 3840 x 2160 and has many pixels as four full HD TVs stacked on top of each other two by two.

While 4K is still in its infancy and 4K content is scarce at the moment, Sony’s credentials in this exciting new category are exemplary.

These credentials have not just come from a research and development lab but from the movie sets, production facilities, post production studios and 4K digital cinemas where Sony has had skin in the game every step of the way.

The result at the end of the line in our lounge room is Sony’s 55-inch 4K TV that’s one of the best TVs we’ve ever seen.

The Sony 55-inch X Series Bravia is wider than a regular 55-inch TV on account of the fact there are speakers on either of the screen.

This adds 12cm to either side of the TV. Each of these side sections have magnetic fluid speakers to provide amazing sound.

Some other TV manufacturers are striving for the thinnest panels with pencil-thin bezels.

And while these deliver impressive picture quality the downside is not being able to incorporate traditional high quality speakers because there is just no room.

Sony decided to make audio as big a priority as the 4K picture technology and have managed to maintain the attractive look of the TV with speakers clearly visible.

And these are no ordinary speakers – they contain magnetic fluid to allow a thinner speaker that doesn’t compromise on quality.

On the back are four HDMI ports, three USB ports, an Ethernet port as well as built-in wi-fi.

It’s hard to not be mesmerised by the picture quality of the Sony Bravia 55-inch 4K TV.

You’d be disappointed if you put down $5,999 and weren’t impressed by the colours and clarity on the screen.

And there’s a lot of technology at work behind the panel to make it look this good rather than throwing together a whole bunch of extra pixels.

Each of these pixels is controlled by advanced picture processing to maintain optimum brightness and clarity.

Add to the mix Sony’s proprietary Triluminos technology that offers the widest colour gamut ever seen on a television.

The Sony 4K Bravia is closer to producing colours seen by the human eye than ever before with reds, blues and greens that are brilliant.

Skin tones are also as realistic as real life and when you put it all together you get a picture that not only offers excellent quality but that has a feeling of depth to it.

The dynamic LED lighting also comes in to play to deliver the right amount of illumination depending on the scene. As a result the contrast is a knockout with true deep blacks and definition in just right places.

There’s not much 4K content on offer at this time but what Sony does offer with the TV is a pack of eight Blu-ray Disc movies which have been mastered in 4K.

When they are played, the onboard processor of the Sony 4K Bravia knows exactly how to upscale the image to true 4K quality.

The movies in the pack include: Total Recall (2012), Battle Los Angeles, Taxi Driver, the Amazing Spider-Man, Ghostbusters, the Karate Kid (2010) and Angels and Demons.

It’s not hard to notice the clear difference that 4K brings with the amount of added detail and clarity.

We played these mastered in 4K Blu-rays through a regular 3D Samsung Blu-ray player but it was the Sony 4K TV that did all of the heavy lifting to bring it up to 4K image quality.

The rulebook for how close you can sit to the TV can also be thrown out the window because the pixels on Sony’s 4K display are so small.

You can sit pretty close to the screen and you still won’t see the pixels because they are so small.

So no matter what content you’re watching, including free-to-air TV, it is going to look even better on Sony’s 4K screen.

Fast moving images looked smooth and clear whether you’re watching sport or action movies thanks to the onboard Motionflow technology.

That’s not to say there was no motion judder. Having 4K resolution doesn’t make the panel immune as there were slight hints of it but nothing that’s going to take away from your high quality viewing experience.

The Sony 55-inch 4K Bravia is also a smart TV which means it can access content and run apps and allow second screen interaction using smartphones and tablets.

SideView is an app developed by Sony to work on iPhone, iPad and Android devices and turn them into a remote control on steroids to organise your viewing, access content and find out program information.

What you’re not going to find on the Sony 55-inch 4K TV are gesture and voice controls and other gimmicky add-ons.

The TV’s interface is quite easy to navigate with a logical menu and simple controls.

The Sony 4K is also a 3D TV which uses ultra lightweight passive 3D glasses that you won’t even know your wearing because they are so light.

And despite being passive glasses – like the ones worn in cinemas for 3D films – the results is still a full high definition experience.

The reason for this is that the Sony 4K TV has so much resolution at its disposal it can afford to lose half of it with passive viewing but you’re still getting full high definition 1920 x 1080 resolution.

The benefit of Sony’s passive system is no crosstalk and flickering that are more common with active 3D glasses.

It was great to have excellent sound to go with the dazzling picture. It offered a nice balance.

Having weak sound with such a great looking picture would gave let down the whole experience so Sony did the right thing by focussing on the audio quality as well.

The added audio quality was also something that helped justify the TV’s higher price.

The magnetic fluid speakers are placed far enough apart for good stereo separation and offer a large sound stage that sounded like it was coming from dedicated floor speakers.

Weak speakers on flatscreen TVs is the reason why soundbars and other similar products have become so popular.

The good news is you won’t need any of those products with the Sony 55-inch Bravia 4K TV because the sound is as remarkable as the picture.

The Sony 55-inch Bravia 4K TV is one of the best TVs we’ve ever seen.

It offers the type of picture and sound quality that will impress even the fussiest viewers.

This TV is the culmination of the experience and lessons learned along Sony’s long 4K journey which is combined with cutting edge technology that delivers on the promise.

The customers who are happy to pay good money for good products will not hesitate. Everyone else will just wait until the prices come down.

There isn’t a whole lot of 4K content around now but it’s coming. And when it does arrive and you’ve got a TV like Sony’s 55-inch 4K Bravia – you’ll be more than happy with your investment.